Throwback Thursday: Tasting (and Drinking) Around the World at the Epcot Food and Wine Festival 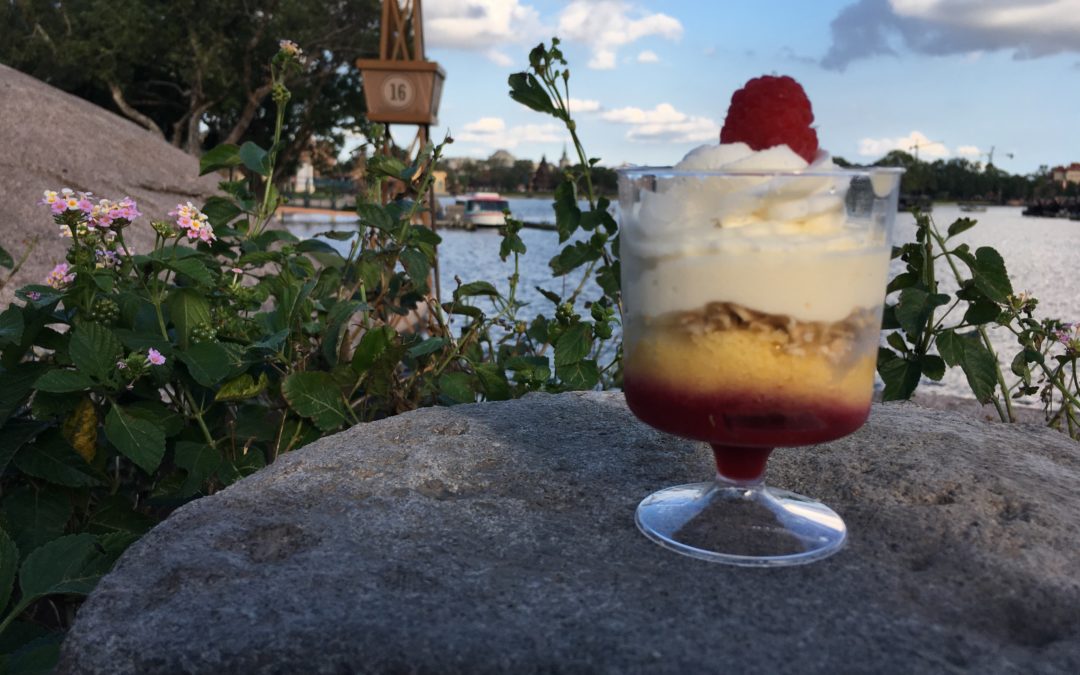 **Note this is a Throwback Thursday articles based on the 2017 Epcot International Food and Wine Festival, some things might change for the 2019 Festival**

I’ve been fortunate enough to take three separate trips to the 2017 Epcot International Food and Wine Festival this year, and I had the opportunity to taste (and sip!) quite a few of the offerings. There were some definite hits, but also a few misses. Here is a round-up of what I thought were the best of the best along with a few tastes that, in my opinion, were not up to speed. 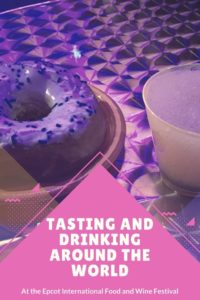 For our little taste tour of the Festival, I’ll start in Future World where there was a new indoor area right next to Club Cool called the Light Lab. This area was full of fun drinks that glowed in the dark and was staffed by “scientists” in lab coats. My husband had the Space Flight of beers (Left Hand Brewing Company Polestar Pilsner, Playalinda Brewing Company Robonaut Red Ale, Elysian Brewing Space Dust IPA) for $9.00 and really enjoyed it since these were all brews he had not sampled previously. My daughters got the RGB Citrus Apple Freeze ($3.75 – nonalcoholic) and the Glownut ($3.00), a giant glow in the dark donut, respectively. They both liked them, and I truly appreciated the novelty, but they were just too darn sweet for me. 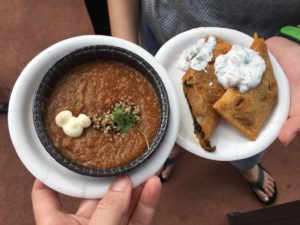 One of our favorite kiosks at the Festival was Africa.

Tip: You can use your DDP snack credits for many of the (nonalcoholic) items. It makes the most sense to save the credits for the pricier items – the New England Lobster Roll at Hops and Barley, for instance, is $8.00.

We then moved behind the building to the new Coastal Eats booth where we got a Lump Crab Cake with Napa Cabbage Slaw and Avocado Lemongrass Cream ($5.00) that I thought was really tasty, and the slaw, something I often leave behind, was devoured as well.

Moving on to Showcase Plaza, there were a number of booths crowded along the lakefront. My vegetarian daughter fell in love with the Roasted Beet Salad with Green Beans, Feta Cheese, Minus 8 Vinaigrette and Toasted Walnuts ($3.75) at the Farm Fresh kiosk. She had it THREE TIMES! This from a girl who had previously refused to even taste a beet. She also liked the Loaded Greek “Nachos”: Pita Chips, Meatless Sausage Crumbles, and Vegan Tzatziki ($4.50) from the Greek booth. This is one of the few vegan-friendly offerings at the Festival. 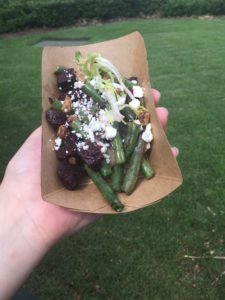 My daughter’s favorite taste at the Festival: the Roasted Beet Salad from the Farm Fresh booth.

Heading into the World Showcase, the Mexican booth always had long lines, but we braved them to try the Mexican Mule ($9.25) and the Spicy Apple Margarita ($10.75). While I did like both drinks, the Mexican Mule was more unique. For margaritas, I prefer to go to La Cava del Tequila inside the Mexican Pavilion.

Tip: You can purchase a Tasting Sampler that gives you 8 “credentials,” or coupons, to use at the booths. The sampler costs $65 plus tax, so each coupon is worth around $8.66. To get the most bang for your buck, you would probably want to use this on alcoholic drinks.

Probably our overall favorite kiosk at the Festival was the Africa booth. We liked all the tastes here and we got the Spicy Ethiopian Red Lentil Stew with Vegan Yogurt and Quinoa ($4.50) and the Spinach and Paneer Cheese Pocket with Mint Raita ($4.00) twice. The stew was indeed spicy, but we loved that it was paired with the superfood quinoa rather than the usual rice.

At the Italy booth, my husband and I finally got a chance to sample the elusive Frozen Margarita with Limoncello and Tequila ($10.00). We had tried to order this last year and the machine was always broken or the drinks were “not ready.” I wouldn’t say it was worth a year’s wait, but it was mighty refreshing on a very hot September day. My girls got one of their favorites, the Cannoli al Cioccolato: Chocolate-covered Cannoli filled with Sweet Ricotta, Chocolate and Candied Fruit ($4.25). 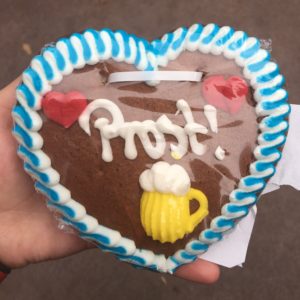 One of the few “misses” for us at the festival – a German gingerbread heart.

The girls have a definite sweet tooth, and since we used to live in Germany, they wanted to try the Lebkuchenherz: Decorated Gingerbread Heart ($7.00) at the German kiosk. While this was a great use of a DDP snack credit, it turned out to be one of the worst things we tasted at the Festival. It was pretty enough to look at, but it tasted like stale cardboard.

Tip: Pick up a free Festival Passport from the Festival Center or one of the shops so that you can check off all the goodies you taste and make notes on which ones are your favorites.

On a different visit, we went to the Belgian booth so my girls could sample the Belgian Waffle with Warm Chocolate Ganache and Whipped Cream ($4.00). The waffles are freshly made while you wait, so the line can get long. 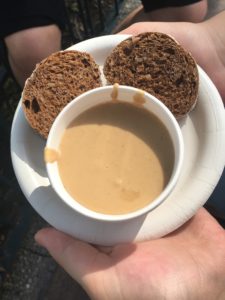 The Warm Irish Cheddar Cheese and Stout Dip from Ireland was so good we had to finish it with a spoon.

Around the corner and close to the England Pavilion was the Ireland kiosk with two of our favorites at the festival: the Bunratty Meade Honey Wine ($5.50) and the Warm Irish Cheddar Cheese and Stout Dip with Irish Brown Bread ($4.75). The cheese dip was thick and hearty and so yummy that we actually took a spoon to finish it off. The booth also features a Twinings® Pumpkin Chai Tea Frozen Cocktail with Caramel Vodka ($9.75). This is really refreshing on a hot afternoon, but it is quite sweet and almost like a dessert.

The Tipsy Laird: Whiskey-soaked Cake with Lemon Cream and Toasted Oats ($3.50) at the Scotland booth just outside the Canada Pavilion was absolutely lovely to look at (it’s the photo at the top of this article) but didn’t quite live up to its appearance. But the Citrus Thistle featuring Hendrick’s Gin ($10.00) was one of our favorite alcoholic tastes at the Festival.

Now we’ve rounded the loop and are headed back to Future World and the exit, feeling full and happy. While I’m sad that the Festival will be closing next month, there’s always next year to look forward to!

Want help planning your visit to the Food and Wine Festival? Get a FREE quote from Patricia at All for Dreams Travel, the Official Travel Agent at Tips from the Disney Divas and Devos.