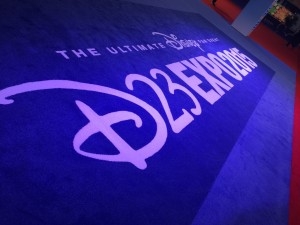 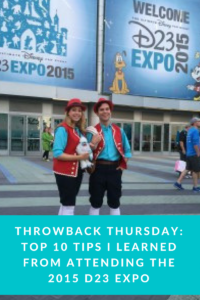 The D23 Expo 2015 was my 2nd Expo ever – I’m slightly new to the whole Expo experience. And I tried to be as prepared as possible for what was to come. I knew crowds would be crazy and hot merchandise would fly off the shelves quicker than Lightning McQueen can make it around the track, but I was determined to have a great experience nonetheless! As the days went on, I noticed a few things that helped me get through the crazy parts of the D23 Expo, as well as some tips that saved me a bit of money along the way. Here’s a compilation of 10 Tips I Learned from Attending the D23 Expo 2015.

Annual Passholders to Disneyland Parks (with parking included on their pass) can forgo the $15 parking fee if you park in Disneyland Park Parking areas – NOT Convention Center Parking. Simply park on Disney property and head on over (my favorite is the Toy Story Lot since it’s so close). Depending on where you park you may have a bit of a walk to and from your car – but you saved $15 along the way!

The biggest D23 Gold Member perk for the D23 Expo is that you get into the Expo an hour earlier than everybody else! This gives you the opportunity to see some of the Expo floor before general admittance as well as the chance to line up at the popular stores like Mickey’s of Glendale, The Dream Store, and the Disney Store before the crowds set in and form the 2-3 hour lines you see throughout the day.  Whether you grab some exclusive merchandise or some pictures without any crowds in them – getting in early as a Gold D23 Member is really worth it at the D23 Expo!

I’ve learned that if you aren’t the first few thousand of people into the D23 Expo floor, your chances of getting that highly sought after merchandise is very unlikely. There are people who camp out overnight just for the chance to be the first few in the lines for those stores which is tough to compete with. The stores only release a limited amount of those items each day (say LE 300 would be 100 items a day) and that makes them sell out even quicker. Unless you take the time to stand in line for a few hours, or have connections, your best bet would be to look for that merchandise online – although it might have doubled or even tripled in price by then.

However, the Dream Store lines fluctuated throughout the day and as I noticed they kept PLENTY of merchandise in stock (like Alex and Ani bracelets, Pandora Charms, Tshirts, etc.) Most of this merchandise was not Limited Edition so it was possible to grab these items throughout the weekend and have an easier time doing so.  Just because the lines are long doesn’t mean you shouldn’t try to get what you want! Just be prepared for long lines and a lot of waiting. But if you are social like me, you can chat it up with people in line or trade pins or cards with guests and time flies by a lot quicker! Plus you could make Disney Fan Friends For Life!

The D23 Expo App also directly connects you to D23’s social media! You can see what they are posting as the weekend goes by, and they encouraged you to add  #D23EXPO and @D23EXPO in your posts to join in on the fun. It was great to follow them throughout the day because every so often they would post that a limited trading card was available somewhere on the floor, or that the line for an event was still open to guests, etc. The app was useful before (for planning) and during the D23 Expo as it provided me with plenty of options on where to go, what to eat, etc. I made sure to check it all weekend!

My tip is to definitely have a smart device on you at all times during the Expo. Whether it’s a smart phone (the most popular) or an ipad or something – if you can post from it than  bring it! I mean, don’t your friends and family want to see all the fun you’re having at the D23 Expo anyways?

I would recommend bringing a portable charging device/battery extender with you in these types of situations. I personally brought a Jackery – Giant Edition with my Mom and I that we used to charge our phones throughout the day. We charged it each night and could charge each of our Iphones 2-3 times during the day. I just connected a cord to the Jackery and my Iphone and the Jackery was small enough to fit in my pocket, so it was discreet. This was a life-saver since my phone battery was being used up with all the social media I was connecting to. Give this kind of thing a try next time you go to the parks or to an event like the D23 Expo!

The TOMY booth which showcased some new Disney themed toys including the Good Dinosaur had Inside Out and Miles from Tomorrowland buttons and the ABC pavilion periodically gave out Disney Channel and Disney XD pins. Bookmarks and pens were everywhere. Be sure to fill out entries into many of the contests because you can get free cups or trivia cards, etc. just for signing up. The Micechat booth (one of my favorites)  had lanyards you could wear, buttons to give out, and had a map that if you got each booth on the map stamped you were entered into a drawing to win a big prize.

The most popular FREE thing I think of the entire D23 Expo were the trading cards. You got a starter set with 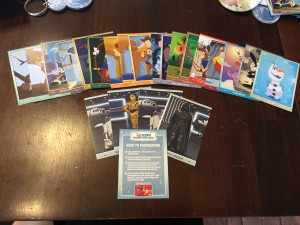 different characters in your Expo Souvenir Guide and there would be card stations throughout the Convention Center that would periodically give out other random cards. Some were so popular (like Darth Vader and the Hippo from Its A Small World) that mobs would form. But if you wanted to collect all 30 cards you could head to the Disney Visa booth to trade with other guests. I collected many of them and managed to get an Ariel, Oswald, Darth Vader, and even the 3 Fairies, and it was so much fun trading with people in line and at the Visa booth! 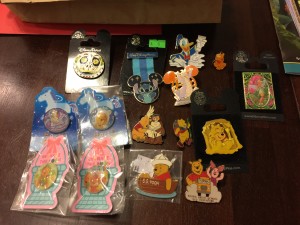 BONUS TIP: This could be possibly the most important tip I could give to someone planning on going to any D23 Expo: DON’T TRY TO DO IT ALL!!!! There are over 260 things to see, do, and participate in during the Expo and it is nearly impossible to accomplish everything. And trying to go from early in the morning to late at night with no breaks in between will just exhaust everyone in your party. To keep from being burnt out, make a plan of accomplishing 1-2 major things a day with some leisure time to explore the show floor at your own pace.  Try to let the day flow by naturally, taking as many breaks as you need them when you need them. Whether it’s sitting in the D23 Lounge, eating a snack, letting the kids play in the Play Zone on the 2nd floor, or even going outside and stretching – taking those 5-10 minutes of relaxation can refresh your entire day! You may need upgrade to multiple days at the Expo to keep this schedule, but it just might be worth it!

Oh, and HAVE FUN! 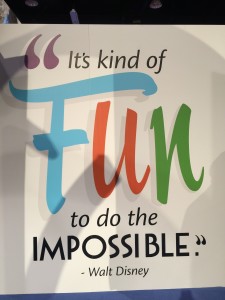 Alrighty, these are the most important tips I thought you guys should know before heading to a D23 Expo. Did I miss anything? Do you disagree with any of my tips? Feel free to comment what you think!