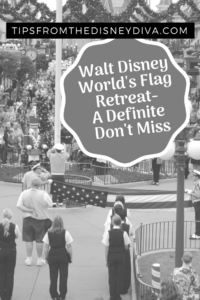 I have been to Walt Disney World thirteen times in my life and still haven’t seen it all. It seems like each trip, I find something new that has always been there and I just haven’t known about it. On my last visit I made a new discovery that will become a family tradition for every future visit. My family and I entered Magic Kingdom late one afternoon to attend Mickey’s Very Merry Christmas party and were going to take the train back to Adventureland to ride a couple of rides while we waited for the party to start. As we climbed the stairs of the train station, we noticed a crowd gathered on the platform looking out towards Main Street USA. Knowing that at Disney World, a large gathering of people means something interesting is about to happen, we decided to see what all the fuss was about, and I am certainly glad we did.

We found a couple of seats, and I got my camera out and ready for whatever was about to happen. It turns out, we were about to witness the most moving, and apparently lesser known, ceremony I’ve ever seen at Walt Disney World. The Flag Retreat ceremony happens in Town Square at the Magic Kingdom every evening at 5pm. Each day, a Veteran is chosen at random to take part in this ceremony. 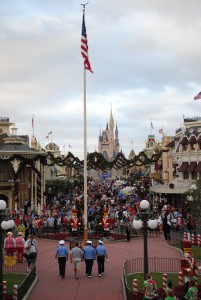 To kick everything off, a guest from the crowd was chosen to help lead everyone in The Pledge of Allegiance. Then The Main Street Philharmonics played “The Star Spangled Banner” as the flag was lowered. 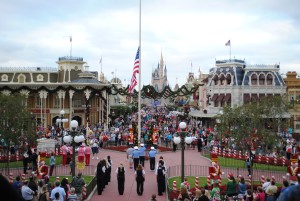 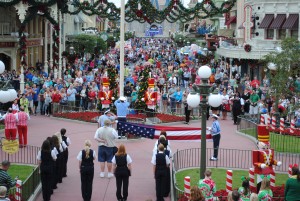 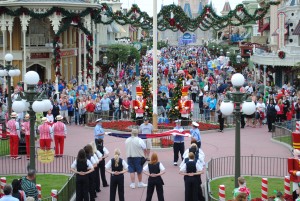 Finally, the Honorary Veteran is presented the flag and is announced to the crowd. The Honorary Veteran also receives a certificate, a pin, and pictures taken by a Disney Photopass photographer during the ceremony. It’s a fairly quick 15 minute ceremony, but it was easy to tell it the best part of that gentleman’s day, and it was definitely the best part of mine as well. 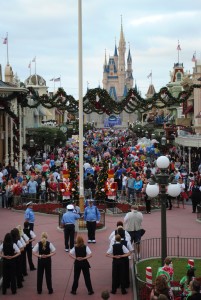 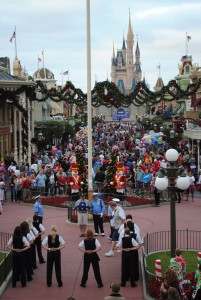 I am not ashamed to admit that I got sort of choked up during the ceremony. Both of my grandfathers served in World War II and made sure to instill a strong sense of pride and patriotism in my sister and I. The fact that the Honorary Veteran that day had also served in World War II made it a little more special to me. I love seeing the men and women that put their lives on the line to serve our country honored, and can’t believe I hadn’t heard about it any of the other times I had visited. Apparently lots of people knew about it, or happened to stumble upon it, because both the train station and Town Square were crowded with people watching it.

If you have never witnessed the Flag Retreat ceremony, you owe it to yourself to make time during your next visit to check it out. There are lots of great places along Town Square to view it, but I actually prefer the train station, because it gives you an overall view you wouldn’t get from street level. Be sure to arrive early as all the good spots fill up quickly like they do with any other show or performance at Walt Disney World.