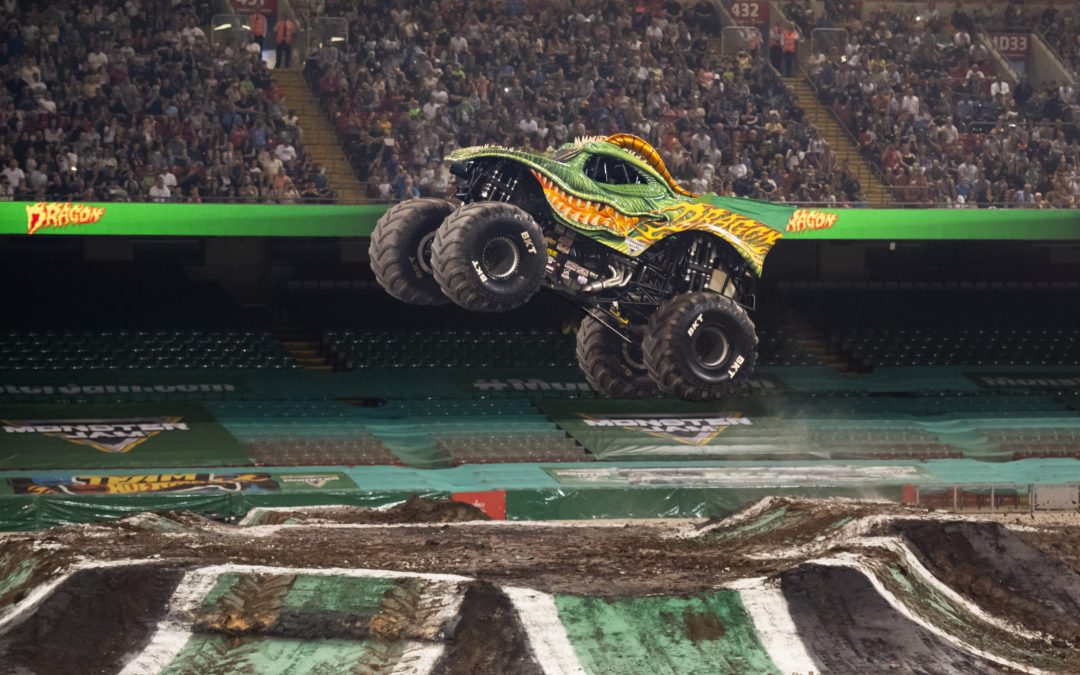 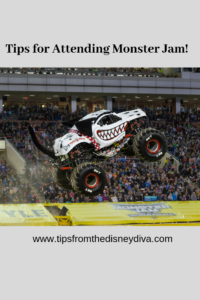 As you know, every once in awhile a Feld Entertainment production rolls into an area where one of our writers live, and a couple of us are blessed to get to review one of their many family friendly shows. Our writers have attended Disney on Ice, Disney Live!, Marvel Universe Live! and Monster Jam events, and each one is a truly unique and fun experience for the whole family. Yesterday, I was able to attend Monster Jam’s most recent competition in Albuquerque and it did not disappoint and figured I’d share some of my tips with all of you.

If you are unfamiliar with Monster Jam, it is an event where male and female athletes compete by driving monster trucks or ATV’s in six events: Monster truck racing, ATV obstacle course, the two wheel challenge, spinning donuts, ATV racing, and everyone’s favorite, the Monster Jam Freestyle competition. There is also an interactive opportunity for audience members with cell phones to have a chance to cast votes on how they felt each athlete performed during the competition. These scores are then calculated and used to determine the winner of a few of the events. Because of the show’s competitive nature, no two events are ever identical, even in the same town. It is completely unique every time. 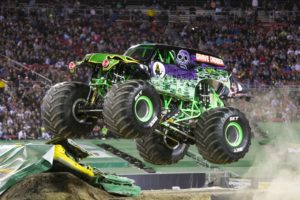 Wondering if you should go? Here are some common questions that might be going through your head.

While ultimately you have to make that judgment call, for my family, the answer is yes! This was our third year attending Monster Jam, and everyone enjoyed it. I have four kiddos, so finding something everyone can enjoy can be challenging. My youngest is almost two years old and I wasn’t quite sure how he’d handle it or whether or not he’d leave his protective headphones on (Disney Diva Tip: It is very noisy inside and I highly recommend bringing ear protection or purchasing some at the Monster Jam event for both adults and children in your party). I also scanned the audience to see if anyone else had brought babies or toddlers, and while they were not the majority, we did see quite a few. My youngest actually did enjoy the show and had fun yelling, “Car! Car!” every time a new monster truck came out, proving that even the littlest Monster Jam fans can have a good time. Fun Fact: One of the athletes, Zane Rettew, who drove the Monster Truck “Stinger Unleashed” went to his first Monster Jam event at the age of two, so you never know what might spark your child’s interest and help them follow a dream. 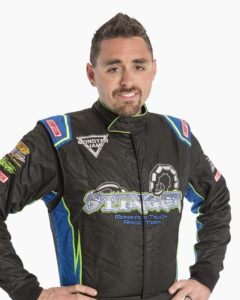 Sometimes I get asked if my daughter enjoys it as much as the other Feld Entertainment events, because traditionally, monster trucks events are usually associated more with being “a boy thing.” But my daughter loved it and was cheering on the female competitors in particular, especially Linsey Read, the athlete and driver of the monster truck, Scooby Doo. This is the beauty of Monster Jam… it is one of the only events in the world where men and women can truly compete at the same level, where size, strength, and stature don’t matter. Instead, everything boils down to the quick reflexes, skill, practice, and determination of the extremely talented Monster Jam athletes.

Lastly, when Feld Entertainment says it’s something for the whole family, they really do mean the whole family. Monster Jam athletes take this to a whole new level with some of their own athletes being related to one another! In our event, we saw Darren Migues, the athlete driving the monster truck “Dragon”, competing against his daughter, Kaylyn Migues who was driving the monster truck, “Monster Mutt Dalmatian”, spouses competing against each other in both monster truck and ATV events, and even one married couple competing alongside each other as Lindsey Read and her husband, Jerrard Warhurst both represented Scooby Doo in the monster truck and ATV competitions. 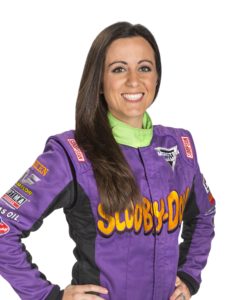 Do we get to meet to take pictures and/or get autographs with the athletes and their vehicles?

Yes! The best way to do this is to attend a Monster Jam Pit Party. This is a separate ticketed event (so you will need both a ticket to the pit party and another one to the Monster Jam competition itself), but it is a great experience. Disney Diva Tip: The Pit Party is a great place to put all of your Disney theme park training to use! We all know the importance of arriving early to an event…. The earlier you get there, the fewer people there are to clog up the lines and you can take more time to snap photos, get autographs or talk with the drivers! Just like meeting Disney characters or waiting in line for your favorite attraction, make sure to arrive at the pit party early!

Our family really enjoyed interacting with the drivers and taking photographs and getting autographs. The athletes will sign anything you put in front of them (we saw everything from merchandise to shirts to someone’s arm), but one fun way to collect signatures is to have the athletes sign a program. Programs cost $10 and can be purchased at various places throughout the venues.

Other popular events at the Pit Party included paying $20 to stand by a green screen and be photoshopped into the monster truck of your choice as its new driver. (You could fit up to two people in each photograph) or buying the always popular snow cones in a souvenir cup for $15.

Can I take pictures and videos of the events?

Yes! This is a very interactive event. You are strongly encouraged to share your pictures with the hashtag #MonsterJam. As mentioned before, you are also asked to pull out your smartphones, go to www.judgeszone.com and vote for each athlete to help determine the ranking scores for some of the events, specifically, the two wheel challenge, the donuts, and the freestyle. You only have twenty seconds to lock in your score though, so if you want your opinion heard, make sure to vote. Disney Diva Tip: There were a couple of calls throughout the event where fans were not quite happy with a particular score. So again, if you thought someone did really well, make sure to cast your vote so your opinion can be heard! 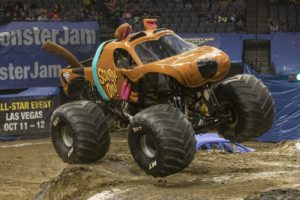 What happens at Monster Jam?

Athletes take turns competing in each of the six events. Racing, ATV Obstacle Course, and the Two Wheel Challenge are up first, with a brief intermission before the competition resumes with the Donuts, ATV Race and Monster Jam Freestyle events. As I mentioned before, each show is unique, so you can never guarantee who will win, but my children (who were pulling for both Scooby Doo and Dragon to win), were excited to see that Scooby Doo won the Racing, Two Wheel Challenge, and Freestyle events, Dragon won the ATV Obstacle Course, Grave Digger won the Donuts event, and Stinger Unleashed won the ATV Racing event. As I’m sure you figured out, Scooby Doo won the “Best Overall” title, which sent my children into a jumping frenzy as they cheered on Linsey Read.  But no matter who you see compete in a Monster Jam event, you are sure to have a great time.

Where’s the best place to sit?

Again, that’s a personal preference and depends on your venue. I honestly don’t think there’s a bad seat in the house at the Tingley Coliseum because so many of the events happen all around the arena. You can feel the vibrations caused by the monster trucks, hear the roar of their engines (so don’t forget your protective ear gear!), and if you’re really close to the front, may even have mud from the arena flung onto you.

How do I find out if they’re coming to a city near me?

That’s easy! Just head over to Monsterjam.com for more information. For those of you in New Mexico, you still have time to see Monster Jam’s final event in Albuquerque this evening, March 17th! And for those of you who live in the Orlando area, or who are planning on being there in May, Monster Jam will be hosting the Monster Jam World Finals in Orlando, FL May 10th and 11th. You’ll definitely want to get your tickets to see some of the best drivers in the world compete against one another as the battle to see who is the best of the best. As one of the announcers described Monster Jam, “It’s unexpected, unscripted, and unforgettable.”

Disney Diva Disclaimer: I am a Feld Family Activator and my family and I received complimentary tickets in exchange for my review of this show. While we did receive tickets for free, we pride ourselves on our honesty in our reviews, and all opinions in this article are 100% my own, and not influenced in any way.