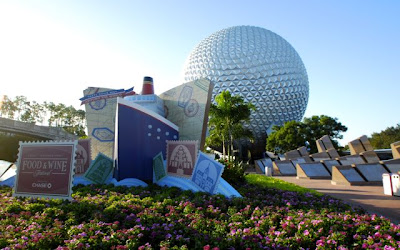 By: Nick the Disney Devo
It seems that every year Epcot’s International Food and Wine Festival gets bigger and requires more forethought and planning. The dates for the Festival are September 27th- November 11th.

I usually check out what the Disney Parks Blog, the Disney Food Blog , and the Food Festival Blog, and of course, this blog, have posted for the latest information and tips for planning.

Here’s what we do to plan.

To start, there are several tastings, seminars, and special events, many of which require reservations.
Pick which ones you’d like to attend, and call 407-WDW-FEST (939-3378).
I check out park hours during my visit. I’m a morning person, so the plan is to go to one of the other parks with early Extra Magic Hours, have lunch at that park, and take an afternoon break. We’ll then visit Epcot during the evening. If possible, we avoid the weekends. That’s when a lot of locals go and it gets VERY crowded.
On 2 days, usually Friday and whichever day Epcot has early EMHs, we’ll hit the food booths early, and visit another park in the evening.

Also, as soon as the menus come out for the booths, we’ll go through it and decide what interests us.
I make a copy of this paired down list, and pair it down even further by highlighting the must haves.
Pacing yourself is key, for a variety of reasons, which is why I pick those must haves.

Financially, this is an expensive event if you plan to try a bit of everything. Sure, on the surface, $3-$7 for a sample may not seem like much, but this adds up quickly!
As for paying at the booths, we get gift cards. It’s quicker than cash, and an easier way to keep track of what you are spending. They sell little ones with wrist bands, so they are also convenient.

Then there is the alcohol, which can add up even faster than the food.
I have tried the suggested food and wine pairings in years past, and then had a beer or 2, and then a mixed drink. This is a bad idea. Trust me!

We’ll be at the Festival during it’s opening week, so stop by the Facebook page for photos.

I hope some of these tips help, and perhaps we’ll see you at the Festival! Enjoy!

Portions of this article were originally posted on the Disney Musings Blog.