Together In The Dream By Suzanne and R.J. Ogren, A Book Review About the Early Days of Walt Disney World 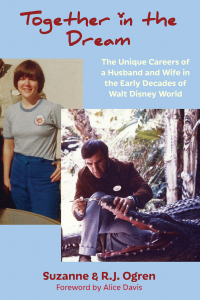 “Together in the Dream” written by Suzanne and R.J. Ogren

It’s long been one of my dreams to meet or actually speak to someone involved with the Walt Disney World Resorts who was there in the early days of the Walt Disney World Parks being opened. Whether it be an Imagineer, Cast Member who operated the rides, former character, or an artist.  I love to read stories about the Disney Parks from long ago, about attractions I visit now and attractions I never had the opportunity to visit.  I am a member of several Disney fan based groups on Facebook.  It was through one of these groups that I recently “met” an artist who has had the pleasure of working on several attractions at Walt Disney World Resorts.  I was instantly enchanted and intrigued by his stories.  I was even more thrilled when he said that not only was he a former cast member, but his wife was also.  Together, they have written a book, Together In The Dream: The Unique Careers of a Husband and Wife in the Early Decades of Walt Disney World. Yes!  This is the perfect book for me, I get to read stories from people who did amazing work at Walt Disney World Resorts back in the 1970’s, it doesn’t get better than that. 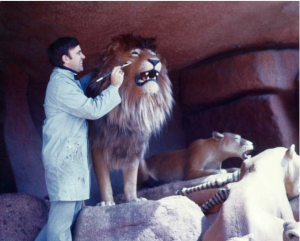 I contacted Mr. Ogren and asked him if he and his wife would be willing to let me write a book review, to which they graciously agreed.  I’ll be honest, I can’t tell you a lot of what’s in the book, I would much rather you read it for yourself.  If you consider yourself any sort of Disney addict, you will WANT to read this book.  I can give you a little background on the Ogren’s.  R.J., also known as Randy, is an extremely talented artist.  He has worked on numerous attractions along side three other artists, the four of them being the original management artists at Walt Disney World in the 1970’s.  This amazing group of artists has worked on attractions like Pirates of the Caribbean, applying skin to the Audio-Animatronics, Jungle Cruise, painting and applying fur to the animals, Peter Pan’s Flight, the ghosts of Haunted Mansion, and so many more attractions we know and love.  All of this information is discussed in the book.  You will get a true feel for the personalities of those who worked so very hard behind the scenes. 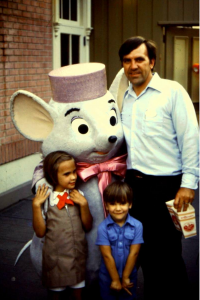 Suzanne as Bianca, posing with R.J. and their children

His beautiful and talented wife, Suzanne, who is not only a wonderful dancer, but an actress as well, also worked at Walt Disney World Resorts.  For quite a while, she played characters such as Sleepy, one of the Seven Dwarfs, as well as each of the other dwarfs at some point or another, Bianca from The Rescuers, and Mr. Smee from Peter Pan, the mice from Cinderella, the White Rabbit and Robin Hood.  Suzanne, while playing Sleepy, also got to walk and dance in Mickey’s 50th Birthday Parade, how exciting that must have been. 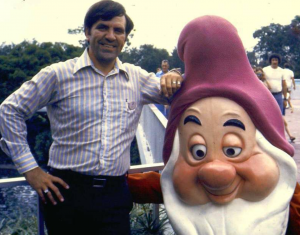 To be truthful, most autobiographies take me a little while to “really get into”, but by the end of the very first chapter of “Together In The Dream”, I was actually sporting a HUGE smile, which was a little strange as I was reading it in my car while waiting in parent pick up line at my son’s school.  I loved this book!  It describes R.J. and Suzanne’s struggles to first, become employed by Walt Disney World, and then the ups and downs they experienced while employed with Disney.  They take you through the opening of Disney’s MGM Studios, now known as Disney’s Hollywood Studios, as well as the beginning stages of Epcot being built.  The anecdotes, behind the scenes pranks, and stories are all just so entertaining, as well as giving a little insight to the difference in the parks then and now.  Who doesn’t like behind the scenes stories of our favorite place?  I know I enjoyed reading them. 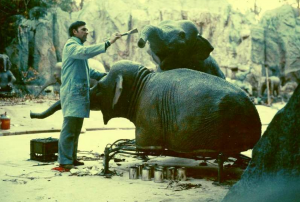 R.J. Ogren doing refurb on an elephant from Jungle Cruise

After their careers with Disney, R.J. and Suzanne have had other successes.  Besides this book, they have each written a book on their own.  R.J. has written The Design of Fear, while Suzanne wrote a book titled Ribbons.  They also have a sequel to “Together in the Dream” in the works, very close to completion (I’m very excited about this!)  They have written television scripts.  They are both hugely involved in theater, acting/directing/producing.  They have had many adventures beyond Walt Disney World, and are truly a fascinating couple. 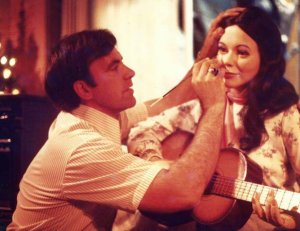 R.J. touching up Trish from Carousel of Progress

Again, I don’t want to give away too much of Together in the Dream, I truly want you to read it and enjoy it for yourselves.  I want you to experience the joy I felt as I read about R.J. and Suzanne’s triumphs in achieving their dreams of working for Walt Disney World.  If you are interested in ordering a copy, you can find one here.  If you would like to visit their website to learn more about their years with Disney, check it out at rjogren.com.  Are you more prone to visit Facebook sites?  Then, never fear, R.J. has not one, but TWO groups you can join to learn more about the Ogrens.  You can find them at RJ Ogren and Disney, and The Haunted Mansion and Beyond With RJ Ogren.

But the best news is that R.J. and Suzanne Ogren have generously agreed to partner with Tips from the Disney Divas & Devos in GIVING AWAY a copy of Together in the Dream! So how do you enter? Just click on the Rafflecopter entry form below! Good luck!

***Disclaimer – All of the photos used in this article belong to R.J. and Suzanne Ogren.  They have generously given me permission to use these photos in this article.  We at Tips from the Disney Divas and Devos hope you enjoy reading our articles, and encourage you to share any you feel may be of interest to someone else. We do ask, however, if you choose to share the photographs attached to our articles, you give credit to the photographer. Thank you for your cooperation and sharing our love of Disney!

All entries will be verified by Tips from the Disney Divas and Devos. You must LIKE each Facebook page for your entry to count.