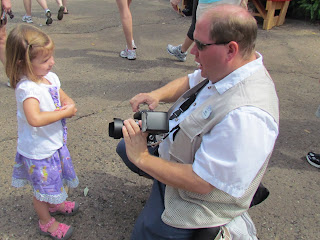 As a former Cast Member I thought I’d share with you today my Top 10 so that you can help make our day better as we make yours better.

1- People who try and cut in line. I dealt with this a good deal at Character Greetings where families would try & cut in front of others. This can get you kicked out of WDW. Don’t act entitled ! I just tried to diffuse these situations ASAP before fights would start!
2- Extremely Large Groups My friend was working at Space Mt one day & it was broken down. My friend explained this to a Brazilian Tour Group to only get spit on & kicked at from this group! I attended Fantasmic and a large group around me was overly loud & ruined my first experience of seeing Fantasmic but there are SO many of them it is hard to control sometimes. If you’re in a large group bring your PATIENCE and be nice to everybody! VERY Frustrating at times but they taught me patience 😉
3- People who think if you rent a wheelchair that you automatically get to go through every exit of any attraction. There were levels in passes when I worked at WDW: red, yellow, & green. MANY people tried to go through the exit on Winnie the Pooh. I understand some people need this service but 80% of the population at WDW does not & is is unfortunate people try to abuse the system. I would get dirty looks a lot after informing guests of this. If you’re going to use a wheelchair just be patient because each Cast Member is trying their best to ensure the system isn’t abused.
4- Guests trying to stand up on rides and/or trying to take props from rides. I worked Grad Nights a few times at MK & teenagers would try & stand up on tea cups or put their legs out on top of the cups. I had to immediately turn off ride for safety reasons. If you do this you will ruin other people’s WDW experience. People follow the safety rules on an attraction! Stealing a prop is not worth it!
5- Guests who call Magic Kingdom “Disney World”. I would try to help guests with their travel plans to different parks, but it was confusing when they called Magic Kingdom “Disney World”. All four parks and the water parks and the resorts are all Disney World. Help me, help you.
6- Guests who get bitter when you regulate the lines between the regular line & Fast Pass. I had to stop the Fast Pass line to let the regular line through & I had a guest order her 8 yr old to PEE in the line!!!! I had to call a Custodian to put kitty litter on it & clean the “toxic spill”, which is what Disney calls any bodily fluids. That was the most gross thing I witnessed at WDW and totally not worth waiting a few extra minutes.
7- Guests who don’t listen to the Parade Control Cast Members. I worked Parade Control a few times & couldn’t believe how people don’t listen! After telling the same guest 5 times not to stand somewhere it gets challenging. It is for your safety people. Back it up and listen to the Cast Members.
8- When guests ask when the 3pm Parade is at MK. This one explains itself. It’s a joke now, but many people take it really seriously. It’s just irritating, it isn’t really that bad.
9-Guests who try & push their strollers in ride waiting lines. I got yelled at & dirty looks MANY times from telling guests they could not take their strollers in the ride line. If everyone brought their stroller in line it would be 10 miles long. We had a job just for organizing the strollers outside of attractions, which is why when you come back from riding a ride you can’t find your stroller. So make sure you mark it with something other than your name to be able to find it easier.

10- Adult guests trying to get in park in costumes Long before the “Tinkerbell incident” guests have been trying to get into the Parks in costumes. People are disappointed, but it would confuse little kids & it is also a safety issue so creepy people don’t try & lure kids alone to kidnap. We’re trying to keep you all safe.

My name is Kate & I used to be a Disney Intern at WDW for two semesters. Disney Diva has asked me to write a guest blog for her readers on an insiders view of WDW. You can find my personal blog at: http://yohoyohobloggerslifeforme.blogspot.com/ I write everything from cast member experiences, Disney College Program Info & reviews on places to go @ WDW & much much more!
Share this...