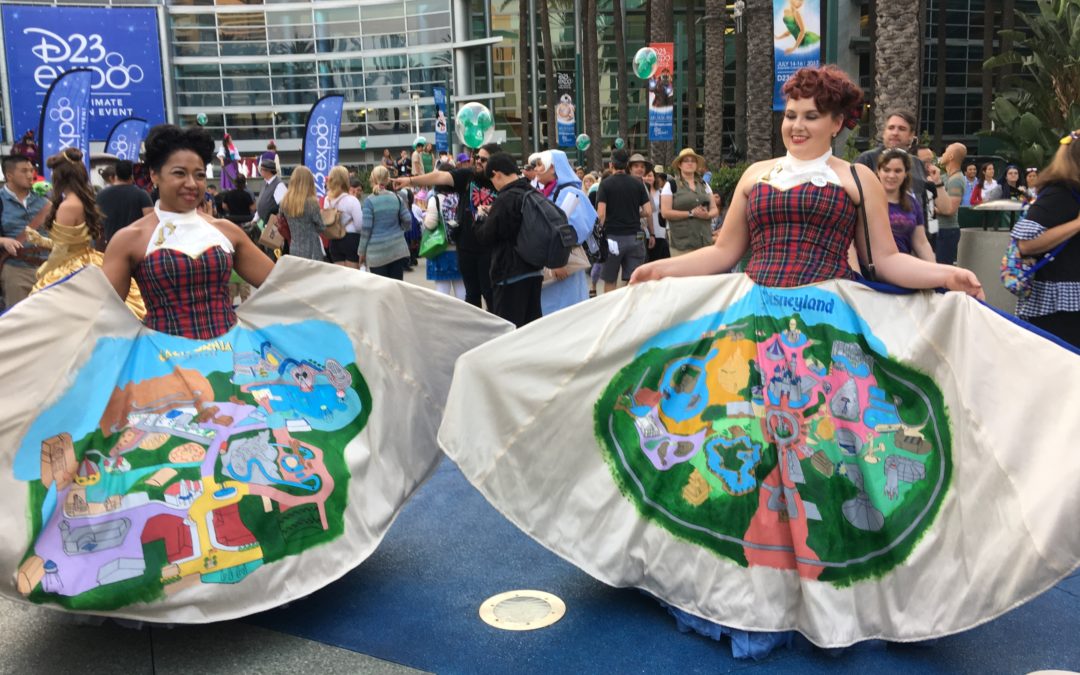 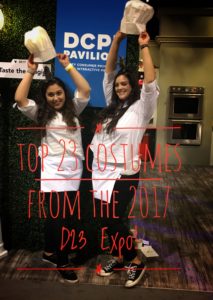 The 2017 D23 Expo was filled with fun and magic! Over the three days I ran across several people in costume representing anything from a Disney character to a Disney Parks Dole Whip. With so many people showing off their creativity, I decided to compile a list of my favorite 23 costumes that I saw over the weekend. Take a gander and see for yourself the magic of dressing up Disney! 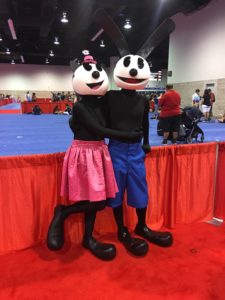 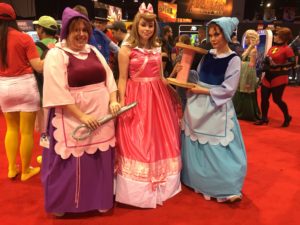 22. Cinderella / Perla / Mary: “Cinderelly, Cinderelly” is wearing the wonderful pink dress designed and made by the female mice Perla and Mary for the ball. Just adorable! 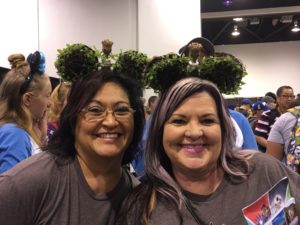 20. Baby Groot Ears: Look closely at these homemade Groot ears inspired by Guardians of the Galaxy.  They made me want to shout, “I AM GROOT!” 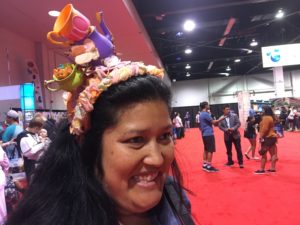 19. Tea Party / Cinderella Ears: Combining the tea party from Alice in Wonderland with Gus Gus, one of the mice from Cinderella, these specially made ears are just darling! One of a kind! 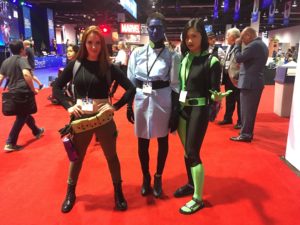 18. Kim Possible / Dr. Drakken / Shego: This action-packed group brought be back to my childhood days of watching my favorite teenager fight crime in the Kim Possible series. Rumor has it that ideas are floating around to make a live action Kim Possible movie – here’s to hoping they can bring this early 2000’s cartoon to life on the big screen! 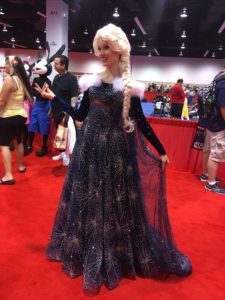 17. Winter Elsa: Covered in sparkles, this Elsa costume was a sight to see in person. Such a beauty! 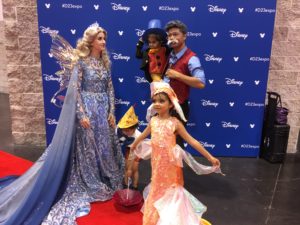 16. Pinocchio Family: Pinocchio, Jiminy, Geppetto, the Blue Fairy, and even Cleo the fish are represented in this costumed family affair. The amazing attention to detail was spectacular to take in – a real work of magic! 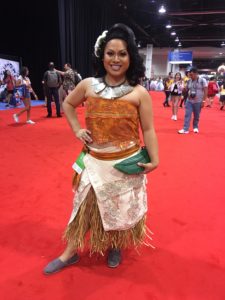 15. Moana: I was floored by the regal-ness of this Moana costume. From the flower in her flowing hair to the designer “leaf” clutch, this was a great representation of one of the newest princesses! Her skirt even sparkled! 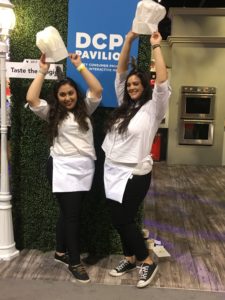 14. Chef Linguine and Remy: These 2 chefs were so adorable, they even had mini Remys inside their hats! 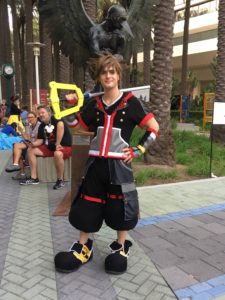 13. Sora from Kingdom Hearts: With the news that there will be an all new Toy Story Land in the next Kingdom Hearts game, it was only fitting to see a Sora costume here at the D23 Expo. “That’s the Power of the Keyblade!” 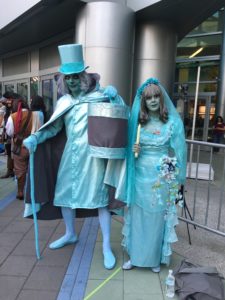 12. Hatbox Ghost and Black Widow Bride: This couple representing these famed Haunted Mansion characters were so “life-like”, you know for ghosts! The Bride even had a light up heart! 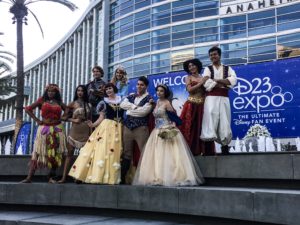 11. Disney Royalty: This group of cosplayers did a great job representing Disney royalty. Fashion stylist and costume designer Amber Arden is dressed as the Snow White at the right of the picture, just beautiful! 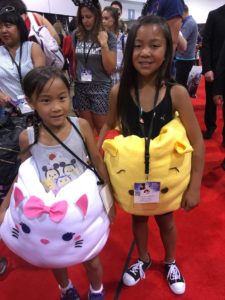 10. Tsum Tsums: These adorable costumers represented the ever so popular Disney Tsum Tsums. One of a kind! 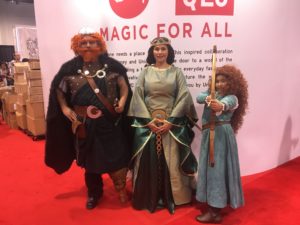 9. Brave Family: How cute is this trio of Brave inspired costumes? King Fergus even had a wooden leg! 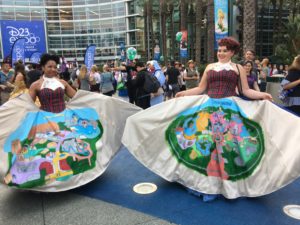 8. Plaid Park Maps: Combining the attire of a Cast Member in plaid and the details of park maps, these girls brought the magic of Disneyland and California Adventure to life! Their skirts opened up to reveal a one of a kind map of the parks that made everyone stop and stare in awe. 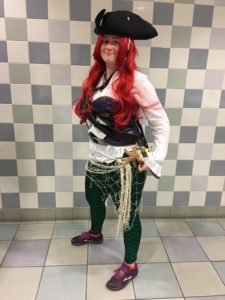 7. Pirate Ariel: This costumer took my favorite “Under the Sea” princess and added some pirate style! Her dangle on her hat was even a dinglehopper! Props to her for that attention to detail. 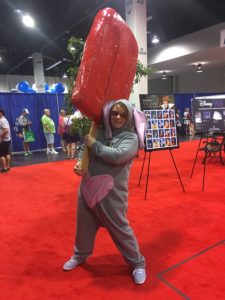 6. Finnick and the Jumbo Pop: I think we all remember the scene from Zootopia where Finnick the Fennec Fox (dressed as a baby elephant) and Nick Wilde hustle a shop owner for a free Jumbo Pawpsicle. This dedicated fan brings that fun scene to the D23 Expo and makes that Jumbo Pop look delicious! 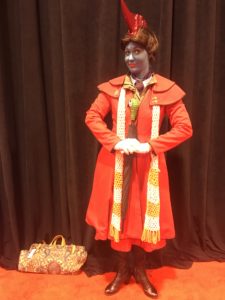 5. Mary Poppins / Yondu Crossover: After the successful release of Guardians of the Galaxy 2 this year, it was only fitting that I came across a costume crossover of Mary Poppins and Yondu – “I’m Mary Poppins y’all!” 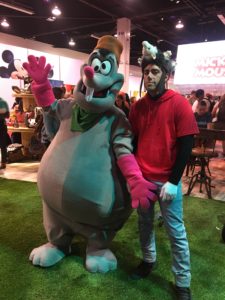 4. Max and Lester the Possum: This retro costume duo from the Goofy Movie made me want to shout, “Who’s your favorite possum?!” Famed Youtube Star and Disney enthiast Leo Camacho (on the right) was rocking it! 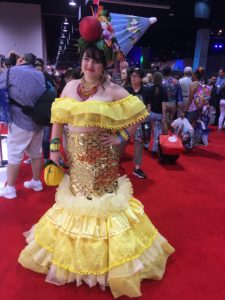 3. Disney Parks Dole Whip: I could spot this woman’s costume a mile away from those sparkles and that little umbrella on her head. It wasn’t hard to figure out that she was representing one of my favorite Disney Parks snacks, the Dole Whip!

2. Lion King VHS Tape: Wowza this costume was so fun! Dressing as a giant VHS tape of the Lion King brought back so many fond memories of my childhood. The attention to detail from the synopsis on the back cover to an actual VHS inside the case – this definitely made it in my Top 3 costumes from the D23 Expo!

Well that was my list of my favorite costumes from the D23 Expo 2017! Did you see any that I should have mentioned? Post them in the comments!