As we spend today thinking about that special someone in our lives, I know many people are either spending the day at Disney or wanting to spend the day at Disney. Are you already starting to think about next year? Or maybe just need a romantic date idea for any day of the year? Hopefully the following ideas will help.

Young Love Date Ideas
Whether you are young or your relationship is young and you are still trying to get to know each other, here are some cheaper, low pressure ideas that are more fun than over the top romantic. 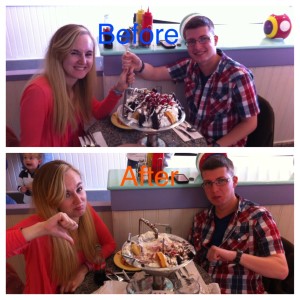 1. The 50’s style date – One of my favorite dates that Undercover boyfriend and I went on was our 50’s style date that we went on for Valentine’s Day last year. We started out the day at Beaches and Cream, and the two of us were crazy enough to try and tackle a Kitchen Sink by ourselves. That part I don’t recommend, but I do recommend the restaurant itself, and it has quickly become one of my favorite places to get ice cream on property. After that we headed over to Fantasia Mini Golf for a few rounds. It was a simple date, but it was lots of fun and very memorable.
2. The fireworks date – While I’ve never done this as a date, I have done it with friends, and it’s a classic favorite. Head to the Polynesian Resort across the water from the Magic Kingdom. I would recommend getting there early to stake out a spot. Lots of nights they will be making s’mores on the beach and you could always head up to Pineapple Lanai and get a Dole Whip. Grab yourself a beach chair and a snack and get to know each other while you wait for the fireworks to start.
3. The Dinner and a Movie – While this is a stereotypical date idea, Disney does it with a little extra flair. The AMC in Disney Springs has a Dine In theater which is an awesome experience. The food varies from hamburgers to pasta and pizza; basically something for everyone.
Romantic Date Nights
If you are celebrating an anniversary, or maybe have a little more money to spend on a romantic date night, these are some great ideas for you. 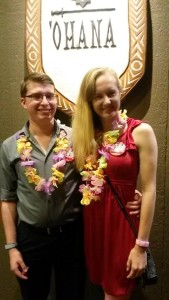 1. Ohana – This is one of my most recommended restaurants. I love the all-you-can-eat character breakfast in the morning, and I recently got to enjoy the all-you-can-eat dinner at night. There was a gentleman walking around singing traditional Hawaiian songs and playing the ukulele, and at one point he called up everyone celebrating an anniversary and sang a beautiful version of Over the Rainbow as the couples danced. And our reservation was timed perfectly because while we were eating we watched the fireworks as the played the soundtrack.
2. Picnic – One date Undercover Boyfriend and I have been wanting to do is to pack up a picnic, grab a blanket and head to Yacht and Beach. We figured the beach there is the perfect place to enjoy each other’s company and it’s usually not very crowded during the day while everyone is in the parks. There are plenty of restaurants you could stop at to get food along the way, or if you are a local you could bring your own. There are even bike rentals so you could drive around the resorts before or after.
3. Dessert – I was never a big fireworks girl before Disney, but Disney knows how to do fireworks right! If you want to watch the fireworks, but not watch them with 50,000 of your closest friends, I recommend getting reservations for the Wishes Fireworks Dessert Party or the Fairytale Wishes Dessert Cruise. Both offer yummy sweets as you watch the fireworks in a more quaint and romantic setting. If you chose to go on the Cruise you are also able to watch fireworks on a Halloween or Christmas Party night without needing park admission, which seems like an extra bonus to me! While I have never done either of these two myself, I’ve heard nothing but good reviews from people raving about their experiences! It makes me want to go very bad! Just keep in mind these reservations run out quickly due to limited space.
Proposal Ideas

1. The Classic – Everyone loves a good proposal in from of Cinderella Castle. Not only is it a great back drop, but there are always Photopass Cast Members around to help capture the special moment. And if you want something special but not so “classic”, another good spot is in front of the Mickey floral at the front of Magic Kingdom. You are also less likely to have people in the background of your photos. Of course, if you and your loved one are more partial to any of the other parks, all of the classic photos make great proposal back drops and nice surprises.
2. The Adventure – One very popular proposal idea is a scavenger hunt, these are perfect because you can personalize them to you and your favorite rides or parks. The cast members love to help out with these as well, and feel free to ask if they have any ideas on how to make it over the top. I’ve seen people who had parade performers help, or who have proposed in Princess Fairytale Hall in front of Cinderella’s slipper. This idea could be done over and over again yet never done the same way twice, that is what I love about this one.
3. The Spectacular – Wishes Diva gives us a very special proposal idea, her own!

“The parks at Disney World can be the most magical place on Earth. They can also be one of the most romantic places on earth. I was lucky enough to experience that during the summer of 2013.

As a college graduation present for myself, I planned a week long trip to Walt Disney World for myself and my boyfriend at the time. I was so excited because it had been quite a few years since I was able to go back to my second home.

We had planned everything out for the week and were also going to meet up with my best friend who was working down at Epcot at the time. My boyfriend and I had been dating for quite some time, and I had a small inkling that he was planning something special for me. 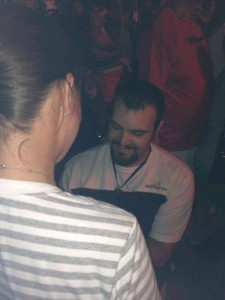 On the third day of our trip we finally visited Magic Kingdom. We did all of the attractions and shows that we had on our list during the day. That evening we had plans to watch the Wishes fireworks show. Typically we visit attractions up until around 15 minutes before Celebrate the Magic starts. We aren’t the type to scope out our seats way ahead of time. But that night my boyfriend insisted on finding a spot earlier than usual. He lead us around the hub and found what he thought was the perfect spot for viewing.

As we were waiting, my best friend was supposed to be getting off work and meeting us for the fireworks show. My boyfriend sent me to the train station to wait for her to get there. (I later found out that while I was waiting was when he dug out the ring from the bottom of the backpack we had been carrying all week, and my best friend went to Guest Services to get us our ‘Just Engaged’ buttons.)

After I met with my friend we both headed back to wait for the fireworks to start. We were standing to the right side of the hub, directly underneath where Tinkerbell flies over during the show. During the finale of the show, my boyfriend got down on one knee and asked for me to make his wishes come true by marrying him. Of course I could not resist after that proposal! 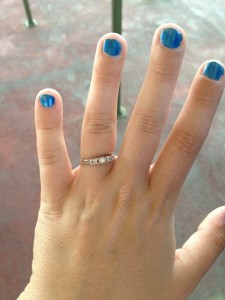 Looking back, I would not have wanted anything different for our engagement. We happily wore our ‘Just Engaged’ buttons until 3am that night (thank you Extra Magic Hours) in Magic Kingdom and for the remaining days during our visit.

This is the reason why my diva name is Wishes Diva!

So to all the gentlemen reading this post: Take this whole post as your tip, and make your girl’s dreams come true!”

What are some other romantic Disney ideas you or a loved one has done? Feel free to leave them in the comments below!