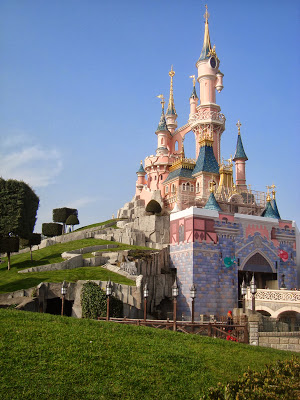 Two years ago, my wife and I took our first big trip to Europe, specifically London and Paris. We planned  every detail, trying to hit every museum, monument and palace we could in a week. But as the trip got closer, a crazy idea popped into my head; Disneyland Paris is right THERE. I hadn’t really considered it before, but what self respecting Disney fan could possibly pass up an opportunity to see another park outside the US? So we set aside an extra day to visit Mickey Mouse in the land of baguettes and cigarettes.

We bought our park tickets online before we left for the trip. I recommend this, as there are many sites with discounts, and less time spent waiting at the box office, the better. If you are staying in Paris, Disneyland is a short 45-minute train ride to the suburb it resides in, and is a perfect day trip from the city. Getting around Paris is a breeze with their comprehensive subway system, but note that the train out to Disneyland is a different train line (the RER A) that runs to the suburbs. Though, if you have a multiday subway pass, it will work for that train line too. You will want to exit at the Marne-la-Vallée — Chessy station. From here, it is a very short walk to the park, which you cannot miss from the station with the all clearly marked signs. 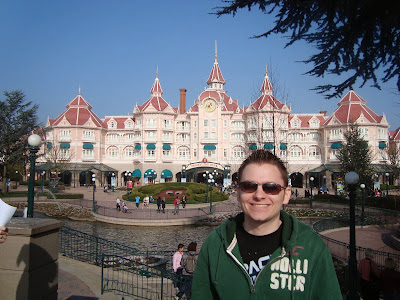 The Disneyland Paris Resort actually features a second park, Disney Studios, and a Downtown Disney area. The set-up is similar to Disneyland, with the 2 parks facing each other, and Downtown Disney nearby. The first thing you will notice is that DLP doesn’t have a train station at the front entrance, but rather a hotel that gives its patrons priority access to the park.  Once inside, the park feels very close to The Magic Kingdom in Orlando, but slightly newer and more ornate, due to being built in 1992.  But in contrast to that, you will also find it is not as well kept up, with paint missing, lights burnt out and a noticeably amount of trash on the ground. While riding it’s a small world, we saw a bumper sticker that had been slapped onto a façade inside the attraction, and thought Walt must be spinning in his cryogenic chamber.  Those kinds of shenanigans would never fly in Orlando or California. That said, it is still nicer and cleaner than most places in the “real” world, but for a Disney park it was a noticeable problem. 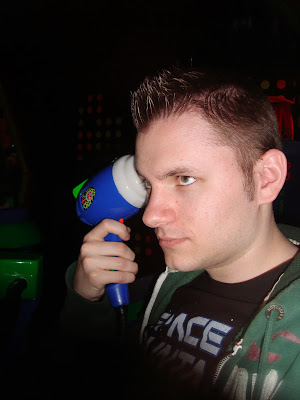 Another thing to take note of is the cast members. Simply put, they’re not very good. Lines seemed to take twice as long as they should have due to the fact that they weren’t directing guests properly, or even paying attention to people out-right cutting in line. There was point on it’s a small world when we had to let ourselves onto the ride boat, as no one was directing traffic at all. Boats would just keep going regardless of if people were aboard or not. At Buzz Lightyear Laser Blasters, the FastPass line took twice as long as stand-by, as no one was there to switch the gate flow, and the regular line continued to pour in for 30 straight minutes. That said, a below average Disney cast member is still probably better than the average teenagers working your local Six Flags, so don’t let that effect your decision to visit, just be warned. 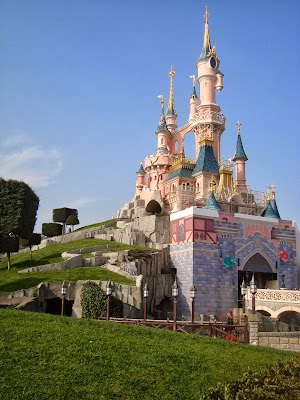 Despite some trash on the ground and a handful of apathetic workers, the park is really well designed with some pretty great attractions. We spend the whole day there from open to close and tried to hit every attraction we could. I’ll run through some of the most notable ones. 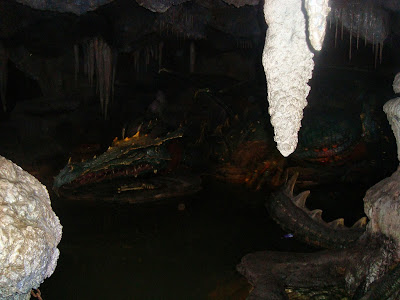 The castle is amazing. It was made to look more fantasy-like, in order to separate it from the many real castles throughout Europe. It features an auto-animatronic dragon beneath it, so be sure to take the steps below.

Tomorrowland is known as Discoveryland, and has a Jules Verne, 19th century retro-futuristic feel. Their Space Mountain is closer to the Rock ’n Rollercoaster with loops and barrel rolls. It was one of the most intense Disney rides I’ve ever been on, so be warned. 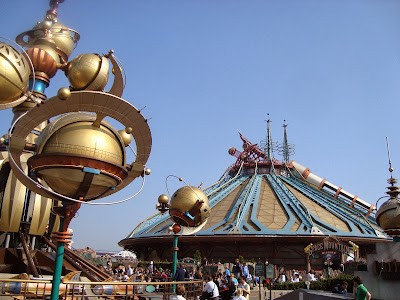 Their Fantasyland is huge (in caparison to the pre-New Fantasyland expansion in Orlando), and features many great architectural flourishes, impressive water features and terrifically themed foliage. I found their Peter Pan’s Flight, while mostly a copy of the US version, had a ton of great little touches that made it feel newer and more impressive. Sadly, the Alice in Wonderland hedge maze, an attraction my wife was greatly looking forward to, was closer for refurbishment, but looked promising from the outside. 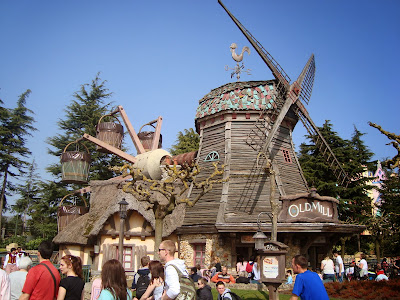 Over in Frontierland, their Big Th 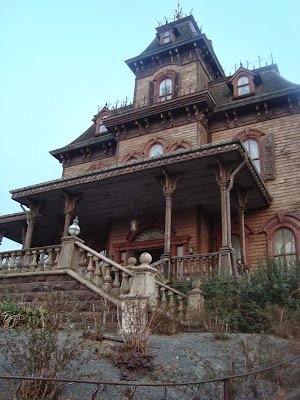 under Mountain Railroad is actually on a small island, and the train cars travel through a cave under the water. It was my favorite Big Thunder of all the parks I have visited.  Also, you will find Phantom Manor, DLP’s version of the Haunted Mansion. The attraction is American Old-West themed, and pretty much an entirely separate attraction to its American counterparts. Your doom buggy makes it’s way around the decrepit mansion similar to California, until it travels below the dirt and into a zombie filled Old West town and becomes an entirely different attraction. Definitely make it high on your priority list.

Finally, the main draws of Adventureland are Pirates of the Caribbean and an Indiana Jones roller coast. Pirates was also down for refurb, which was a shame because we heard it was one of the best versions around the world. I opted out of the Indy roller coaster as I was still reeling from the beating I got from Space Mountain. 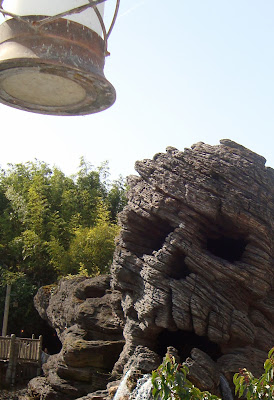 The dining in DLP is comparable to the Magic Kingdom. We had heard good things about Walt’s, an up-scale sit-down location off Main Street, but opted to do counter-service for lunch and dinner due to the hectic schedule.  For lunch we ate at Hakuna Matata in Adventureland, which featured wraps, burgers and even Indian dishes like Chicken Tikka, which we both had and enjoyed. It’s interesting to see the items that they consider fast food fare in a European park, and it offers some unique options. For dinner we dined at Casey’s Corner, where I had the standard terrible theme park pizza (I knew my mistake going in, but I did it anyway), and my wife had a foot-long hot dog that to her surprise was covered in nacho cheese. She disgustingly described the hot dog texture as “melt in your mouth”. So, dining was a mixed bag.  Beware of what the European versions of a classic US dish might be, but if you’re adventurous, roll the edible dices. 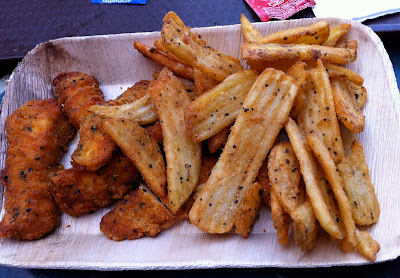 If the language barrier is a concern, don’t worry because a majority of the signage is in both French and English. One actually great thing about the cast members is that they are all bilingual. I even saw a cast member taking orders at a counter-service location speak 4 different languages to 4 different customers. It made me feel quite dumb for all the high school Spanish I’ve already forgotten.  One other thing to know, and this goes for Paris in general, is that everyone smokes. I think I even saw Mickey take a long drag off a cigarette before meeting and greeting with the kiddies. It’s just something that will stand out to you while inside a Disney Park, and if you’re adverse to smoke, good luck.

We didn’t make it over to The Walt Disney Studios Park, due to a lack of time. We did take a stroll through Downtown Disney, which was about the same as California’s version. We kept seeing people in giant, over-sized cowboy hats walking around everywhere and wondered what was going on. We finally discovered the “America” themed restaurant was giving them out, because I guess the world thinks we’re all cowboys.

So if you find yourself visiting Paris, or even a neighboring country, I think Disneyland Paris is worth your time. It’s a beautiful park, and while it’s not maintained as well as the US ones, it has a lot of great and unique attractions that any true Disney nerd can appreciate. It is easy to get to, and easy to navigate. 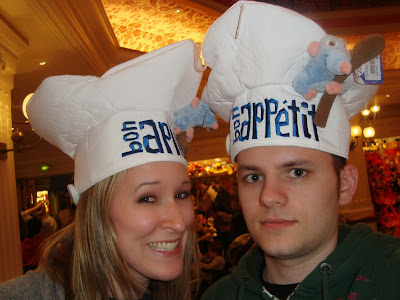 Another added personal bonus was that we realized this marked us visiting 7 of the 11 worldwide Disney parks. Now the previously crazy notion of seeing them all suddenly has become a possibility. So we might find ourselves in Japan or China some day soon, because now we have to collect them all.