Voices of Liberty at Epcot 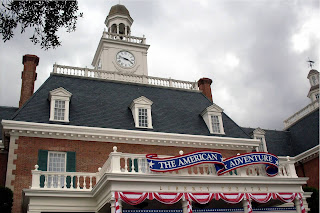 One of the most moving experiences at EPCOT can be found in the American Adventure Pavilion. The Voices of Liberty are an 8-part A Capella choir, specializing in songs from the 1700s and 1800s. The choir is made up of both men and women whose voices blend in beautiful harmony. They have been called “the United States vocal ambassadors to the world” and have performed for five American Presidents. They wear costumes representing the early days of the thirteen colonies through the time of the Civil War.

When they enter the rotunda for the first song, the choir director requests that everyone move closer to the center of the room. The acoustics are absolutely amazing! The director introduces each song as well as giving a brief history lesson about where the song came from and why it’s important. Then they begin to sing and the music reaches a crescendo- honestly, it gives me chills.

The program of songs changes with the seasons. Most of the year, they sing American patriotic songs. At Christmas, they sing traditional Christmas Carols. One of my favorite songs performed by Voices of Liberty is the Battle Hymn of the Republic. It’s enough to make you cry, it’s so beautiful. Other favorite songs include the Americana favorites: This Land is Your Land, America the Beautiful, and Ol’ Man River. You can also hear Disney favorites such as Golden Dream and When You Wish Upon a Star, as well as classics like Amazing Grace. There is a CD available from Amazon and other retailers featuring a selection of their songs. It is called “A Capella Americana” by the Liberty Voices.

The Voices of Liberty perform several times a day, for approximately 15 minutes, before each showing of the American Adventure. They are definitely worth adding to your “must see list” at EPCOT.