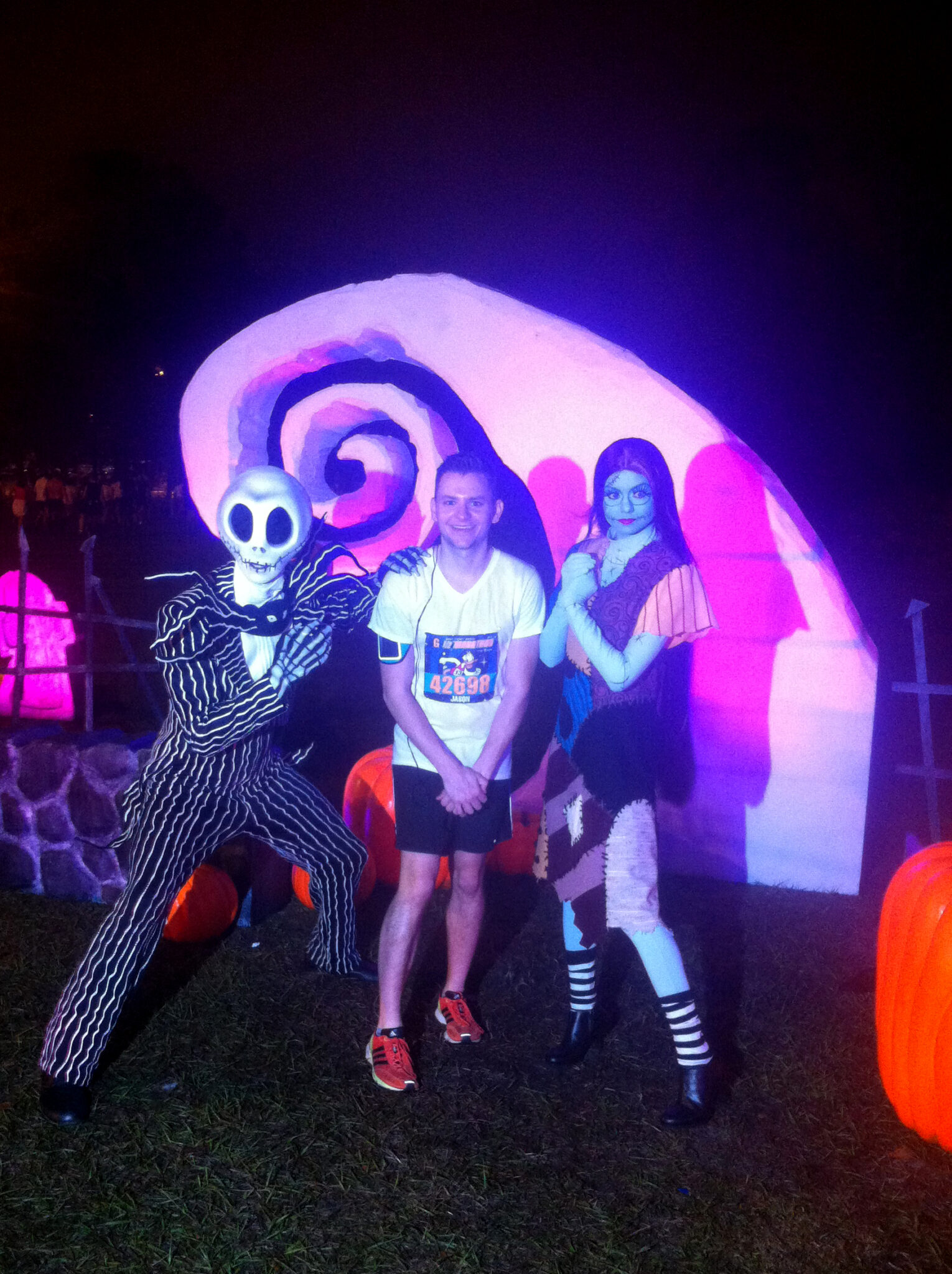 Walt Disney World’s Marathon Weekend is held every year in mid January, and usually spans the second week after New Year’s Eve. In the past, the event encompassed 3 races and a runner’s expo. But for 2014, a fourth race was added.  This year, my wife and I participated in 2 of the races for the very first time, and we both agreed it was one of the best experiences of our lives. 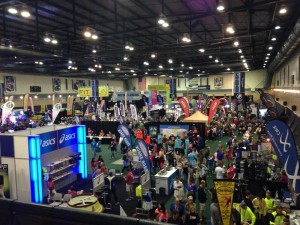 Marathon weekend kicks off on Wednesday, when the runner’s expo opens. Held at ESPN’s Wide World of Sport complex, the expo features informational talks by guest speakers, runner’s packet pick-up, and tons of merchandise from runDisney and outside vendors. The expo remains open until Saturday, the day before the final race. Buses run from all the Disney resorts to the expo, but be careful to find the expo bus and not the bus that simply travels of the Wide World of Sports complex. The Wide World of Sports complex bus will make many stops and cost you lots of time. This was actually fairly confusing for us, so make sure to ask. Once you arrive,  the packet pick-up and shirt pick-up ( things that typically happen at the same time) are actually held in two different buildings. This is also very confusing.  Again, make sure to ask, as you don’t want to waste valuable time and valuable steps when you could be resting up for the big day. Disney provides no shortage of official merchandise designed specifically for each individual race or the whole weekend, and there are rows and rows of athletic vendor booths to explore.  Be sure to give yourself several hours for travel to and from the expo and time to take in the sights (even more time if you want to hear any of the presentations).

The events themselves consist of four races; the 5 K Family Fun Run, the 10 K (2014 was the first year for the event), the Half Marathon and the Full Marathon. Runners can also participate in the Goofy Challenge; running both the half and full marathon, or the Dopey Challenge (2014 was the inaugural year as well); running all four races in four days. While that may seem crazy to some, I’d say about half the runners in each race were also participating in either the Goofy or Dopey races. There are also Pasta in the Park parties the nights before races, and a cool-down party on Sunday night. 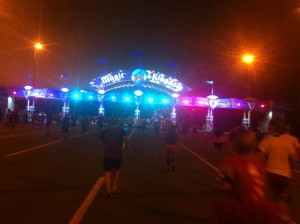 I had been a runner for a number of years and always dreamed of one day running through a Disney park. Last year, my wife went from being a non-runner to completing her first 5 K within 4 months of first lacing up her running shoes.  I decided to do the half marathon and my wife decided to graduate to the 10 K. We spent a couple days in the parks before our races, but be careful not to be on your feet too long (advice we didn’t exactly follow). 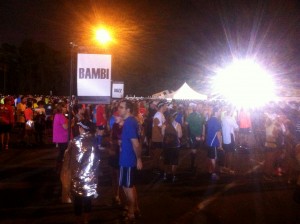 The inaugural Walt Disney World 10 K was held on Friday morning at 5:30 am. We awoke at 3 am to board the bus by 3:30. We fortunately stayed close by and were at the Epcot parking lot before 4 am. There, nearly eight thousand runners stretched and snacked until it was time to enter their corrals. Announcers, with a little too much pep for 4 am, tried their best to keep the spectators entertained on the dark, January morning. 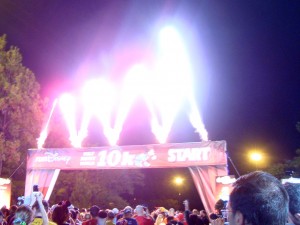 At 5:30, fireworks exploded, and the first of the corrals was released. Note that depending on your corral placement, it could be up to an hour before you run, as 5 to 10 minutes passes between corrals. 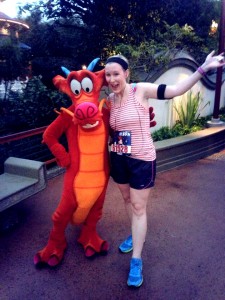 10K runners first traveled through the road in front of Epcot, before entering World Showcase, followed by a trip around the Boardwalk hotels, back through Epcot and the finish line in the parking lot.  Along the way, Disney characters are there to pose for pictures and typically are of the more rare variety than those generally seen in the parks. After crossing the finish line, you are presented your metal, and can find sports drinks and boxes of refueling food. 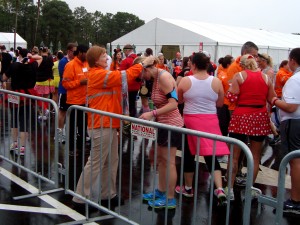 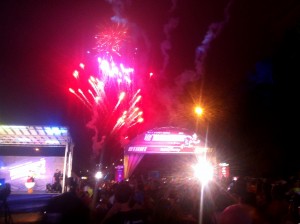 The next morning, we were up again at 3 am for the half marathon. This time, there was very little time idly waiting for the race to start, as the start line was a 10-minute walk from the runner drop off point. Also, there are considerably more corrals to get through (30 thousand participants), but the time between corrals was actually shorter than the 10 K. I was in corral G and I crossed the start line before 6 am. 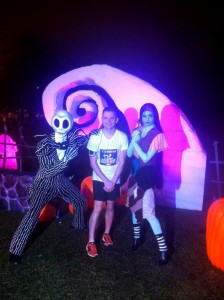 The half marathon travels down the road between parks, enters the Magic Kingdom and right through Cinderella Castle, winds by the Polynesian and Grand Floridian resorts, enters Epcot’s Future World, and finishes again in the Epcot parking lot. Spectators can enter the Magic Kingdom to view their runners go down Main Street, and make it back to Epcot before they cross the finish line. I actually recommend carrying a smart phone to both take photos, and keep your family up to date of when you will pass by where for that perfect picture opportunity. I didn’t participate in the full marathon, but the course travels to all four parks over 26.2 miles. 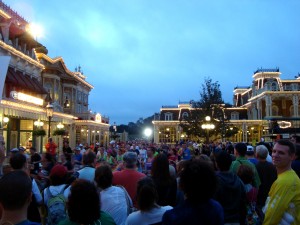 We can’t recommend the Walt Disney World races enough. Being able to run through the Castle or beneath Spaceship Earth is such an incredible experience for any runner/ Disney fan. We all are pretty familiar with the parks, but this experience affords a different view of them, and one that can only be shared with your fellow runners. And if you are a fan of Disney characters (we’re avid rare character hunters), so many unique characters are along the paths to take your mind off the run. You might need to wait in a short line to take most photos, but really a race at Walt Disney World is so much more than about setting a new personal record. 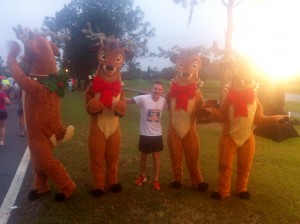 My wife was a little nervous about running her first 10 K, but immediately after it was over, she said, “I’m pretty sure we’re going to have to do this again next year”. And it’s true; it will be hard to run a race anywhere but Disney again because there is nothing like it.

Leading up to the race and even more so afterward, there is also an overwhelming sense of positivity among the runners and their supporters. Everyone wears their metals to the parks all weekend, and congratulate each other. The Monday after I returned back to the “real world,” I ran into a stranger at our local grocery store wearing his marathon t-shirt. I happened to also be wearing mine and we struck up a conversation about how terrific the event was. The event truly breeds a new sense of community. 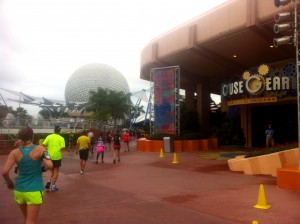 I recommend the event to all runners or anyone even thinking about running. The atmosphere, amazing location and frequent photo stops make the races much more manageable than most races, even to first timers. And don’t worry; many runners who took off like a rocket out of the gate were walking by mile 3, so there is no shame in taking a breather. My wife wasn’t sure she could complete the 10 K, but afterward said she thinks she could probably do a half marathon here (mainly just to see more characters than she got to on the 10 K!). January in Florida is a great time to run a race. Temperatures are usually in the 70’s, perfect for running (although this year the crazy cold even effected the sunshine state, dropping one night early in the week down to 39 degrees). The parks are less crowded than the standard vacation season, and give you an opportunity to experience the parks at a slower, more relaxed pace. Race registration usually opens up in the early spring for the following January’s race and fills up fairly quickly. So if you’ve ever considered it, jump in with both feet, laced up in your brightly colored running shoes and experience an event like nothing else. 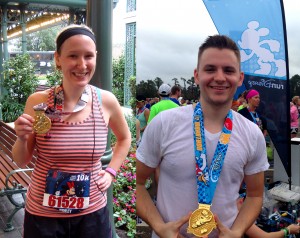