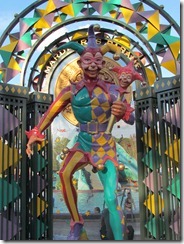 While running the Princess Half Marathon in February, Port Orleans French Quarter had been designated as a “race resort”. This essentially means that they provide extra buses to take you and your family members to and from the races, as well as to packet-pick up and the Expo.

My husband and I stayed at Port Orleans – Riverside for two nights when we ran the Expedition Everest run and liked it a lot. So we decided to check out French Quarter this time around to see how the two compare.

The two Port Orleans resorts are close to one another. Actually they are right next door, but they’re not easily traveled between. Its quite a hike between the resorts. And most of the time the two resorts do not share a bus to and from the parks. 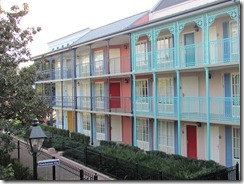 Our travel agent called us about two months before we left telling us that Disney was running a small special that day and that if we wanted she could move us to a Premium room from our Standard room and it would cost $8.00 LESS. We were super excited about this because Premium rooms look the same as Standard rooms, BUT they are closer to everything. They’re closer to the bus stops, cafeteria, pool,..everything! So if you’re considering it I would opt for the upgrade. Port Orleans French Quarter is considered a moderate resort.

The rooms have two double queen-size beds and a full bathroom. 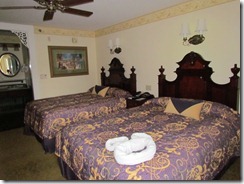 I thought the shower and tub were nice and big enough to be tolerable to soak in after a long day. 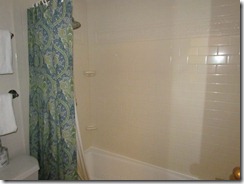 I really liked the privacy curtain in the bathroom. This allowed people to get ready apart from one another as well as shutting out light when others were sleeping or napping and you were awake. 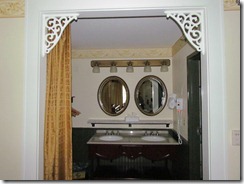 There was a small sitting area and a large chest of drawers to put clothes on along with a flat-screen television. There are only really three deep drawers, the large door opens to a mini refrigerator. Which is nice if you want to get some provisions. 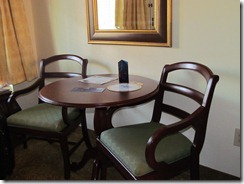 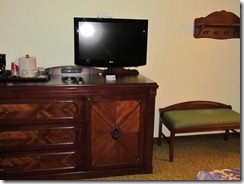 And of course the room comes complete with a Mickey Touch from the housekeeping staff!

The beds were extremely comfortable and the four of us could move around quite comfortably in the room.

They will clean your room every day. It is up to you whether you want to tip for not. The room also has a safe with a lock-key in it, should you want to lock up some valuables.

Like everything at Disney resorts, the theming is strong. The Mardi Gras theme associated with New Orleans permeates every detail. These ‘gator figurines lead you down the path to the pool and are “fixtures” (pardon the pun) throughout the recreation areas. 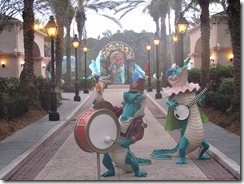 Standing across the brick walkway from one another when you first start towards the pool are the hot tub and the playground. Please note that they ask for children to be supervised at all times, but I rarely saw a parent with any of the older kids.
The playground has a few slides and turf-style grass for children to play around in and burn off a little energy. 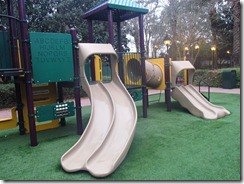 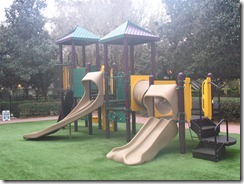 Across the way you will find a hot tub

which is normally heavily occupied by adults needing to rest their tired bones from all the walking. 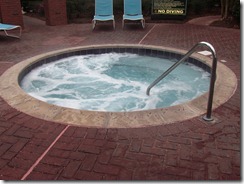 It was a good idea to put it away from the main pool area because of all of the sound.

The hot tub does not have a lifeguard, but the swimming pool has MANY of them (during the day, all bets seem to be off after a certain point at night) .

As you follow the dancing Alligators down the walkway towards the pool, you will pass “Mardi Grogs”, a cool poolside bar so while the kids “kick 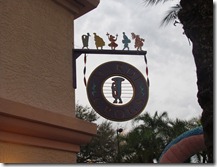 back”, so can the parents.

And then you are upon what many call the BEST pool on property. It certainly has some serious theming going on. Can you look at the pictures and discover what it is? 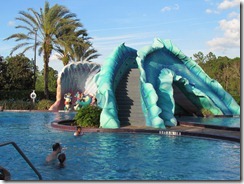 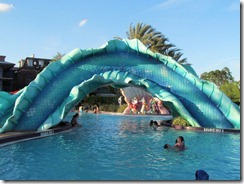 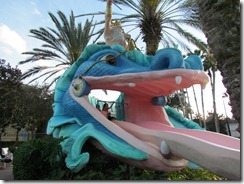 If you guessed sea-serpent you are right! And King Triton himself sits perched on this “monstrosity”.
My children tell me that it is “super fun” to ride down the serpents tongue and plop into the pool. Be warned though, this pool is NOT HEATED. Don’t let your kids trick you, its is freezing cold in the winter time.

There is also a baby pool area that will allow your littler ones to splash around.

They had some great entertainment going on while we were poolside. They had trivia games for families to compete in, freeze dance competitions and more. You will certainly be entertained while you are are the pool even if you don’t feel like hopping in for a swim. 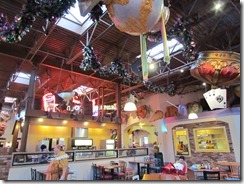 Port Orleans French Quarter does not have an actual “sit-down” restaurant in it, but Port Orleans Riverside (a short walk or boat ride away) has one named Boatwrights.
French Quarter does, however, have a huge cafeteria they call Sassagoula Floatworks with many different food choices to pick from, including real Cajun food like gumbo and jambalya, and beignets that would rival those in New Orleans. I had a muffaletta that deserves a post of its own!

This is where you will come to refill your resort mugs with soda, coffee or water, or pick up a sweet snack or grab breakfast or an entire meal. 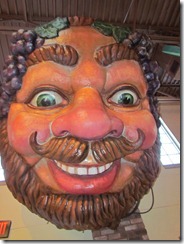 Warning it does have some giant creepy masks hanging from the ceiling which I couldn’t quite figure out. 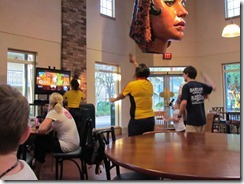 a lot of fun (if you had a clue what you were doing)!

Scat Cat’s Club (an homage to Aristocats), is a jazz bar located fairly close to the cafeteria and the front doors. They have live music most nights, but I wasn’t able to visit this trip.
The resort also features a laundry room, arcade, and large shopping area.

Advantages: It is one of the smaller moderate resorts and only occasionally shares a park bus with Port Orleans Riverside. This means more space for you when you are on the bus and fewer people riding with you. It has one bus stop while Port Orleans Riverside has three if that’s any indication of the difference in size. It is pretty and I thought very quiet. The pool is great and the slide is the best I’ve seen at Disney World. Its moderately priced and centralized on Disney property. I felt like we got places very quickly, especially Epcot and Hollywood Studios which are, literally, less than 3 miles down the road. And the ability to hop a bus or a boat to Downtown Disney for a very short ride is great.

Disadvantages: You can hear the Epcot fireworks. Which could be irritating if you’ve got a little one sleeping. If you don’t have a premium room you will walk a long distance to the bus-stop, cafeteria, pool, and more, HOWEVER it is still much shorter than what is in most resorts on property. It can only hold 4 people per room. The pool is not heated. It is hard to get a late check-out since its smaller the turnover is faster (it seems).

Overall I would say that the advantages outweigh the disadvantages overwhelmingly to this resort. It is easily my favorite Moderate Resort at present and I’ve heard many others say the same. I really don’t think you will be disappointed! So if you get quoted a discounted room rate and are unsure about which moderate to choose, I say GO FOR PORT ORLEANS FRENCH QUARTER Just having the bus to yourself is more than worth it!

Y’all come back now, ya hear!?