Walt Disney World when you’re not a fan of rollercoasters The first time that I went to Disney World I was alone, an adult attending a Disney Institute class. I didn’t go on a single ride. Honestly, most of the traditional carnival type rides make me motion sick. At Disney, however, I found lots of things to do that didn’t trigger vertigo or motion sickness. (Tip: If you do get motion sick check out Help for What Ails YA and Tips for Combating Motion Sickness.) I enjoyed walking through EPCOT, eating at various restaurants (when you’re alone you can get a table at Victoria & Albert’s without a reservation!) and watching the fireworks.

I returned to Disney World years later with my kids, then 18 months and 9 years old. Due to the little one’s age and the older one’s disability, we took things extremely slow. I remember going on Cinderella Carousel and It’s A Small World in the Magic Kingdom. A carousel is a carousel wherever you go, so its never very crowded. Its a Small World was a slow boat ride through animatronic figures singing (you guessed it) “its a small world after all.” It’s hard to get that song out of your head for days afterward.

We watched the Dream Along with Mickey show in front of the Castle. We strolled and enjoyed the atmosphere. Mickey’s Toon Town was still there and the little one spent a long time playing in Donald’s Boat (splash pad/spray ground).

EPCOT and Hollywood Studios were much the same. At Hollywood Studios we happily watched the High School Musical parade three times in one day. We went to the Playhouse Disney show. We sat in the delightfully air conditioned theater watching Voyage of the Little Mermaid. We ate yummy food and spent too long waiting for Fantasmic! to start. 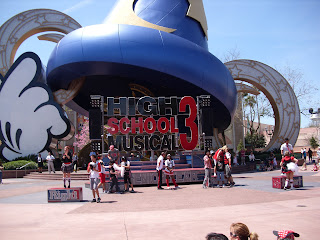 We just strolled through EPCOT. We watched every live performance from Off Kilter to Mariachi Cobre. We enjoyed the breezes off the lake in the evening while watching an aging 1960s rock group playing the America Gardens Theater. We went to Turtle Talk with Crush and the Character Spot. I remember going on Gran Fiesta ride in the Mexico Pavilion which was as gentle as Its A Small World. At the end of the night we watched Illuminations.

We didn’t even try to go to Animal Kingdom the first time we visited Walt Disney World because we were having such a nice time in the other parks. Instead,we chose to go back to EPCOT. 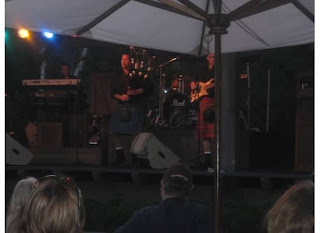 Our second trip, two years later, wasn’t much different. We added a few rides to each park, but mainly we enjoyed the shows and the atmosphere. It was returning into a beloved and relaxing vacation spot. We didn’t feel compelled to ride every ride or see every show. We enjoyed slow paced days and time in the pool.

Some of our new experience, like Mickey’s Philharmagic fireworks show, weren’t really rides at all – which is why in Disney lingo they are always referred to as “Attractions.” In Hollywood Studios we tried Toy Story Mania (a hit with us all) and the Great Hollywood Movie Ride (a flop with us all). We did enjoy the silly Muppet Vision 3D Movie – and the parades.

We finally made it to Animal Kingdom -which we found very hot and extremely crowded. It was impossible to maneuver through the crowds and we left without seeing a single show or parade. I like the idea of the naturalistic habitats and the walking trails. I’d like to go back – but only in the winter! 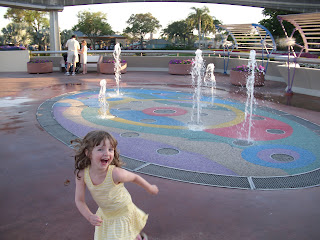 On the second trip our youngest explored every playground from the Boneyard in Animal Kingdom to Honey I Shrunk the Kids in Hollywood Studios. She found several playgrounds tucked into the corners of EPCOT – and fell in love with the spray ground, spending almost an hour running through the fountains one afternoon.

Once again, EPCOT was our favorite. The pace is leisurely. No one is rushing to get to “the” ride. People are generally a little more relaxed (possibly because they serve alcohol in the World Showcase!) The girls got to visit with Belle in France and Jasmine in Morocco. The music and food were just as good as we remembered. 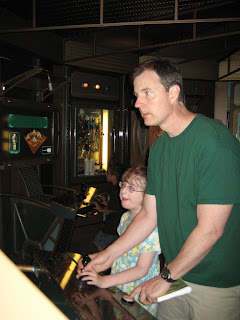 We spent more time in Future World at EPCOT on our second visit and tried a few more Attractions. We went on Spaceship Earth – which is a surprisingly slow, dark ride. We also went on the Nemo & Friends clamshell ride – another slow, story based ride. No spinning, twirling or big drops for my family! Happily, all of the Attractions contain warnings for motion sickness so we avoided Mission:Space opting instead to hang out at the end of the ride where we played video games and let the little one enjoy the indoor playground.

What I love most about our trips to Walt Disney World is that they combine the comfortable familiarity of a favorite vacation spot with opportunities for new experiences. On our next visit I’m looking forward to exploring the department store at the Japan pavilion. I never realized it was there! I want to get a pearl from the Pick A Pearl station for myself and each of the girls. I’m also excited about going to Innoventions this time around. I think our little one is old enough to really enjoy the hands on experiences.

And of course, I am looking forward to some of our family “traditions”. Simple things like watching Cinderella’s Castle change colors at night and getting a Mickey Mouse shaped kiddie cone from Plaza Ice Cream Parlour in the Magic Kingdom. I want to stroll around the World Showcase at night and admire the beautiful lighting, listening to the various musical performances.

Some day I know that our youngest will want to go on “the” rides. When that day comes, I’ll bravely watch her head off on to Tower of Tower alone – and wait for her to emerge, safe, happy and slightly scared. For now, I’m happy to enjoy Walt Disney World without the rides for the most part. 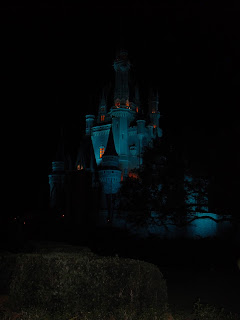