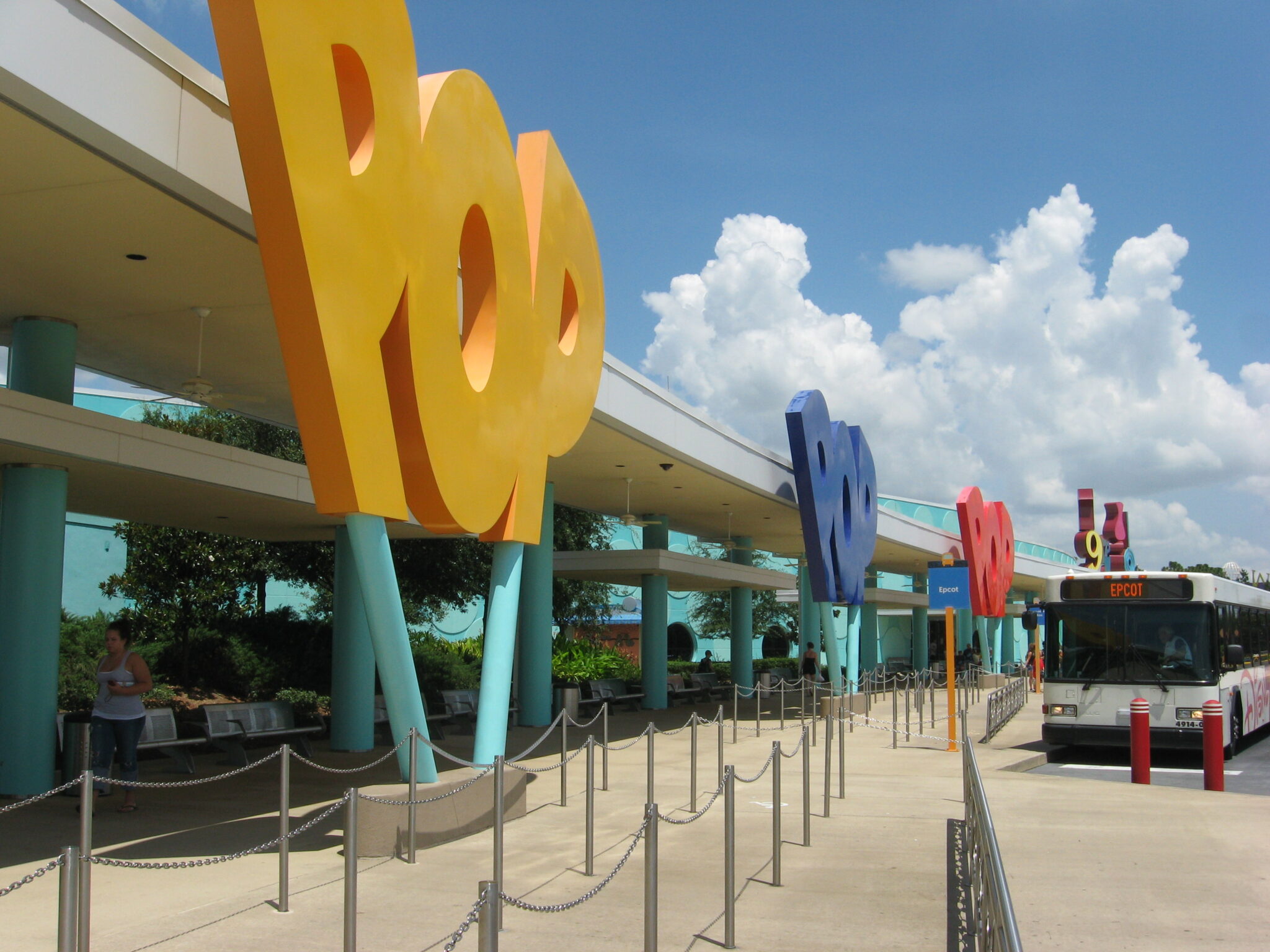 On our last two trips to Walt Disney World we stayed in Disney’s Pop Century Resort.  On trips prior to this, we have stayed at Port Orleans (usually French Quarter), and we absolutely loved it, so we were a little skeptical about the switch.  But, we were looking to save money on these trips and were also going during more peak times (Princess Half Marathon and Summer), so we decided to go with a value resort (Note:  Pop Century rooms are around $155 a night).  Before I continue, I should probably share my hotel theory.  Personally, I could sleep on an old dirty floor as long as I had a pillow.  I don’t feel the need to spend a lot of money on a place to lay my head, especially on trips like Disney where you are in your room very little.  Okay, continuing on…Our February, parents-only trip was the first time we stayed at Pop Century, and we really loved it.  In fact, we immediately started planning our next trip so we could bring our son to check out this cool resort.

Pop Century is located on the outskirts of Disney’s property and considered a Hollywood Studios resort as it is the closest park.  It is also close to the water parks and ESPN’s Wide World of Sports. 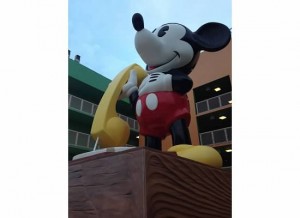 The props at the resort are HUGE and even overwhelming at times.  When you first pull in you are greeted by a huge, blasting sign announcing the arrival at the resort as well as diagonal decade signs that are appropriately decorated according to the decade they represent.  Also, right outside of the entrance, they usually have games for the kids to play.  There is a bean bag toss, hula hoops and more.  Now, the next part, is one of my favorites.  When you enter the lobby they have different toys, clothes, music, computer equipment and so much more from each decade.  When I got to the 80s/90s area, I was immediately transported to my childhood/teenage years.  When we took Bryce back, it was so much fun to show him some of the stuff we played with as a kid.  It also showed me and my husband what we missed out on in earlier decades (I would have SOOO sported those red disco boots)!  There are also footprint patterns on the floor that teach you the steps to various dances as well as hop scotch (Bryce’s favorite). 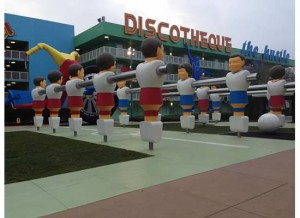 Like most of the Disney resorts, there is an arcade in the lobby area. Diva Tip:  Be sure and check your reservation booklet, because there is usually a couple for free points to be used at the arcade.

There is also a gift shop (of course!) and food court.  The food court has seven different food stations that have a wide variety of foods including pizza (they also offer in-room pizza delivery), ice cream, pasta, sandwiches, ethnic cuisine, and healthier options as well.  Even the pickiest of eaters would easily find something they would like.  The meals in the food court are considered quick serve or snack if you are on the meal plan, and, if not, the meals are $12-$15 apiece per adult. 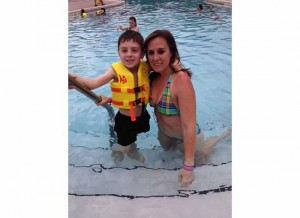 Like the buildings, each area of the resort has a separately themed swimming pool.  Believe it or not, our May trip was the first time I had ever been swimming while at Disney World.  Our pool was shaped like a bowling pin, and Bryce thought this was pretty cool.  Also, all pools have lift vests available for the kids to use.  And, most importantly, all pools are very well-guarded by the lifeguards.  I was extremely impressed with the lifeguards at our pool.  They never, ever took their eyes off the people.  Even when someone would approach them or ask them a question, they were extremely polite in their response, but never took their eyes from the pool to respond.  I was most impressed when they would swap coverage areas with another guard.  They would do a visual scan of the new area, using their finger as a guide.  They would track with their eyes and finger from one end of the pool to the other and then move down a few steps and repeat.  They did this until the entire new area had been scanned, and then they would announce to the guard that they were replacing that they now had their area covered.

The main pool is located in the center of the resort area.  At this pool, they show movies on certain nights of the week, have games/trivia times throughout the day (be sure and look at your check-in paperwork to find out the times for these).  Also at this main pool is a ping pong table and a bar.

Below is a list of some of the other amenities this resort has to offer:

I did not have high hopes for the transportation getting to and from the parks.  Since it was a big resort, I figured the buses would be crowded, and we would have to wait forever just to get to the resorts.  But, I was drastically mistaken.  We never waited more than 15 minutes for a bus, and we never had to skip a bus because it was overcrowded.  The buses do stop at the water parks, which takes a little of your time especially considering we did not stop one time where someone actually got off to go to the park.  But, overall, it was a very quick and comfortable trip to the resorts.

To be expected, the rooms are very small.  Each room has a mini-fridge in it, but not a microwave.  The dressing area has a curtain that can be pulled to separate it from the rest of the room, which is a big perk especially when traveling with multiple families.  When we travel with our family, we usually get adjoining rooms and tend to be in and out of each other’s room, so it is nice to be able to partition off the dressing area for privacy.

Pop Century is very, very large and very easy to get lost in.  Just for the record, if you go to a building that looks just like yours, go to the floor you are on, and go to your room number and try your magic band/key; it won’t work!  My recommendation is to familiarize yourself with the landmarks.  The props are HUGE so find the one closest to your room, then you won’t get lost.  Also, due to the size, you risk having quite a walk to get to the bus stop, so I recommend at least asking for a room close to the lobby.

The view on the backside of Pop Century is absolutely beautiful.  There is a beautiful lake that is usually eerily calm with a great reflection of one of Disney’s newest resorts–Art of Animation.  There is also a track that goes around and meanders through both Pop Century and Art of Animation.  I thoroughly enjoyed my morning jogs and getting to explore the various areas of both resorts. 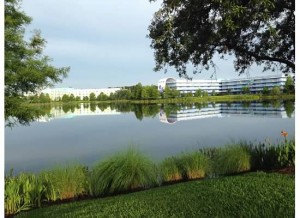 If you happen to be staying on the backside of this resort while Star Wars weekends are going on, you have a great view of the Symphony Under the Stars fireworks extravaganza that they have as part of these weekends.  This was a nice bonus find on our last trip.

One of the only negative things I can say about this resort is that it is very loud.  I am sure some of this can be attributed to it being a larger resort, thus, there are more people.  But, to me, and to others that I have talked to, it seems like the walls are paper thin.  You can hear your neighbor’s conversations, kids crying and more.  On our last trip we took a fan with us that completely alleviated this problem by drowning out the noise.  You can also download sound apps on your smart phone that would remedy this as well.

I would very highly recommend Pop Century to anyone, especially for the price.  It was a fun atmosphere with lots of things to see and do.  We are not ones that spend a lot of time at the resorts, even though there is tons of stuff to do at them.  But, if you wanted to have a rest day or even afternoon, you could easily find plenty of things to do around the hotel to keep you and your family occupied.  Click here for information about this resort or to check availability.  Or, let our Diva-approved travel agent, Patricia, do all the work for you by e-mailing her at all4dreams@gatewaytomagictravel.com!