If you’ve somehow missed the first part of this post please click HERE to see how the race began. 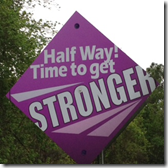 When I left you I had been through the Magic Kingdom and was heading into the “second Half” of the race beginning at mile 7.

They filter you “backstage” for a short time and then you dump out into a narrow road that goes by the Grand Floridian. When you hit mile 7 they play a “motivation song”. This year the online vote selected “Stronger” by Kelly Clarkson. I honestly had my earphones on the whole time, so I didn’t really care because that was in my second stretch playlist set anyway.

This was the part of the race that was the most frustrating to me. For starters it’s much more narrow than the other parts and so If you get behind a group of three or more people who have decided to run in a group they can block you off a bit. I would get trapped behind people and because the side of the road sloped severely to either side of the road you couldn’t really run on it (as I’d been doing to pass people prior to that). So I would get extremely cranky because I was BLOCKED. And this happened for at least a mile and a half off and on. 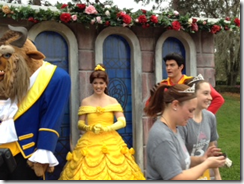 Around mile 8 there was a character stop with Beast, Belle in her yellow gown and Gaston. This one was even more frustrating because (a) the line was long AND (b)people were spilling out into the already narrow running area. So it was really a bottle-neck and a half! 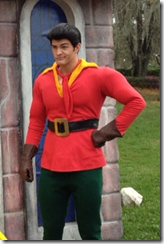 hitting my wall too, but this hilarious look on Gaston’s face did help a bit.

At this point I started to tell myself “Ok, well my race time is going to be absolute crap considering the first mile took double the time it normally takes and I had to wait 12+ minutes for a toilet! My IT band (which gave me trouble the whole time I was training), started hurting after I climbed the big hill around mile 5 heading into Magic Kingdom. So It slowed me down the next four miles. And then, of course, I was getting trapped through all of mile 7 and most of mile 8 behind people who hadn’t trained and stopped running miles before that. I might as well just walk the rest of the way and not destroy my IT band so much I can’t enjoy my remaining 5 days of Disney vacation with my daughter”. So I started walking.

There was a “food station” once you hit mile 9. I saw some energy gels, but I didn’t see much of anything else or I think I would have grabbed it. I was pretty low at this point. Very rarely did I see anybody running in this stretch.

There was a character stop with Goofy in a golf outfit as you ran by the golf course, which I didn’t even snap a photo of. Why I didn’t stop and get pictures made at this point I really couldn’t tell you except I’m sure I looked a mess. As I recall Mulan was somewhere in there too. 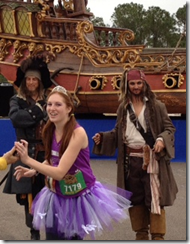 We also ran by Jack and Barbosa again, but this line was long and I didn’t want to offend the hottest character out there with my…. grossness.

Then it gets… um… .serious.

Its time for hills.

I’d heard rumors that there was “A HILL”. An (as in singular) overpass that you cross over and that you should train for that.

That, my readers, is a LIE. There are MULTIPLE hills. There are two pretty darn steep ones before you get into Magic Kingdom. Then there’s the slow grade overpass which goes on forever at mile 10. Then there is a SECOND LEVEL of the overpass that has a steeper incline after that. And then there’s THIS baby (pictured) and another one (another overpass) that is much steeper than the first). Love how everybody acts like its not there. Maybe they conveniently forget… kinda like childbirth. 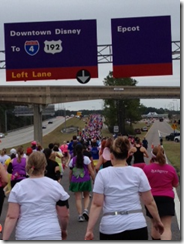 On another note can you believe how many people! CRAZY!

Mile 10 is when the first overpass hits. Then you’re pretty much on and off different gradients of hills until about mile 12. And that is the truth. People that say there are no hills in Florida lie. There are… they just call them overpasses.

At this point I had a DIFFERENT conversation with myself. It went something like this. “You didn’t train for 21 freaking weeks to have this kind of race. You’re running the last four miles”.

And I did. With very little breaks. I went to my happy place mentally and “just kept swimming”. 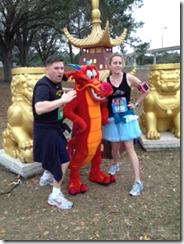 Somewhere along there was a character stop with Mushu and someone else (I honestly cant remember… I told you, I was in my happy place), but it happened pretty close to Epcot.

I’m not sure, but I’m fairly positive I’ve never been so happy in my life to see the Epcot “ball”. 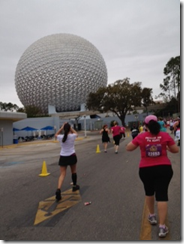 You come in backstage of Epcot, then they run you up to right before World Showcase then turn you around and run you back down. Its only about one mile in Epcot.

ANNNND. .. if you’re in a later corral this means that the park has opened and there are guests in the park. Which was awkward.

Cast-members are “”stopping” guests whenever there are gaps in runners. At one point I vaguely remember shouting “REALLY?! (my headphones were on loud at this point) when a cast-member let people go right in front of me. I was not about to stop. If they got ran over it was their own fault as far as I was concerned. I also yelled at a Brazilian tour guide who had her flag up and was about to march right past the cast member. I believe it was something close to “DON’T YOU DARE!!!” (btw there are Brazilians everywhere at this time of year).

You go out of the park through another backstage gate, and then you start seeing families lined up to cheer on their runner to the end of the race. There is a cast member that is standing there who says You only have .1 at this point!” (you cant see the finish line till you turn the curve). I remember seeing a sign that read “This total stranger is proud of you too!” and it made me cry again.

I expected people would be going crazy as we ran by, but they weren’t(over it I suppose!). At one point I said to the crowd to get them pumped up “come on people! Lets cheer… we just ran 13 freaking miles!” and people went nuts. That was pretty fun.

Then the finish line comes into view. 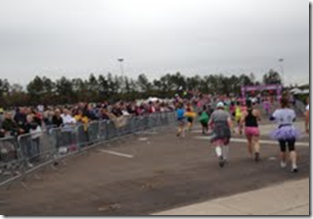 Which is a VERY WELCOME VIEW! 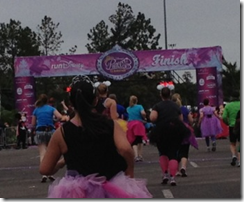 And then you cross! Which you can see I was very excited to do!

I had selected a finish-line crossing song to play on my iPod. My grandmother passed away this July and she would have been SO proud of me for running a half marathon. So I had the song “He lives in you” from the Lion King play. It was very moving and I could feel her as I crossed the line! I highly suggest you pick a song for the castle and a song for the finish line at the least. 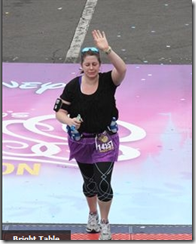 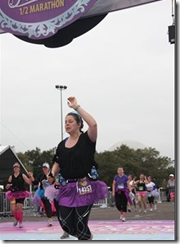 After you cross you walk a bit further. My family was in the grandstands and I could see them immediately. I also was texting them updates on where I was the whole long and they had also signed up to get my times for my 5K, 10K and 15K crossings sent to them as texts so they knew where I was in the race, as well as a predicted time of my arrival. This is a free service Disney offers so be on the look out for it on their site. They mention it in the race emails they send to you prior to the race also 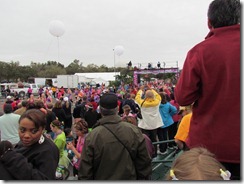 After a bit of walking you hit where they give you the medals.

I got mine from this very sweet old lady who, quite honestly, reminded me a bit of my grandmother, so I cried some more.

At this point your family can NOT get to you. So you get to set the pace of when you want to see people. Honestly I think this is a good thing because some people are just not ready to have their kids jump on them right away.

As you continue down the finish line shoot they have Gatorade and bananas. You keep walking and you stop finally to take a picture

with your medal. You can do the picture with your friends if you’d rather.

Then you walk limp over to the recovery areas.

You walk past tables that have food boxes and drinks for nutrient recovery. There wasn’t anything in mine that tasted particularly good, but I did woof down a few things of gummy bears to help get my blood sugar back regulated.

There’s a station where you can “ice”your… whatever.

There’s a tent that says massage, but I didn’t even walk near it because I was so sore and so tired and just wanted to get a shower.

Then you either go through the tent to pick up your bag you originally checked, or you walk around the tent to meet up with your family.

The lines to get BACK to your resort will be VERY LONG! I was not prepared for this and the standing around to get on the bus just about killed me. I was tired and wanted to collapse, but there was nowhere to go.

And that’s my race!

I have some TOP TIPS for people planning to run the Princess Half Marathon and you can read them by clicking HERE. (As soon as I post it! ) lol