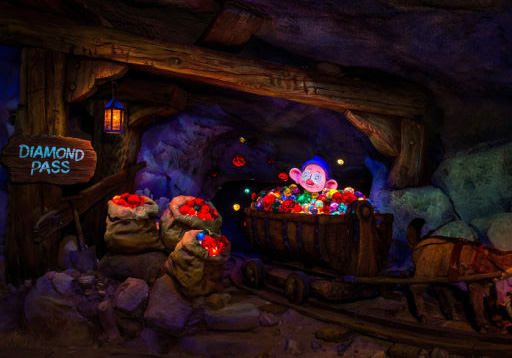 During the 2009 D23 Expo, Disney announced their biggest expansion ever to the Magic Kingdom; New Fantasyland. With it, guests would enjoyed an expanded Dumbo, a Beauty and the Beast restaurant, a Little Mermaid dark ride and several mini castles to meet and interact with Princesses. Most Disney fans could hardly contain their excitement, knowing it was still a few years away, but it did draw one bit of criticism for its very princess heavy roster. So, Disney actually listened to fans complaints and went back to the drawing board a bit. Soon, in lieu of a Pixie Hallow meet and greet, a giant new mountain would become the centerpiece of the expanded land; The Seven Dwarfs Mine Train. And while this highly anticipated and technologically advanced attraction took a little more time to become a reality, the new attraction finally opened in summer 2014. 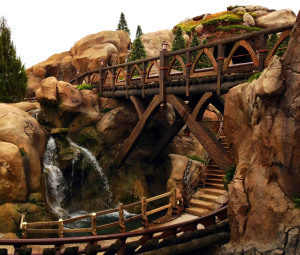 Just beyond the castle walls of the classic section of Fantasyland, you leave the confines of the castle and enter the enchanted forest, where a brand new Magic Kingdom mountain lies. The new area is lush with pine trees and waterfalls. The visual really cements the theme of the expanded area as a fantasy world in the wilderness. The water elements, combined with the racing mine carts, really adds a sense of motion to the new area and truly brings it to life.

The Seven Dwarfs Mine Train is a mini roller-coaster with dark ride elements. Its speeds are somewhere between The Barnstormer and Big Thunder Mountain, and is suitable for most guests 38 inches or taller. 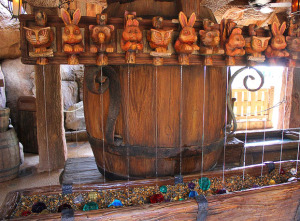 As you enter the queue line, you’ll soon see the Dwarfs’ various work stations. These interactive “games” keep guests occupied in line as they play with water features, sort virtual gems and spin barrels. These are nice distractions for the very long waits this attractions regularly gets.

Once you make it into the mine, you’ll be seated in your mine cart. Soon, you’ll fly out of the mountain along the twisting, high-speed outdoor track. The mine carts feature a new ride dynamic, swinging side to side as you race along the mountain side. Next, you enter back into the mountain as your mine cart begins to slow down. Here, guests are treated to some of Disney’s most advanced audio animatronics. Doc yells “hi-ho” as the other 6 dwarfs dig for gems and sing along. The new animatronics features faces with digital projections, making for some the most fully animated expressions of any attraction character. The technology is amazing and something you’ll want to see over and over again. After leaving the mine, you’ll race around a bit more before arriving back in the station. Here, you’ll get one last treat as you’ll see Snow White dancing with the dwarfs inside their cottage, which utilizes the animatronics from the old Snow White’s Scary Adventures attraction. Keep your eyes peeled for one last surprise outside the dwarfs’ window. 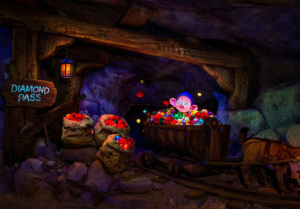 I really like the new attraction. I would not classify it as the cutting-edge, pinnacle of Disney’s modern attraction technology, but it is a great addition to the park. Maybe it wasn’t entirely worth the several year wait, but now that it is here it ranks high on the must-do list. The Dwarf animatronics are terrific, and the thrills are family friendly, everything you want in a Disney attraction.

-Book a FastPass+ reservation before you arrive. Wait times can regularly be 1 to 2 hours all day.

-If you plan on racing straight for the attraction at park opening, I’ve found going the direct route through the castle to Fantasyland isn’t the best plan. Cast members calmly walk guests down Main Street all the way to the carousel and release them to either the Mine Train or the Anna and Elsa Meet and Greet, only to find a line already formed and wrapping around the mountain. I recently experienced that if you go through Tomorrowland and hang a left into Fantasyland, you’ll arrive at the mountain faster.

-Sit in the front row to get the most of the swaying sensation. Ask a cast member to sit in front and they’ll usually try to make it happen.