What I Love About Disney on Ice presents Mickey’s Search Party! 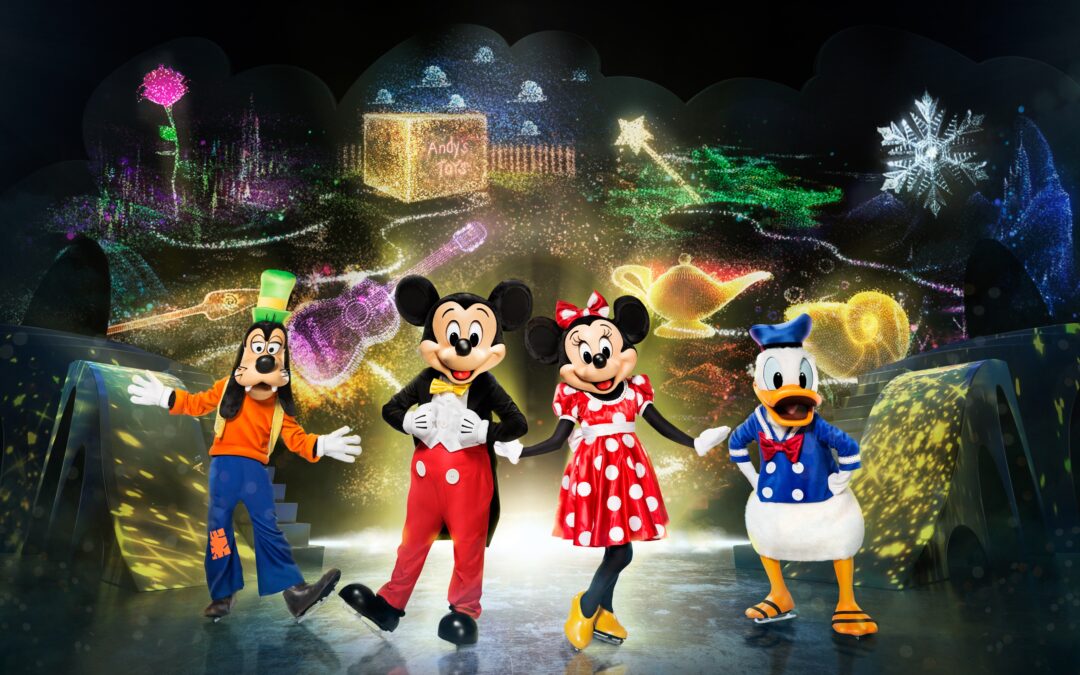 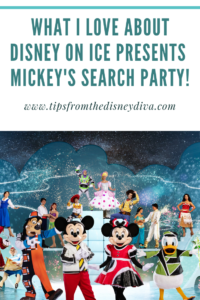 Happy Valentine’s Day Divas and Devos! Love is in the air, and this is the perfect weekend to spend time with those we love! For those of you in the northern California area, we have an exciting opportunity to tell you about- Feld Entertainment is bring back one of everyone’s favorite shows: Disney on Ice! The current production making its debut in Sacramento is Disney on Ice presents Mickey’s Search Party. Feld Entertainment graciously allowed my family to attend the show for free, so I am here to give you not only a review of the show, but tips about everything you’ll want to know before you go.

Disney Diva Tip: This review does contain lots of spoilers so if you wish to be surprised, just know that you should definitely buy tickets to this show and you will have an amazing time! You may now stop reading. If you don’t mind the spoilers or want more details, please continue on! 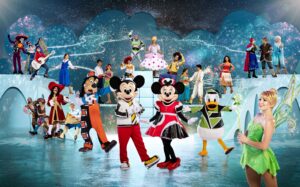 Still with me? Great! Let’s go!

Disney Diva Tip: Make sure you arrive early! This is always good advice so that you have plenty of time to use the bathroom, grab some snacks, or find your seats, but you will definitely want to be punctual to this production. Before the show began, children from the audience were chosen to join some of the infamous pirates of the Jolly Roger to beat on some drums. Obviously this really helped spread some Disney magic to some special members of the audience and created a memorable experience for everyone.

The show starts off with performers sliding around on hover boards and flipping down the ice on trampolines. These stunts definitely raised the excitement level in the Golden 1 Center. The show’s hosts, Alex and Isabella, are also  introduced. But just when you thought it couldn’t be topped, all of the beloved Disney characters (Mickey, Minnie, Goofy, and Donald) made their appearances, and they were met with much applause and cheers from the crowd.

Of course this was too good to be true. We find out that Captain Hook sent Mr. Smee and their fellow pirates to trap Tinkerbell and steal her magic wand. The only way Tinkerbell can be released is to fill the Magic Meter up again, which requires seven special clues from Mickey and his friends’ journey.

Not surprisingly, these special clues all come from some of your favorite Disney or Disney * Pixar productions. The seven stories brought to life on the ice in this production included:

The first Disney classic to be featured was Beauty and the Beast. Beauty and the Beast had a different twist on the usual performance, incorporating silk dancers into the “Be Our Guest” number. Belle also participated, and it was really fun to see her join the ensemble. The song is fast moving, and don’t blink or you will miss some spectacular skating.

After the Beauty and the Beast segment, the Toy Story characters joined in on the fun. Once again the audience was very involved with the show throughout the segment, much to the delight of the crowd. Goofy couldn’t pull down a rope, so two boys were chosen from the audience to assist him releasing the toys from the toy box.

You might expect the crowd to go crazy for Woody, Buzz and Jessie, and of course they did not disappoint. However, despite their popularity, it was really the little green army men from the Toy Story movies who stole the show.  If you’ve ever seen a Disney on Ice production with the army men, you will be happy to know that the army men have really upped their performance too. The army men flipped off of a teeter totter, climbed up a pole, and wowed the audience with their synchronized dance moves. From swinging around and dancing, to passing a giant ball, your littles are sure to be entertained.

The next segment to be featured was Moana. Moana has been gaining some traction during the last two Disney on Ice shows, which I absolutely love. Not only is she a strong heroine and female role model, but the songs from the movie are fun to sing and dance along to. In this performance, Moana came out on the boat, but it was really Maui’s appearance and the song, “You’re Welcome” that got the crowd singing and clapping along. 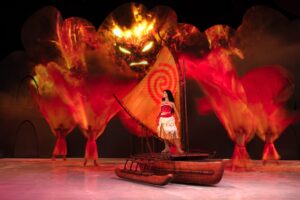 Disney Diva Tip: One of the coolest design elements of this show is the backdrop that changes to fit with whatever Disney classic is being highlighted. For Beauty and the Beast, it was an image of the stained glass castle. For Toy Story, it transformed into Andy’s room. During the Moana segment, it brought to life the story such as the ocean, Maui’s tattoos, and my favorite part, Ta’ka. 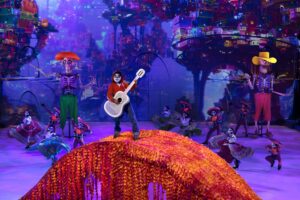 Coco rounded out the first half. This is the first time Coco is involved for more than just an opening act to the show. “Remember Me” was my personal favorite song in the show, and the Dia De Los Muertos celebration was beautiful. It was extremely impressive and featured beautiful skating, but the aerial stunts and acrobatics were what really made this scene. Two ladies sat on swaying poles, while the celebration was going on all around them. The costumes glowed in the dark, which added an eerie supernatural effect and really helped them visually “pop”. 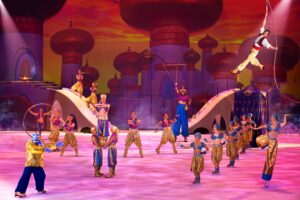 After intermission, we started with the Aladdin segment and the song, “Friend Like Me”. Aladdin and other skaters performed various acrobatic stunts, swung from ropes using one hand, and all kinds of other impressive feats. They also brought the trampolines back out. The strength, flexibility and coordination these stunts required shows you the true talent of the Disney on Ice cast members. The costumes for this segment were extremely sparkly, and they were only outshone by Aladdin and Jasmine’s duet performance. Aladdin and Jasmine seemed to have the most challenging choreography of the night, and both of them performed extremely well. 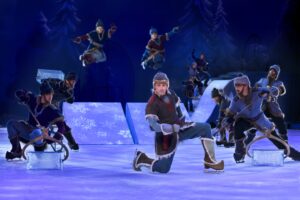 The Little Mermaid segment featured kids from the audience getting a ride around the arena during the song, “Under the Sea”. Ariel is accompanied by various sea creatures including Sebastian, jellyfish, sea anemones, and seahorses. The audience is encouraged to use their imaginations as Ariel swims through the water. When she eventually gains legs, Ariel and Prince Eric perform aerial stunts that left everyone speechless.

The show rounded out with the always popular Frozen. This Disney on Ice production varied slightly from others in the fact that it began with the ice harvesters’ song, “Frozen Heart.” While Kristoff doing a backflip was pretty darn impressive, watching the other ice harvesters do other stunts you might commonly find in a skate park was really fun. And because no Frozen performance would be complete without Elsa belting out “Let it Go”, that is also a staple in the segment. Not to be left out, Anna and Olaf make an appearance, though they appear less frequently than in previous shows.

As all the Disney on Ice shows, this one does not disappoint with amazing acrobatics and silk work, stunning costumes, and the Disney songs we know and love.  *Spoiler Alert* Just in case there was any doubt, Mickey and his friends are able to fill the Magic Meter, and Tinkerbell is set free!

Disney on Ice Mickey’s Search Party will be playing in Sacramento February 13-17th at the Golden One Center in Sacramento, CA. You get an extra day to see the show on Monday thanks to President’s Day, so take advantage and get your tickets now! For a complete list of dates and show times, please see below.

Disney on Ice presents Mickey’s Search Party will be in Sacramento February 13-17th with the following shows:

Tickets can be purchased for as little as $20! And because we love our readers so much, we also have a special discount code for you! When you enter the code: FB20 you can receive a discount that is good for most (but not all) seating levels. Plus with the money you save, you can splurge for some nachos, cotton candy, a souvenir, or just save for your next Disney vacation! To purchase your tickets, you can go here.

I have been taking my kids to see Disney on Ice productions for years, but this is by far the best show we have seen!! Whether you want to share the experience with a partner, the whole family, just your kids or grandkids, or your best friends, you are bound to fall in love with Disney on Ice presents Mickey’s Search Party!!

Disney Diva Disclaimers: The family four pack of tickets is only valid for the 7 pm performance on February 13th at the Golden 1 Center in Sacramento, California.  I am a Feld Family Ambassador. In exchange for my time promoting, attending and reporting my opinion of shows on this blog, Feld Entertainment has provided me with complimentary tickets to Feld Entertainment shows. They also have generously included four tickets for our blog to give away to one lucky reader. Though I do receive these benefits, I ALWAYS give an opinion that is 100% mine.