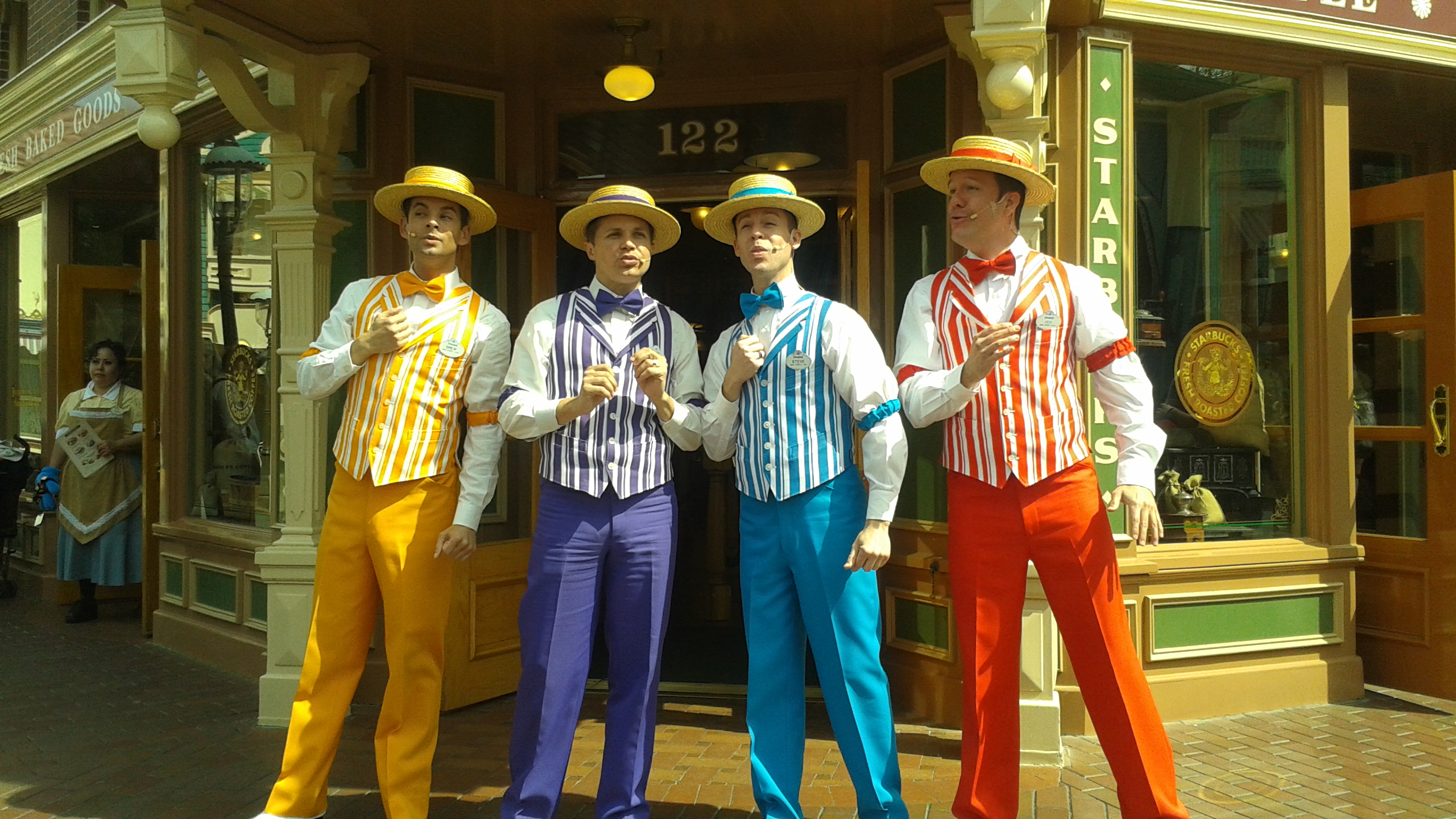 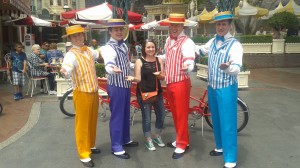 Disneyland has some wonderful live entertainment, but The Dapper Dans ( in my humble and semi obsessed opinion) are the best! They have been a Main Street tradition at Disneyland since 1959 and have continued that tradition at Disney World since 1971. They are hard to miss when they are preforming on Main Street, USA in Disneyland whether they are wearing their colorfully striped suits, or dressed for the Holiday’s they definitely bring the word dapper to mind. But what really makes them hard to miss and even harder to resist is their singing. No matter where you are on Main Street you can hear their voices, because their microphones are wired to speakers along the store fronts. The force is strong in these guys almost magnetic. (At least for me.)

As I was doing some additional research for this article I decided to watch Dapper Dan videos on YouTube. Those videos made me absolutely and instantly happy and then I was instantly sad at the same time. Why? Well because my Disneyland withdrawals suddenly showed up hard and strong. That feeling you get (you know the one) where the need to be there RIGHT NOW  and it is suddenly so strong that it physically hurts. Above all, what watching those 20+ videos did is remind me that I really do love the Dapper Dans. It’s a fact. 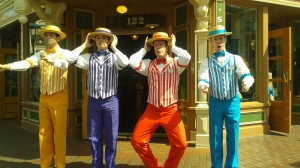 I have a secret though… I used to have no idea who they were and probably would have cringed at the thought of listening to a barber shop quartet. What is it that changed my mind? Funny enough it was the episode of Modern Family when they go to Disneyland during season 3. During their trip to Disneyland, Haley’s old boyfriend Dylan shows up as who would have thought a Dapper Dan. But the real reason is when I am really missing Disneyland I watch this episode to cheer myself up. I have watched it more than 50 times now. (We stopped counting.) The episode was actually filmed there at Disneyland so as I watch it, the sights and the sounds take me back to my happy place. Unknowingly I became a mega fan. 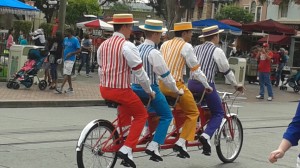 So now when I go to Disneyland and I hear or see them, I end up seeking them out. It brightens my day and that is amazing because my day is already bright because I am already at Disney! They follow a path down Main Street and sing and take photos out in front of the Disneyland Fire House, in front of various shops along Main Street, and then they ride (this is my favorite part I am not biased or anything) their fantastic bicycle built for four around the loop in front of Sleeping Beauty’s Castle, stopping at Coke Corner. I have been seen on multiple occasions running after them through the crowds on Main Street just to get a picture. I can’t resist.

They are a very talented group of men (you won’t always see the same group even on the same day) and if you love a little bit of corny comedy these guys will be right up your alley. Charming, talented, funny what more could you ask for at Disneyland?! Well let me tell you, they also play an instrument it is called a Deagan Organ Chime. Where else are you going to see that?

What is that? The Deagan Organ Chime is a musical instrument that when played each of the eight chimes has three octaves of a single note, comprising a C scale. The Organ Chimes were made by the J.C. Deagan Company in Chicago, Illinois, around 1901. 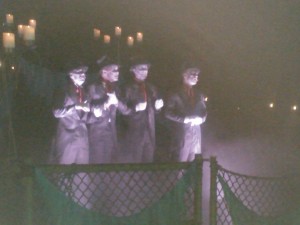 We have been to Disneyland at many times throughout the year and I have found that my favorite time of year to see the Dapper Dans is during Halloween Time at Mickey’s Not So Scary Halloween Party. Where they have been transformed into The Cadaver Dan’s and they sing two of my favorite Halloween songs “This is Halloween” and “Grim Grinning Ghosts” and they are frightfully fantastic whether you catch them at the party or during one of their regular performances along Main Street. That time of year is always a SCREAM! 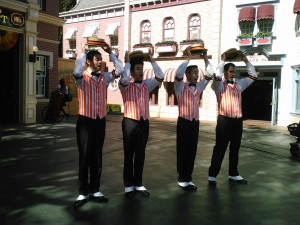 In all seriousness though if you are visiting Disneyland you can’t go wrong enjoying Main Street, USA as Walt himself meant it to be. Do yourself a favor, pick up your favorite Disney snack and wander over and watch the Dapper Dans. Whether you decide to join the crowd or enjoy yourself  from a bench or the even the curb. Take every chance you have to enjoy in those sights and sounds. Who knows maybe you too will unknowingly become a mega fan.

If you want to chat with or grab a photo with these guys they are very friendly and accommodating. On that note though they keep a schedule and they have to move along so don’t be shy. They stop several times during each performance as they move along Main Street so if you don’t catch that first photo op follow them to the next one. They also perform 8 times throughout the day and you can find the show times on the park schedule so make sure you grab one on your way into the park. They also have the show times  posted daily on my favorite Disneyland App MouseWait and it is FREE!