Why Lamplight Lounge Didn’t “Shine” for Us 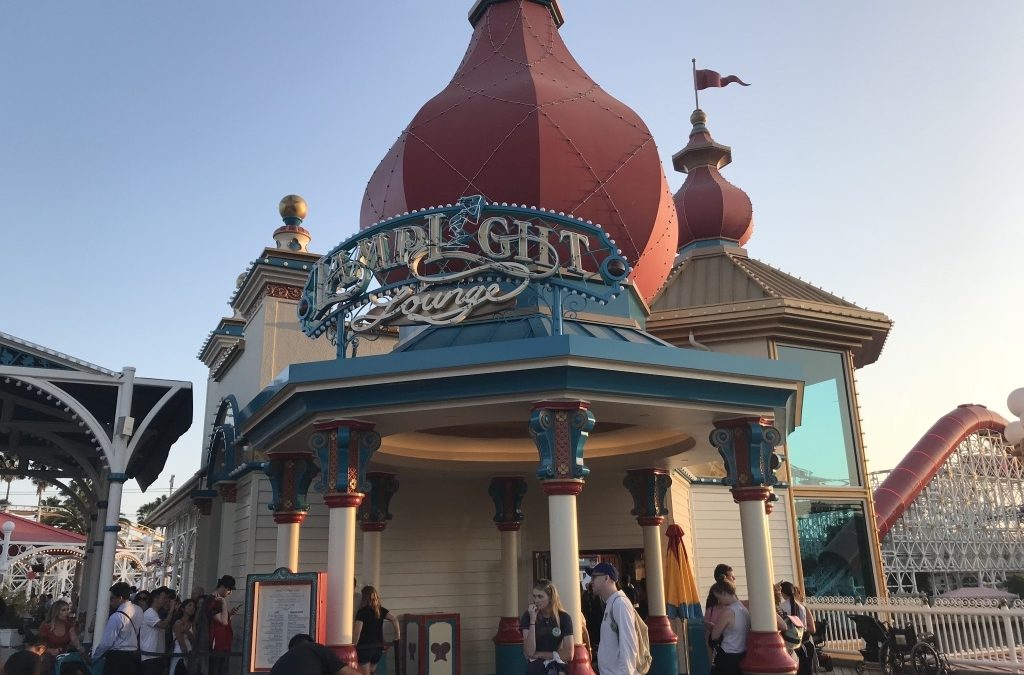 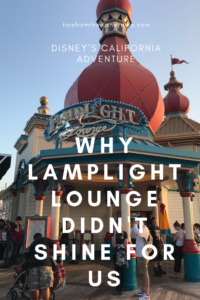 As part of the reimagination of Paradise Pier to Pixar Pier, the popular Cove Bar and Ariel’s Grotto was rethemed to become Lamplight Lounge.  While we never had the chance to visit Cove Bar, on our latest visit to Disney’s California Adventure we did get the opportunity to have lunch at Lamplight Lounge. We were very excited to be able to get a reservation to this extremely popular restaurant. 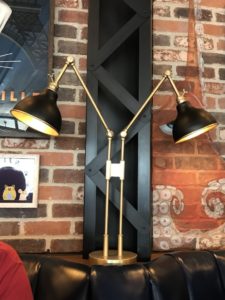 Located at the entrance to Pixar Pier, we were looking forward to spending a relaxing meal, then exploring more of Pixar Pier. (Passholder Diva gives you a tour of Pixar Pier, here.) Unfortunately, our meal was not a “shining” moment of our trip.

Luxo Jr., the famous lamp which forms the “i” in the Pixar logo, was the inspiration for the name of Lamplight Lounge.  The entire atmosphere pays tribute, appropriately enough, to Pixar.  The walls are lined with sketches, posters, and other memorabilia from Pixar artists and films.  Like all Disney endeavors Lamplight Lounge has a story to tell: this is an old warehouse converted to a lounge where artists like to relax. They sometimes leave behind tidbits of their work after they visit, so you naturally find an abundance of Pixar treasures.  Everywhere you looked you could find another Pixar keepsake. It was really astounding! 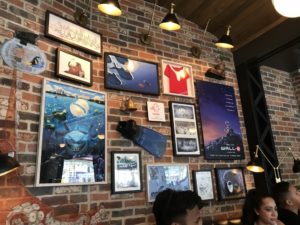 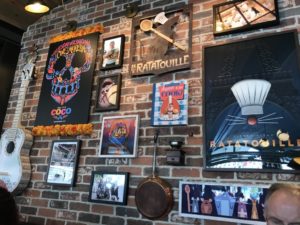 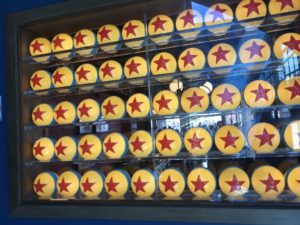 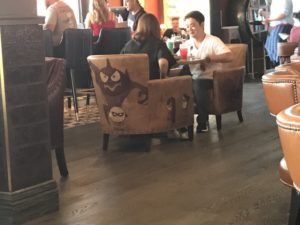 Disney describes the menu at Lamplight Lounge as “gastropub cuisine.”  Open for both lunch and dinner, Lamplight Lounge offers a wide variety of both appetizers and entrees, everything from “Deviled Eggs and Toast” and “Crispy Piggy Wings” to ratatouille, burgers and salads.  The beverage menu is especially wide, offering draft beers, a creative selection of unique cocktails (many with a Pixar twist, of course) as well as non-alcoholic options.  A children’s menu is also available. Reservations are recommended. 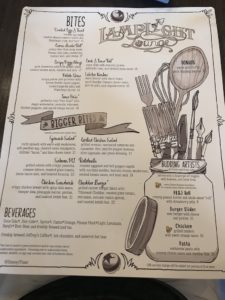 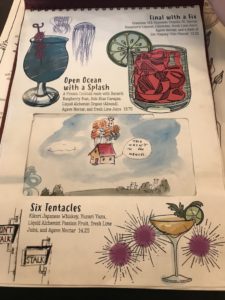 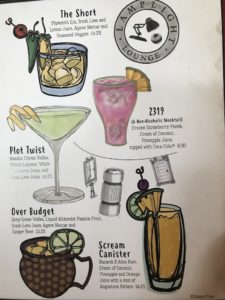 We checked in for our 2:30 reservation and were asked if we preferred indoor or outdoor seating. Since it was a fairly warm day, and we were already hot and tired, we chose an indoor table. Thankfully, we didn’t need to wait very long to be seated.  The first thing I noticed was the noise.  For mid-afternoon, I was surprised at how loud it was.  The second thing I noticed was our wobbly table.  While we were trying to find something to wedge under the table leg to stabilize it, we waited for our server. And waited.  And waited. Once she did arrive with the menus, we asked for water right away (remember – we were hot and tired.) About 10 minutes later we still hadn’t seen our server, but someone was clearing a table next to us and we asked for our water again.  Soon our server appeared, still without the water, but took our order and then finally brought our drinks. 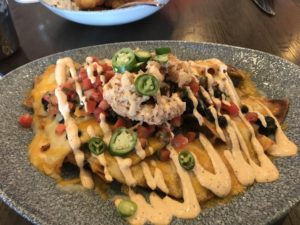 I was anxious to try the iconic Lobster Nachos (warm Lobster and House-made Tortilla Chips with Black Bean, Pico de Gallo, Chipotle Crema, an Aged Cheddar, and Oaxaca Cheese) and my husband ordered the Potato Skins (crispy Yukon Gold Potatoes with Brown Butter-Caper Yogurt, Smoked Paprika Aïoli, and Manchego Cheese).  The nachos were more than enough to be a complete meal – really enough for two people to share if you wanted a light meal.  Although the lobster was a little scarce, there was enough to give it a definite lobster taste.  And while they probably wouldn’t be considered “spicy” by most people, there was a definite “kick” to them. (Full disclosure: I have a fairly low tolerance for spice but found these to be just fine as long as I scrapped off the jalapeno.) 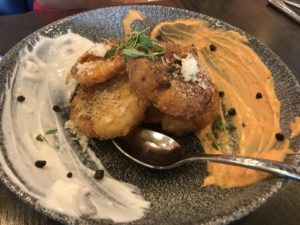 The Potato Skins were a little different than a typical potato skin.  My husband said they seemed more like mashed potato which had been formed into a patty and then deep fried. Not really what he expected, but he never met a potato he didn’t like, so he was happy to eat them.

As I was finishing my Lobster Nachos, I saved a couple of bites and asked my husband if he’d like to try a bit. He pulled a chip out from the cheesy cluster, and discovered a long, dark hair.  We immediately told our server, who offered to bring another plate of nachos.  Given that we had already finished off the entire plate, we didn’t want MORE nachos.  She offered to bring us some mini-donuts for dessert, which I gladly accepted.  I had heard about how yummy they were, and they were definitely scrumptious!  But the more we thought about it, the more we were disgusted by finding the hair and our server’s polite, but somewhat insincere, concern.  We asked to speak with a manager, who also offered to bring us another plate of nachos. (Really – how many people want an entire SECOND meal?) Years ago, my husband managed a fine-dining restaurant, and he explained to the manager that if something like this had happened at his restaurant, the entire meal would have been complimentary, and there would have been profuse apologies.  While both the server and the manager apologized, and they did offer us the complimentary mini donuts, they did not immediately offer to comp the meal.  The manager did agree to comp the Lobster Nachos after our discussion, but we were really dismayed by the entire experience. 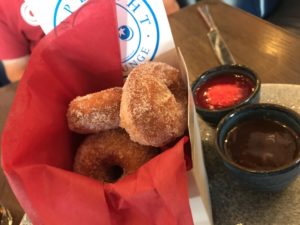 Will I ever return to Lamplight Lounge?  Maybe. The food was tasty, but the thought of the hair in my food makes it really hard to trust eating there again.  Combine that with the noise level, wobbly table, and poor service it’s pretty much guaranteed it will be a long time before I am willing to give it another try. Hopefully our experience was an aberration, and if you choose to dine there, it will be a high“light” of your trip.

Are you ready to start planning your next Disney trip, but don’t know where to start? Contact our recommended travel agent, Patricia at All for Dreams Travel, for a FREE quote!

***Disclaimer – We at Tips from the Disney Divas and Devos hope you enjoy reading our articles and encourage you to share any you feel may be of interest to someone else.  We do ask, however, if you choose to share the photographs attached to our articles, you give credit to the photographer. Thank you for your cooperation and sharing our love of Disney.