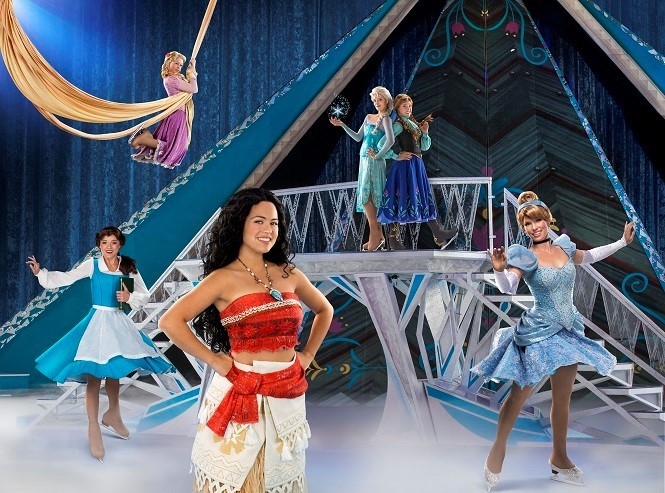 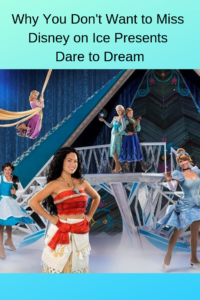 Valentine’s Day weekend kicks off a round of excitement with the return of Disney on Ice to the Golden One Center in Sacramento. Disney on Ice presents Dare to Dream was very special and exciting for my family, as my kids are huge Moana fans! Moana makes her Disney on Ice debut in this show, and trust me, she does not disappoint!

Before I delve too far into the show, let me start with the basics.

Venue: For those of you in the Sacramento area who are wondering what is the best way to see this show, I figure some handing tips about traffic and parking are necessary. Yes, they are a repeat from all of my reviews, but so crucial if you have never been to a Disney on Ice production before. Disney on Ice presents Dare to Dream is playing at the Golden One Center in downtown Sacramento. We had an easy 45 minute commute, but I credit that to us leaving plenty early for the show. I have seen traffic back up on the exit, but that is most common if you get there 30 minutes or less early. Parking is so easy. Just go to Sacpark.org and reserve a parking spot in the parking garage of your choosing. Prices range from around $10-25 depending on how far you want to walk. I usually pay around $15, and walk less than two blocks. Sacpark.org has never failed me, and I have used it more than a dozen times for events/shows around Sacramento. Even if you are at the show a little early (d00rs open at 6!) that is a good thing! There are picture opportunities, snacks, and souvenirs all around the arena…give yourself time so you are not stressed, especially with kids. There is not a bad seat in the house. The Golden One Center is huge, but the staggered seats allow anyone in the audience a good seat. Disney Diva Tip: No matter where you are seeing this production, remember it is always best to arrive about an hour early if time permits, that way you have plenty of time to park, use the facilities, grab a snack, and get ready for the pre-show!

Now the fun part…the show itself!

Pre-show: Before the start of the actual show, Miguel from Coco came onto the ice, and sung and played “Remember Me” on his guitar for the audience. It was very cute and the crowd went absolutely crazy for him. My five year old son wanted to run down and hug him (It took some convincing, but he refrained). 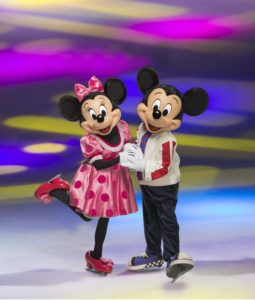 During most of the Disney on Ice shows we have been to, Mickey, Minnie, Donald, and Goofy come out at the beginning and between segments to introduce the different sets. Dare to Dream breaks with that tradition and has an actual person speaking to the audience, in our case, a female narrator. Mickey and his friends still come out for a couple cameos at the beginning and end of the show, but their appearances are brief. 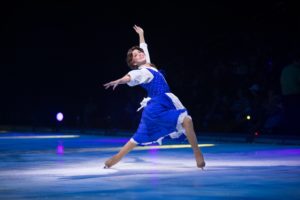 Before Intermission: The first half consists of scenes from Beauty and the Beast, Cinderella, and Tangled. Each segment includes two or three songs from the films, beautiful costumes, and impressive skating stunts.  Our favorite scene from Beauty and the Beast was the battle between the Beast and Gaston, followed by the transformation where Beast was transformed back into his human form in a magical way that only Disney and Feld Entertainment can make happen. 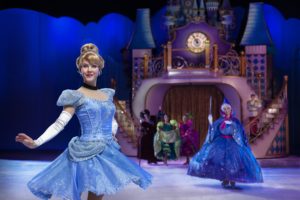 Cinderella’s scene began with the Fairy Godmother whisking Cinderella away to the ball in her carriage. However, this was just the beginning of the fun. The Tremaine family also made an apperance, which was the first time I’ve seen them in a show. If you have ever interacted with Anastasia, Drizella, and Lady Tremaine at any of the Disney theme parks, you know these ladies are hilarious, and the banter exchanged in this performance did not disappoint. Our family was very happy to have these villains whom everyone loves to hate make an appearance. 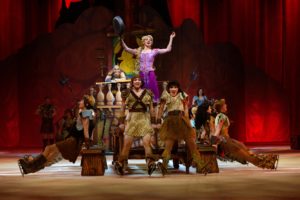 During Tangled, aerial acrobatics were used, which the audience loved. Their strength and grace shows how dedicated these athletes are! I also feel like this show pays much more tribute to Tangled as opposed to other productions. They really dove into the storyline, and even Maximus made an appearance skating around the arena. 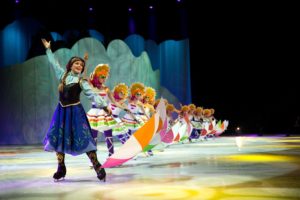 After Intermission: The second half of the show was all about Frozen and Moana. Frozen has been a main focus of Disney on Ice since at least 2015, when my family began seeing the shows.
For those of you who have seen segments of Frozen in other Disney on Ice productions, I will tell you that there are new costumes and elements that are unique to this show. And with the upcoming sequel fast approaching, Frozen still remains a fan favorite. I mean really, who doesn’t love “Let it Go”? 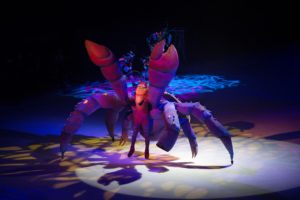 The  biggest highlight of Dare to Dream for my family (and most of the audience) came with our final story:  Moana! This was a great addition to the lineup. Moana and Maui put on a stellar performance. My daughter and the other children in the audience were belting out the lyrics to “How Far I’ll Go”. Disney Diva Fun Fact: The skaters who play Moana and Anna are twins! The kids loved it, the audience loved it, and I loved it! The Moana segment included all of the main songs from the film, some impressive sets and costumes, her boat, and even a larger-than-life Tamatoa. The Kakamora pirate attack scene did not make it into the show, but most other than that, it followed the movie fairly well. My son was a little afraid of the impending encounter with Te Ka, but no worries parents, it is not scary at all. The battle scene was recreated with lighting effects and hanging fabric. A little less dramatic than my older daughter wanted to see, but perfect for the younger kids. I cannot say enough good things about the Moana set. I hope Disney considers a full Moana show, because that would definitely be worth seeing.

Whether you like the Disney classics, or some of the newer films, trust me, this is a show you do not want to miss! Disney and Feld Entertainment always put together a memorable night, but the addition of Moana alone made this show worth it for my family.

Hurry and grab your tickets now to catch Disney on Ice Dare to Dream at the Golden One Center in Sacramento playing February 14-18, 2019.

TICKETS: Ticket prices start at just $20 each!  Tickets are now available for purchase online at Ticketmaster.com, charge by phone at 800-745-3000 or you may visit the venue Box Office. *prices subject to change; additional venue/ticketing fees may apply

Disney Diva Disclaimer: I am a Feld Family Ambassador, in exchange for my time attending and reporting my opinion of shows on this blog, as well as reporting to you the latest discounts offered, Feld Entertainment has provided me with complimentary tickets to Feld shows and opportunities to attend private Feld pre-show events, as well as a family four pack of tickets to one winner chosen at random through Rafflecopter.  Though I do receive these benefits, I ALWAYS give an opinion that is 100% mine.