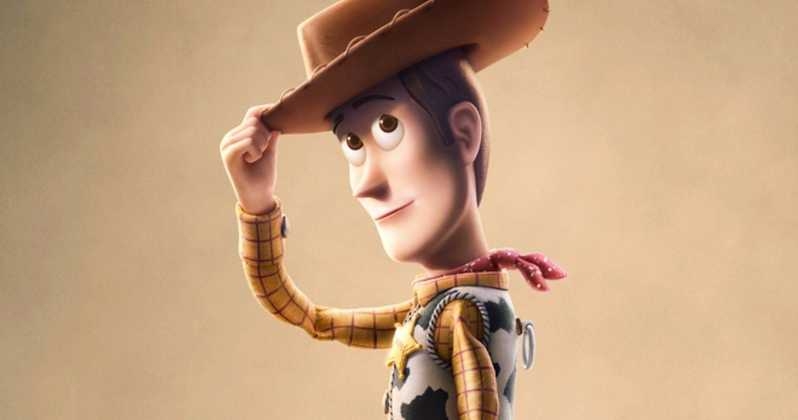 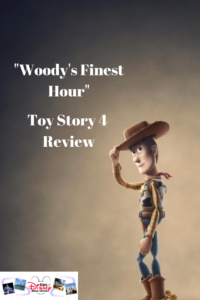 I was there when Tom Hanks accidentally said that Pixar was considering Toy Story 4 shortly after the third movie was released.

I was there when the first photograph of the story planning meeting was revealed at a shareholders meeting roughly four years ago.

I followed every news outlet. Every leak. Every interview. I mean, I am the Toy Story Fanatic after all!

Nothing could have prepared me for this.

Woody has been left in the closet for three playtimes. He even collected his first dust bunny! After playtime though, we learn that Bonnie had Kindergarten orientation. Her dad said she couldn’t bring any toys to school, but after seeing how distraught Bonnie was and how nervous she was about going to school, Woody stows away in her backpack.

This led to the creation of Forky, the spork that has been the subject of so much marketing. Anyway, Forky is the new toy that Bonnie has been finding a lot of comfort in. The problem is that Forky knows he’s supposed to be trash.

Bonnie, her parents, and all the toys go on a road trip in an RV and this is when things really get moving. Forky jumps out a window, declaring himself “litter” and Woody follows him and over the course of the trip back to the RV Woody has confided his thoughts to Forky. Woody talks about how great it was to be Andy’s favorite tow, the adventures he’s had, how he’s been pretty much put aside lately, but that toys can create a lasting impression. This gets Forky excited to get back to Bonnie, but right before they get back to the RV, we find the Antique shop along with the main antagonist: Gabby Gabby. 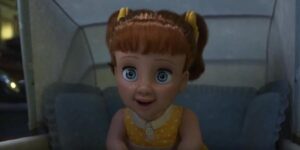 Gabby Gabby was a really intimidating character, giving off classic horror vibes at the beginning then morphing into a James Bond Villianess later on. Image presented for promotional purposes.

Now Gabby is an old pullstring doll from the fifties, much like Woody. Unlike Woody, she was defective out of the box with a voicebox in her back that just didn’t work right. Woody’s works though. So Gabby’s goal is to replace her broken one with Woody’s.  Woody narrowly escapes, but Forky doesn’t and is now held hostage, guaranteeing that Woody will return so that he can bring Forky back to Bonnie.

Woody, by chance, meets back up with Bo Peep who’s been living the “lost toy” life for the past seven years and has been doing great. Her main goal is to help other lost toys become accustomed to the life as well as potentially find another kid that will take them home.

Woody hasn’t made it back to the RV so Buzz Lightyear sets out to bring him back, running into him and Bo by chance. The three of them then make up a plan to get Forky back to Bonnie before they leave the nearby RV park.

Now that’s the set up through the first act. Really anything after this is Spoilers so, please, If you wish to skip spoilers move on to the next big heading. Ok? Ok.

After being caught alone in the antique shop, Woody is confronted by Gabby. She explains how Woody had the chance to help Andy through almost anything as a kid, how that must have been the best feeling in the world, and how she just wants that for a little girl named Harmony who visits the shop occasionally.

Woody makes the condition that she give Forky back once Woody gives her his voice box.

The transplant is done (now for those who aren’t savvy on how pullstring dolls work, the phrases come on a record while the voicebox amplifies it, so it’s not like Gabby has Woody’s voice or anything. Don’t worry about that and Woody isn’t mute. This won’t scar you.). And it turns out that Harmony doesn’t want Gabby. Woody does what he does best and comforts her. “There are hundreds of kids out there,” he says. “one of them… is named Bonnie.” Woody, Bo, Gabby along with Ducky, Bunny, and Duke Caboom start making their way to Bonnie’s RV while Buzz, Forky, and the rest bring the RV back to the Antique shop in one of the funniest scenes Pixar has animated in my opinion.

Gabby, along the way, finds a little girl who is lost at the carnival. Woody and Bo help Gabby get noticed by this girl and the girl takes her home, happy to have found a new toy that gave her the courage to speak with one of the security guards at the carnival.

In the end. Woody meets back with the rest of the toys at the RV. In a scene that will probably bring tears to my eyes forever, Woody is torn between going back to Bonnie or staying with Bo.

Woody dubs Jessie the new sheriff. Woody and Buzz share one last hug and Woody stays behind. His mission with Andy and Bonnie and his friends complete. It’s time to start a new one with Bo doing what he’s really been doing in every movie- getting lost toys home. 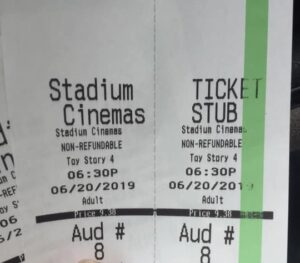 The first big theme of the movie that comes to mind is the theme of “lost and found”. It’s very prevalent where even one of Gabby’s ambushes is set up as “hide and seek”. The beginning of the film sets up the theme with Woody being kind of awkward and desperate. He’s out of place with the rest of the toys hence “lost”. The adventure will eventually give Woody his mojo back and is, therefore “found”. It’s a touching and meaningful theme for the movie and becomes even more touching when considering the Romance themes in the movie.

Woody is “lost” and Bo, while she maybe doesn’t realize it until later in the film, has lost track of what it was like to really be needed by a child and is somewhat lost herself, but through each other and the re-kindling of their relationship, both characters end up in a much better place than they started.

Not to say that this was a strict romance film. While there was a bit of that, much more than in previous installments, the comedy and action was some of the best you could hope for. The antique store had the perfect atmosphere for a thriller like feature to the movie (while still being quite distinct from Sid’s room in the first movie), the carnival added a light and cheery juxtaposition and even though the movie takes place primarily in those two areas they’ve been fleshed out enough to feel real and big and explorable.

Also, there’s a lot here for those who do their homework. 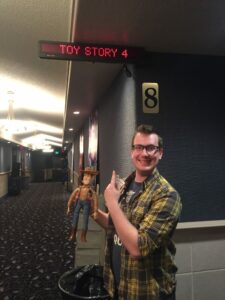 Do you have a passion for classic toys of the 50-70’s? then you are rewarded with nods to those eras of toys. Did you pay attention to Pixar’s early work in short film animation? Have some more easter eggs and a cameo from one of the earliest characters they made!

There’s a lot to unpack in this movie. I could talk about the excellent portrayal of female characters, the beautiful lighting animation and the implications for the franchise in the future, but then we’d be here all day and I’d never get this out on time!

So let me just say this: “Woody’s Finest Hour” was the title of the last and unproduced Woody’s Roundup show in Toy Story 2. He’s done some very cool things in the past but the sacrifices, the compassion and loyalty he shows in this movie make him probably the most heroic character in animated movies. If it accomplished nothing else, it showed that this truly was Woody’s Finest Hour.

The end-all to any movie is if I was entertained and if I felt something. I had a stronger emotional response to this film than I’ve had for any other movie in memory. I understand a lot of that sentiment comes from what Toy Story has meant to me all these years, but that’s part of what makes this movie special. And I hope I never get over it.

Thank you for enjoying this review. Please share your thoughts in the comments and remember to keep wishing on stars.