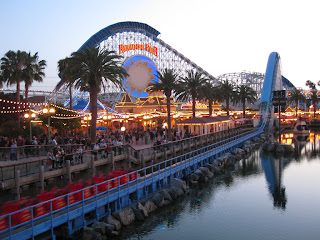 In Spring 2010, Disney California Adventure began showing what some consider to be the best Disneyland Resort show ever to grace the parks. I am inclined to agree that this show, World of Color, is in fact spectacular. 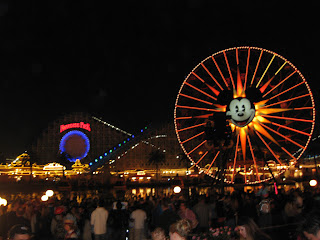 My family was a little late to the viewing party. We just saw it the first time this past Spring. We are annual passholders, and visit the Disneyland Resort frequently, but we tend to leave the parks around dinner time because of our two small children. To be honest, we were also a little intimated by the fact that fastpasses were required to see the show and it required a lot of standing.

When we went this past May to finally see the World of Color show, we were pleasantly surprised at how easy and smooth the whole thing went.

First and foremost, you will need fastpasses for the show. The viewing area and sound is limited in areas of the park other than the designated viewing areas. Fastpasses are available by Grizzly River Run.

Disney Diva Tip: Get your fastpasses first thing when you get into the park that morning. The prime viewing areas and passes for the first showing of World Color go fast.

There are usually two shows, maybe three, in the summer months or during crowded times.

The second way to get fastpasses is as part of a dining package. The Wine Country Trattoria offers a dining package with fastpasses. There is also a World of Color Picnic Package, where you can order a to go platter and get a fastpass with it.

The dining packages do not come cheap, with the Wine Country Trattoria package being in the $30-$40 for adults and the picnic packages being in the $15 range. My Diva Tip: Order a picnic online ahead of time through Disney Dining. This guarantees your fastpass to World of Color. 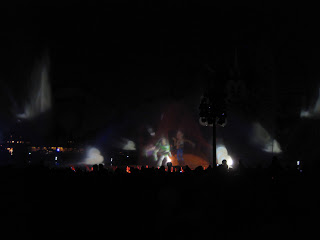 World of Color is a water and fire show. Similar to Fantasmic! at Walt Disney World and Disneyland, this show has pictures and music that are projected in the water.

However, unlike Fantasmic!, World of Color has over 1,200 fountains and fire. Yes, fire! There are times during the show that you are surrounded by water and fire, thanks to the massive show in front of you and the fountains that surround the viewing area in back and to the sides of you.

The show lasts about 25 minutes, and you will be standing. People, in general, start showing up to the viewing areas about an hour before the show. It is okay to sit during this time. In fact, cast members will direct you when it is time to stand up to see the show. Those in wheelchairs or who have special passes will be directed to sitting areas.

The show is held in the Pacific Wharf section of California Adventure. There is a lot of viewing area along the water, though be warned, the closer you get the wetter you get! There are signs letting you know where the wettest areas are. This being said, we were in the middle to the back of our section and still got some sprays of water.

World of Color begins with a back story, how in 1961 color television was limited and Disney had one of the first color television shows on the air. The show then goes on to show how far color has in fact advanced through specific Disney and Pixar movies. While not telling a story directly, it is an awesome thing to see Disney and Pixar characters come to life through the projections in the water. The music is phenomenal and the show is simply visually stunning. I do not want to give too much of the show away, because I want you to see it for yourself!

So if you find yourself in Disney California Adventure on your next trip, check out the World of Color show!
Share this...