Yo Ho, Yo Ho, The Pirate’s League’s For Me 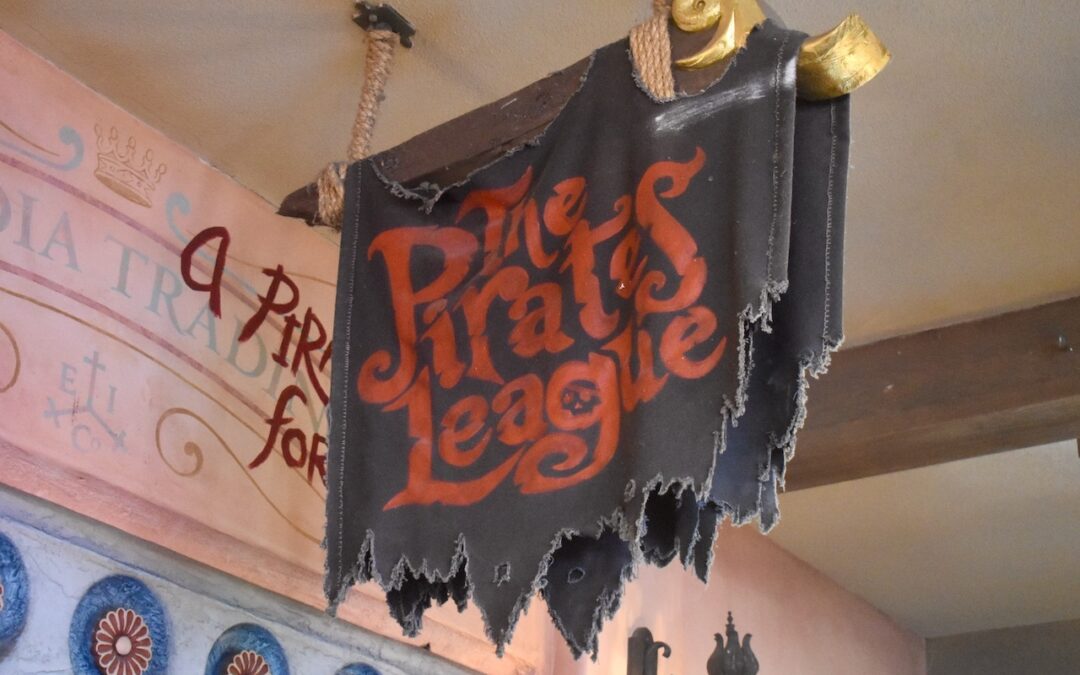 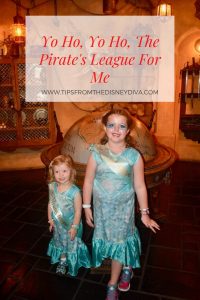 If you walk around the Magic Kingdom on any given day, you are bound to see lots of beautiful princesses with sparkly hair and makeup on. You may even see some handsome knights walking around as well. The Bibbidi Bobbidi Boutique (BBB) gets rave reviews from Disney Magic Diva, Pixie Dusted Diva, and lots of happy little princesses and knights. However, some kids, such as mine, aren’t huge fans of fancy dresses and hairstyles. I tried to talk my girls into visiting BBB on our last trip and neither of them showed the least bit of interest. There is, however, another option. Although it was recently announced that The Pirate’s League will be closing permanently on July 27, there’s still time to give your kids the chance to answer the call of the sea and be transformed into a pirate or a mermaid. Unlike BBB, The Pirate’s League doesn’t have a maximum age for participants, so adults can get in on the fun too! Disney Magic Diva also compares BBB and the Pirates League in her article. 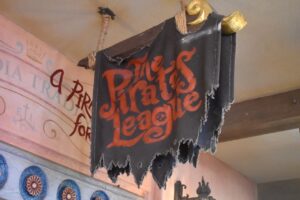 If you’re not familiar with The Pirate’s League, you can find it in Adventureland, just to the right of the entrance to Pirates of the Caribbean. Just like BBB, you can bring your own costume or purchase one from Disney when you check-in for your reservation. We chose to purchase mermaid dresses for our girls before our trip, opting for washable glitter-free costumes that the kids find comfortable and don’t leave a mess in their wake. We saw plenty of pirate costume options for purchase at Disney, but not many in the way of mermaids so I’m glad we brought our own.

When we checked in, they asked us whether we had brought our outfits or if we needed to purchase one. When we told them we had our own, they asked if we needed a dressing room, which we did. After that, we were asked to wait on the benches near the check-in stand until our name was called. We only waited 5 minutes or so before it was our turn. As we walked into The Pirate’s League, we were greeted by Captain Jack Sparrow himself, who was passing through on his way to his meet-and-greet location. He was kind enough to stop for a quick picture and a typical slightly snarky comment on how short my youngest was (the adults found it hilarious, but her sister was greatly offended). 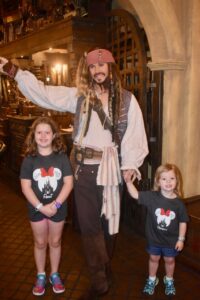 The first step was for the girls to declare their intentions not to steal the pirates’ booty and sign the mermaid book. I thought it was great that they allowed my youngest to scribble in the book since she isn’t old enough to know how to write her name. Next, we were shown to our dressing room so our little mermaids could get their tails on. Then they were shown to their chairs. My youngest was a bit apprehensive about her makeover, so I was pleased to see they were sitting next to one another so she could watch her sister and see what was coming next.

They started by painting the girls’ fingernails. Both girls were excited to have shiny teal nail polish, and they got to keep the leftover bottle at the end of their makeover. 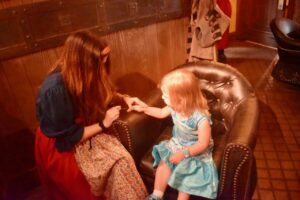 Next came the hairstyle. My oldest is extremely tender-headed and I wasn’t sure how well she would do with this. Thankfully, Carolyn took care to explain what she was doing and be as gentle as possible and my daughter ended up tolerating it well. My youngest politely declined any hairstyle beyond letting them put a magic color-changing flower clip in her hair. 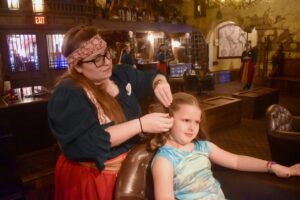 After hair, it was time for makeup. Once again, my youngest politely declined to have any makeup done. They were able to talk her into a little lip gloss and some glitter on her hands. I was impressed by how patient and understanding they were, trying to find ways for her to feel included when she didn’t want to participate in the usual makeover activities. My oldest went for the full experience and allowed them to do scales and eye makeup. She was a little apprehensive as the eyeliner was applied, but overall she seemed to enjoy the experience. After they were made up the girls were gifted a pretty mermaid bracelet, a makeover palette, and the nail polished that was used on them earlier. We also got a “de-scaler” towel for when my oldest decided she was done with her makeup. Then the girls were announced as mermaids to the entire room. The final touch was a turquoise The Pirate’s League sash that my girls wore for less than 5 minutes (just long enough for me to snap a few pictures). 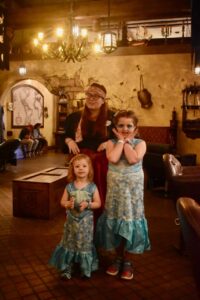 After their makeovers were complete, Carolyn took us over and showed us Captain Jack’s secret room. Inside, the girls were sent on a mini treasure hunt. They found a chest that had special mermaid necklaces inside and were each able to choose one to take home. We were then given as much time as we wanted to look around this room and take some final pictures before settling our debt with the pirate at the cash register. 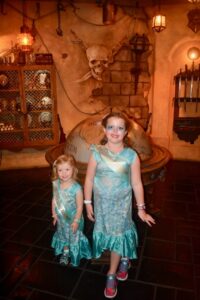 As a final touch to our mermaid morning, we decided to pay a visit to the most well-known Disney mermaid so the girls could show off their scales. It didn’t take too long after that for both of them to decided to change back into their normal clothes, but my oldest did wear her mermaid make-up for the rest of the day. 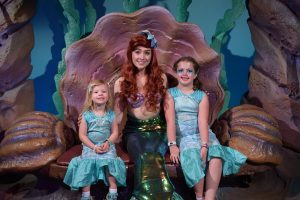 Overall, my girls had a great experience with their mermaid makeovers. It was nice to have a non-princess option that included a less fancy hair-do for my tender-headed girls. I am sad to learn that soon this option will be closing and hope that BBB will add some sort of mermaid and pirate options to their menu.

Would you like help planning your next trip to Disney, or do you need a free quote? Contact Patricia at All for Dreams Travel!