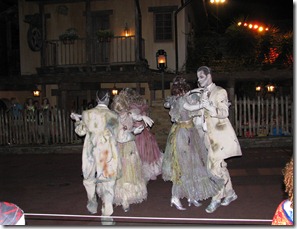 The Diva family has been to Mickey’s Not So Scary Halloween Party (aka MNSSHP) multiple times and really loved it! (this post is long, but it is CHOCKED FULL of info! Please read it if you’re going to MNSSHP!)

First off this is a TICKETED event. Which means you pay for it on top of your park tickets. You can buy the tickets by clicking HERE. If you’re planning a trip to WDW in 2011 from September 11th to Nov. 2 2012 you should look to see if there’s a party going on during your trip because its totally worth it. You should also know if you’re not planning to go to the party that Magic Kingdom kicks you out of there those nights if you’ve not bought the ticket. So you do NOT want a dining reservation in the evening of a Halloween party if you’re not planning on buying party tickets.

So here’s a few more tips just for you! 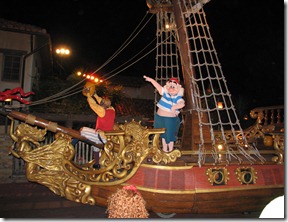 1) Arrange your day!!
You should have “LIGHT” morning in the parks. Which means, not tons and tons of walking. Just plan to do a few things and head back home for a BIG rest and maybe a dip in the pool. Should be a very relaxing morning because you’ll be up LATE!

The party happens at Magic Kingdom and goes from 7:00pm to midnight. You should have listened to the Diva and gone back to your resort for a mid-day nap. (and that needs to be a LONG nap). At about 4:00pm they open a few turn-styles at Magic Kingdom that are specifically designated for the party, it usually says “Special Event” on the signs above. Then you will scan your MNSSHP ticket and you will get an armband like the one below. If you are already in the park you’ll have to come to the FRONT of the park to get your armband, but remember you can get it as early as 4:00pm. As they get close to the party starting you’ll see cast members EVERYWHERE asking you to show your armband. Just hold it up and keep walking, but its really important you have it BEFORE the party starts.

The party officially starts at 7:00pm so you want to make sure you’ve eaten dinner PRIOR to the official start of the party. The last thing you want to do is waste valuable party time getting food.
Ok, so I’m about to get mom of the year award here, but we hop our kids up on caffeine in the late afternoon prior to the party. haha! Its true. We jump those babies up and then we stay, literally, till the park is kicking us out at midnight and then we sleep in the WHOLE MORNING the day next day, as in we don’t go to the parks until after 1:00pm the next day (usually to Animal Kingdom because it’s a short park day for us). I have never had my kids freak out OR fall asleep, but its because we take the big nap before (and we never drink caffeine, so it actually works the way its supposed to on them. haha. No need to call social services, we won’t be going this year. Either way, IT WORKS!) 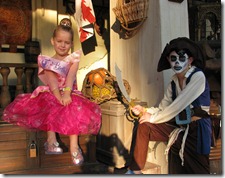 2) Bring Costumes with You
A big part of what makes the party so much fun are the amazing costumes tourists wear on MSSHP nights. Some will be so amazing you’ll be just as excited to take photos with them as you are to take pictures with the characters. However costumes are insanely expensive at WDW. You can save a lot of money by purchasing costumes ahead of time. We buy ours off of ebay and bring them with us.

Remember a few things when you choose the costume:
(A) Many years it is still extremely HOT and HUMID in the evening during the months the MNSSHP happens. The more layers your costume has the more miserable you will become.
(B) Its STILL Disney World which means you will still be doing a lot of walking. So high heels, heavy boots, or just really uncomfortable shoes is a terrible idea. Make sure you pack a pair of tennis shoes for your children if they initially opt for plastic princess heels.
(C) Its also a good idea to bring a change of clothes just in case you get tired of wearing your costume.
(D) Its the ONLY TIME that ADULTS can wear costumes in the park! So take advantage of it! 🙂 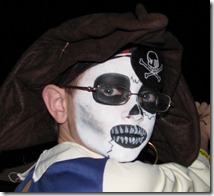 With the airline baggage costs completely out of hand it might not be possible to pack costumes for everybody. Never Fear! Bibbidi Bobbidi Boutique and Pirates League (read about them by clicking on the words) can deck you and yours out for the party! Make sure you don’t waste valuable party time getting “done up”. See if you can schedule the appointment earlier in the day, but not so early that your make-up all melts off of your face. My 8 year old LOVED his trip to Pirate League and many people stopped him to tell him how great she looked. 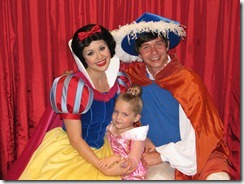 4) Look for the rare characters. One of the reasons I love MNSSHP is that many of the hard to find characters are there. We have had pictures made with Tarzan, Jane and Terk from the movie Tarzan, Baloo and King Louie from Jungle Book, the Mad Hatter and the Queen of Hearts, Snow White with ALL 7 of the Dwarves, and MANY villains. Also you can catch the Princes WITH their Princesses which 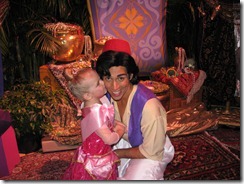 We’ve also been able to take our pictures in front of the Cinderella’s Carriage. To me, you can ride the rides ANY TIME, there’s only a few times you can get pictures and autographs with these characters, but that’s totally YOUR CALL. Some people choose to ride the rides that normally have long lines instead.

And the dance parties ARE a lot of fun. I DO NOT RECOMMEND YOU DO MUCH TRICK OR TREATING. This is a total and complete WASTE OF TIME! Tell your kids you’ll buy em some candy later on or just do about 5 minutes of it and stop. Go do the parts of the party you’re actually paying for! 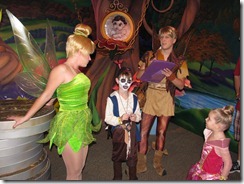 FIRST PARADE (8:15pm) : First off you should know there are TWO “Boo to you” Halloween Parades! There’s one at 8:15pm and the second is at 10:30pm. You want to go to the SECOND!!! (and you can because your kids are hopped up on caffeine. lol). It is FAR less crowded and then you can ride the attractions while everybody else is watching the first parade. The second parade STARTS after the fireworks end. So I’ll tell you about it first and then come back to the second parade.

FIREWORKS (9:30pm): Fireworks begin at 9:30pm. Best location? Wherever the heck you can 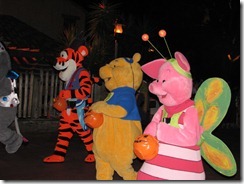 get. haha. Because you will be riding rides during the other parade that means all the prime locations on main-street will be completely full. If I were you I would try to get either to the lowest level of Tomorrowland Terrace if you can, or right on the side of Casey’s Corner hotdogs (as close to Main Street as you can get). Lets assume you can get close to Main Street. This is THE BEST fireworks show at Disney World PERIOD in my opinion! You can get a preview from Disboards at http://youtu.be/cc1XImKG-ko

* As soon as the parade is over you want to start trucking it toward Adventureland. Now you will be, literally, swimming up-stream. So have a good hold on your children and just stay to the far right. Everybody will be pouring out (which is good news for you because the park will be almost empty for the rest of the night. Thus the importance of having kids full caffeinated* 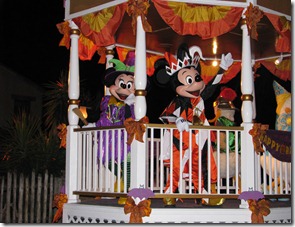 SECOND PARADE (aka The one you’re going to)

10:30pm: Ok so you’ve trucked it to Adventureland. The first tunnel on your right in Adventureland you’ll take to pass you through to Frontierland. Find a spot somewhere around there to get comfy (it should be almost empty after the fireworks). The second parade will leave from Frontierland, at the gate right beside Splash Mountain and go towards the front gate. If you watch the parade from here as soon as its passed by you you can walk BACK to Main Street the way you came and you’ll beat the parade or you’ll get to watch it twice.

* But don’t forget you’ve still got some TIME to ride rides!!! If you wait for the parade to go past you in that area you can get back to ride some of the Frontierland rides, Liberty Square or even Fantasyland before the party officially ends. Remember they give you some time after the party “ends” to get out of the park, so there’s not a crazy rush. I’d ride rides RIGHT UP to when they’re shutting them down. That’s just me, you gage how long you can take it, but you’ve paid to go all the way up till midnight. *

Another hot Diva  tip – The monorail DOES NOT RUN after the party. SO if you parked and need to get back to the Ticket and Transportation Center you’ll have to take the ferry. (which means a long line. Just go ahead and prepare for it). This also means people who are on the monorail loop have to a) walk b) take a water-taxi boat. If you’re staying at the contemporary JUST WALK it will be wayyyyy shorter.

This party is GREAT and you will have an AMAZING time if you plan correctly! Got any questions? Let’s hear ’em I’m happy to help!