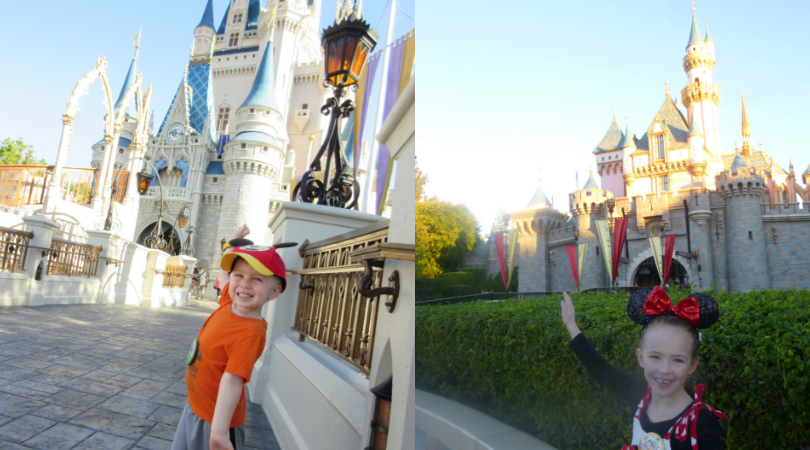 One of the aspects of Disney that’s so appealing to many people is the attention to detail in any project.  Whether it’s a film or theme park, Walt Disney always wanted to tell a story.  In order to more successfully immerse the audience in that story, he was passionate about the details. 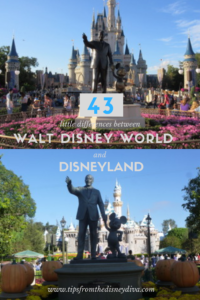 Sometimes when visiting Disney Parks, I’m so overwhelmed with the atmosphere it’s easy to overlook those important details.  With each visit to Magic Kingdom at Walt Disney World Resort (and there have been scores of them), I discover new elements I never noticed before.  But over time, certain aspects become familiar. I know where to find the hidden Mickey in the Haunted Mansion ballroom scene, when to expect the drop in Pirates of the Caribbean, and when to pose for my attraction photo on Space Mountain. So, when I visit Disneyland Resort, and find some of the details to be just slightly different, I notice.

I recently was pixie dusted with the chance to visit both Magic Kingdom at Walt Disney World Resort and Disneyland Park on the same weekend. Seeing both parks within 24 hours, while each was fresh in my memory, made it even easier to spot the slight differences in the parks. It inspired me to create a list. (If you’d like to read about more general differences between Walt Disney World and Disneyland, check out my article about our first visit to Disneyland, here.)

Please understand, this comparison is in no way meant to disparage one park over the other – much as a mother would never have a favorite child, I sincerely and deeply believe each park is a treasure with its own unique charms, quirks, and gifts. But just for fun, I wanted to keep track of what differences I could spot.  So, here’s my list, in no particular order:

These are just some of the differences my family has noticed between Walt Disney World and Disneyland. We know there are many, many more!  What have you noticed?

Or, if you haven’t made it to both parks yet, I know someone who can help you make that dream come true! Contact Patricia at All for Dreams Travel for your FREE quote and start planning your next Disney trip.  Then let me know what differences you find!