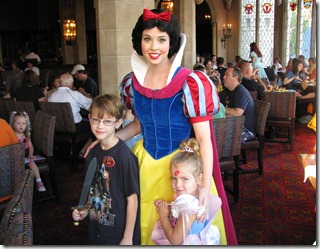 Author: Disney DivaIf you’re bringing your princess, or princesses, to Walt Disney World and are on the Disney Dining Plan you might be trying to decide where you should book.
So here are a few meals that the Diva Family would suggest and don’t forget you can book your reservations 180 days before your trip at http://disneyworld.disney.go.com/reservations/dining/

When you first walk in the door there will be a “featured princess” who your family will have the opportunity to take a picture with. This princess does not rotate amongst the tables, so be sure to get your picture with her with your own camera at that time. During our visits its always been Belle. There will be 4 that walk around. Cinderella, Princess Aurora will be there consistently and you will have two of the following: Jasmine & Princess Ariel, Snow White.

The Diva Family recommends you go for BREAKFAST as the food is far more AMERICAN and far less NORWEGIAN so its easier to get the little ones to take a taste.

2. Cinderella’s Royal Table – MAGIC KINGDOM: There are  three things that make Cinderella’s Royal Table different than Akershus. (1) It is TWO Character Meal credits instead of one like Akershus is (and a lot more expensive if you’re not on a meal plan) (2) They have the wishing ceremony, and (3) it is in the castle. Many people have a fantasy about eating in the castle, but for me, personally, it was not that different than Akershus. So if you just can’t get into the castle and are worried about that, DON’T BE, Akershus has the same princesses and a very similar experience. (Note: There are SOME people out there who are obsessed with the castle and would firmly disagree with my assessment there). 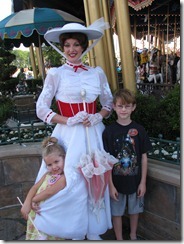 3. 1900 Park Fare – GRAND FLORIDIAN RESORT 1900 Park Fare actually has three distinctly different meal experiences based on which meal you attend. So WHEN you decide to go effects what experience you see and which Characters you meet.
For Breakfast at 1900 Park Fare they have the Supercalifragilistic Breakfast. Characters include: Mary Poppins, Winnie the Pooh, Alice in Wonderland and the Mad Hatter. You can make reservations from 8am to 11:15am.
For Dinner at 1900 Park Fare they have Cinderella’s Happily Ever After Dinner – At Dinner you can meet Cinderella, Prince Charming, Cinderella’s two step-sisters. We were able to meet Lady Tremaine on our visit as well, but I don’t know that she is there every time. I have had both good and bad experiences here both with the food and with the characters.

An additional option is the Wonderland Tea Party, which is at 1900 Park Fare from 1:30-2:30pm but unlike Character Meals, it has a maximum of 25 children who can attend, an age range of 3-10 years old, and is not a part of any Disney Dining Plan. If you’re interested in this tea-party (where parents are welcomed but NOT REQUIRED – which means you can go book a spa 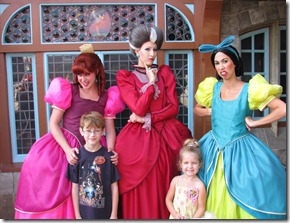 treatment during that time) you can call 407-WDW-DINE to book your reservation.
The Tea-Party allows Alice in Wonderland Fans a lot of one-on-one time with Alice and the Mad Hatter while the children decorate their own cupcakes and eat heart-shaped peanut butter and jam sandwiches, rice krispie treats, and apple juice.

Princess Character Meals can save you a lot of time in the parks because you wont be standing around WAITING in a giant line to get your favorite Princess’s autograph.They are expensive because they’re a table service, but the time you get to spend one on one with your favorite girls and the LOOK on your own princesses face makes them worth every penny.