D’land Diva and I went to Disneyland for the first time just over a month after our first date. Disneyland became a magical place for us to spend time together. In the last 10+ years we have become Disney fanatics and have experienced many happy celebrations while at Disneyland. Every once in a while we have the opportunity to experience another hobby/fascination with Disney.

Our first experience happened in 2002 when the Anaheim Angels won the world series. D’land Diva forced me to take the day off from work so that we could rush to Disneyland to see the Angels on the parade corridor in Disneyland. I was able to watch my favorite baseball team move down the parade route with the world championship trophy. In 2004, a four foot swimming pool was constructed on Main Street USA for a swimming exhibition with Ian Crocker, Michael Phelps, and Lenny Krayzelburg.

I’ve personally been a fanatic of the space shuttle for most of my life. I have fleeting memories of my family watching a night launch while we were on vacation in San Diego when I was a small boy. I had always wanted to see a launch in person. On one of our visits to Walt Disney World, D’land Diva and I arrived in Florida three days after a shuttle launch and left three days before the shuttle returned. At the time the program was still in full swing and the thought that the shuttle program would be shut down wasn’t even a thought.

I was very sad to hear that the shuttle program was shutting down. I was a bit amazed that Endeavour was going to be placed in the California Science Center. When the details started to emerge for the flight to LAX I started to wonder about the possibility of catching the last shuttle flight. Endeavour was the last space shuttle to be built and was primarily constructed just north of Los Angeles in Palmdale. Congress authorized the construction of Endeavour in 1987 and it achieved flight status in 1992. Endeavour blasted into space a total of 25 times. Possibly its greatest accomplishments were to fix the Hubble telescope and to deliver the last piece of the International Space Station.  More information on Endeavour can be found here!

Once again, my wife encouraged me to take off the day. A few weeks before the flight we were at Disneyland while a practice run was being conducted by an F-18. We happened to be in line for Alice in Wonderland when the F-18 buzzed overhead. The wheels in my head started turning and I wondered if I had a chance to catch the shuttle over Disneyland. My only worry was if the shuttle would fly past Disneyland before the park was opened. The shuttle flight from Florida was delayed earlier this week because of bad weather and this change made the possibility of heading to Disneyland to see Endeavour possible.

Getting to Disneyland today was challenging. The traffic around Anaheim was really busy and the parking structure was a mad house. After almost 40 minutes we were able to finally park. We finally reached the trams about 9:30am we noticed a few hundred people lining the top level of the parking structure. When we reached the front gates we found numerous signs announcing the final flight of Endeavour. Getting into Disneyland wasn’t that bad and I quickly walked around the park to check out the best location for pictures.

First, we stopped in the hub. I had visions of taking pictures of the shuttle behind Sleeping Beauty’s Castle and quickly being able to get shots of the shuttle next to the Matterhorn. Something didn’t seem right though so we moved on. I had another thought that had come to me just a few nights before, what if we could take pictures on the top level of Innoventions. Innoventions didn’t open until 11 am and within five minutes it had at least 50 people staking out their spot.

Living in the Los Angeles area I have many friends and family who were also very excited to see the shuttle. I have friends who decided to brave the Los Angeles Observatory, many friends and family over at the Jet Propulsion Laboratory in Pasadena, some friends who camped out on the top of their office building, and my pastors decided to camp out on the church lawn. With the benefit of having a smart phone for the first time in my life, I was able to use both Facebook and updates from family and friends to know when I should start looking. This also helped me to make some new friends. Disneyland made two announcements to look up into the sky to see the shuttle fly overhead.

By the time Endeavour made its way into Disneyland’s airspace, Innoventions had a few hundred people perched on the top level. One lady near us was the first to shout out “There it is!” An excitement came over the group and you could hear the cheers and gasps of air. The shuttle flew on the south side of the castle and almost went directly over our heads at Innoventions. Immediately after the shuttle was out of sight people started cheering, clapping, and giving high fives to each other. It was one of the few times that I remember having goosebumps. This is probably the most exciting thing to happen in Innoventions since… ???? 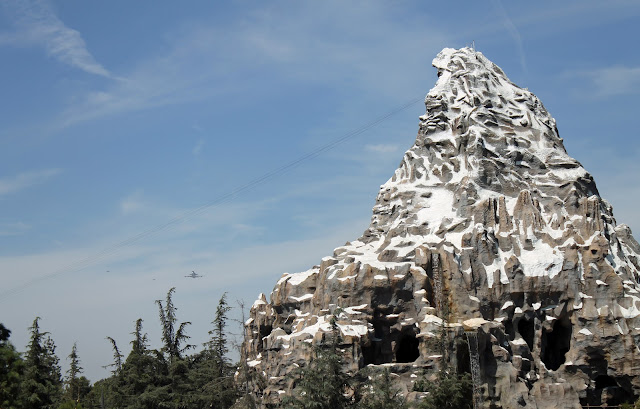 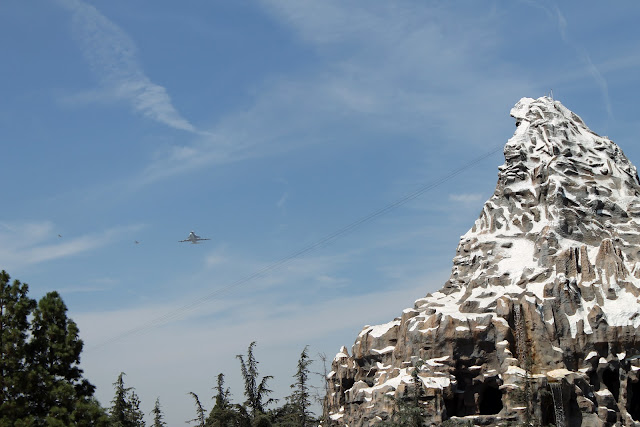 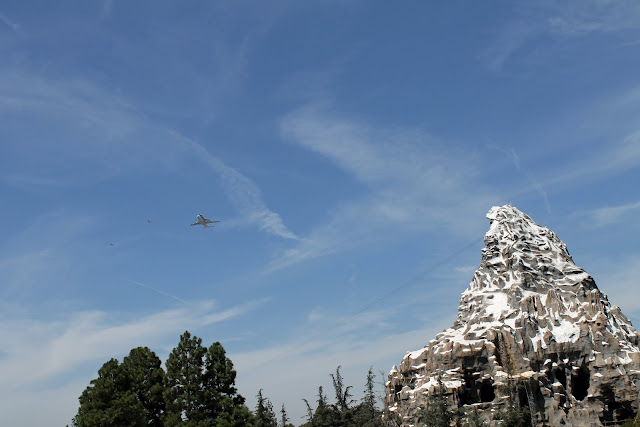 This week, I’ve spent a lot of time reading about Endeavour’s last flight. I didn’t want to miss this opportunity to see history in the making. Endeavour’s last flight was a rock star story. Many people flocked to various locations across the country to see the last shuttle flight. Los Angeles had the best view of Endeavour as it made it was across the skies for almost an hour before finally touching down for the last time at LAX. I was very happy to have been able to see this last mission and I was able to share it with my family, while at Disneyland! I doubt I will ever have another experience quite like this again but I think I might have said that about my favorite baseball team in 2002!

We will see you soon at the California Science Center!