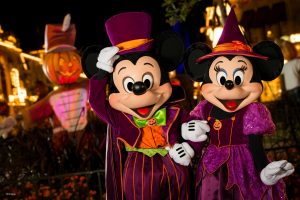 This is, and always has been, since I’ve been attending Mickey’s Not So Scary Halloween Party (MNSSHP), my all time favorite parade. From the music, to the dancers, to the characters, to the villains, they are all amazing! Halloween has always been one of my favorite holidays. I would try to make sure the twins had awesome costumes, got all the candy their heart desired, and since it was close to their birthday, try to take them to Disney, especially to the MNSSHP. This Halloween was different. Every one of us dressed up in our themed costumes, and headed out to Magic Kingdom for the most epic Halloween party ever!! 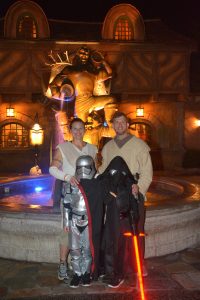 We normally watch the later parade for two reasons. 1. You have a better chance to get a good spot on the parade route. Most of the little ones have left since many people leave after the first parade, so it’s a tad bit less crowded. 2. We don’t have to stop riding our favorite rides to grab a parade spot and then wait in long lines with the others from the parade. Disney Diva Tip: During the parades, ride wait times are low, so if there is a ride that usually has a longer wait time, go try and ride it! 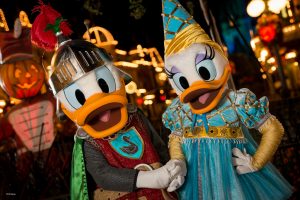 We now have three favorite parade viewing spots along the parade route. In times past, we have set up in Frontierland, right across from Splash Mountain, across from Pecos Bill’s Tall Tale Inn Cafe, and against the fence. We have watched from this spot a couple of times and have really enjoyed it. This is actually where the parade begins and it’s fabulous! The characters have been very interactive with us at this location. (Make sure to click on the pic to see the areas I’ve marked.) 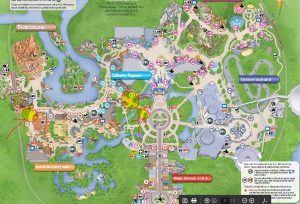 One of our other favorite spots is in Liberty Square by Sleepy Hollow Refreshments. I love this spot for two reasons: it’s an amazing spot to view the Headless Horseman, you can see him coming and going, and you get to see the characters and floats more at length than over in Frontierland. Because you’re able to see the dancing and characters for a longer amount of time, you have a better chance at getting the pictures you want and capturing the perfect shot. Over in Frontierland, you only have a few seconds for a good picture because you’re at the parade start.

Our third favorite viewing spot we found this year. We had timed our night to go straight from Hocus Pocus Villain Spelltacular to the parade. We walked directly over to the walkway/bridge area to go to Liberty Square, but low and behold, a perfect viewing spot emerged (thank you Pixie Dust! And maybe the Force!!) We were able to have the boys sit down with us directly behind them! It’s all about Disney magic!! I think I like this parade more than my family if you want to know the truth!! Now, on to the parade!!

Let me be honest with you, there is only one section of this parade that I don’t jump when I watch it, and it’s extremely hard to narrow down my favorite parts, but I will try!! My utmost favorite part is the Headless Horseman. Unfortunately, he didn’t ride at our parade time because of the road being too wet for the horse. Safety first! But if you can imagine the park being totally silent (seriously!) and the all of the sudden, the clickety-clack of a horse, and he emerges from the shadows with a rider that has no head?!?! Creepy much?! But way thrilling and super cool!!!!!! 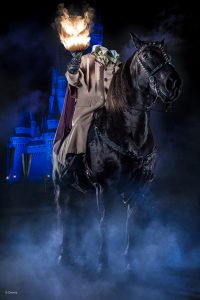 As the parade begins, you are greeted by yours hosts Mickey, Minnie and the gang! 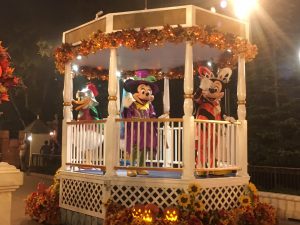 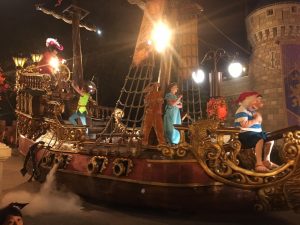 The pirate ship is, by far, my favorite pirate ship around, and makes me want to join the Pirate League! Onboard, you can see my favorite captain, Captain Jack Sparrow!! In years prior, Barbossa used to walk next to the ship and interact with the crowd more. This year, even though he was on the ship, I felt some Disney Magic as he singled me out for a sword/saber fight. I think we all know who would win that duel! 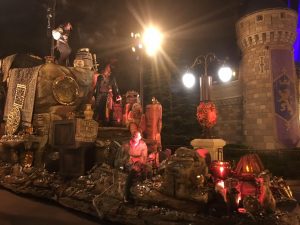 Even though I love my pirates, the graveyard diggers have my heart. The sparks their shovels make just give me chills! We were at a bad angle this year, but I managed to record a section of their stalk! 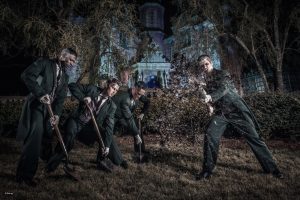 What Disney Halloween Parade would be complete without Hitchhiking Ghosts from the Haunted Mansion?? They’ve materialized along with the ballroom dancers for your entertainment! 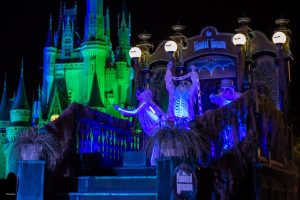 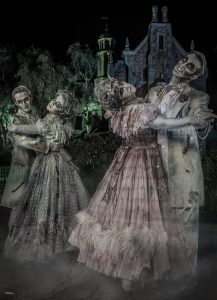 The parade, in years past, would end with Goofy’s Candy Company bringing up the rear and cast members handing out candy. Unfortunately, this is no longer happening. Wreck it Ralph and Vanellope Von Schweetz close this parade out, but with no candy. 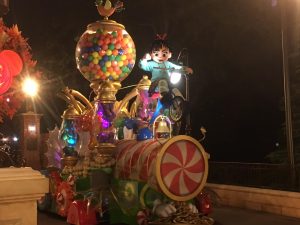 Disney Diva Disclaimer: The Memory Maker images in this article are stock photos provided by Disney when you purchase Memory Maker during this time of year. Tips from the Disney Divas & Devos does not claim any copyright of these images and they are being used solely for promotional purposes of the event.