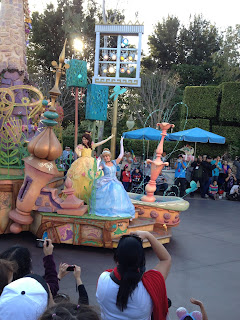 Mickey’s Soundsational Parade at Disneyland is now two years old, but it remains a fun, popular parade in the park. The parade celebrates the best of the music from Disney films and has terrific floats filled with all the favorite Disney characters.

The parade normally has start times of around 3 p.m. and 6:00 p.m. (times do change with the seasons and park hours, but this is a general guide). During the Christmas season, it is put on hiatus for the Christmas Fantasy Parade. The best seats for the parade are always on Main Street, but here’s a little secret- over by the Mad Hatter shop on Main Street there are some great seats! Be sure to find your seats about a half hour or more before parade time. The space fills up fast!

Mickey’s Soundsational Parade begins with a drum, and then the Mickey float with his friends appears. On this float you will see Minnie and Pluto as well. Shortly behind the float are Chip and Dale with Goofy.

Next comes Aladdin and the ever popular Genie. Be sure to keep an eye out for Abu as well!

The Little Mermaid float cruises in after Aladdin, with Ariel on top of a bubble and Sebastian driving a chariot. Several sea creatures join in the singing and playing fun, with some of the best music of the parade.

The princess float is perhaps the most popular float as it is your opportunity to see Snow White, Rapunzel, Sleeping Beauty, Belle and Cinderella all in one place. Get ready to take a picture!

The Simba float is next, but this float is not just about the Lion King. Be on the lookout for King Louie from the Jungle Book and Terk from Tarzan as well. “The Circle of Life” is playing on this float. 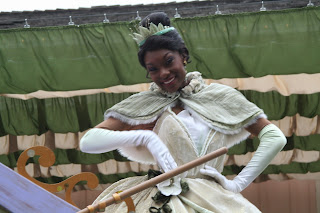 Peter Pan, Captain Hook, Mr. Smee and Tinkerbell can all be seen on the next float. Peter had better use his pixie dust to get away from the pirates chasing him! 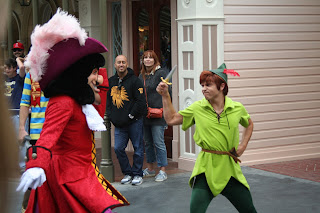 The parade concludes with the ever popular Mary Poppins. Mary and Bert are riding on carousal horses, but it is the chimney sweeps that steal the show with the ever catchy “Step in Time” song. This is D’land Diva son’s favorite part of the parade.

The parade is about 20 minutes long, but very entertaining and worth the wait and time spent. The next time you are at Disneyland, be sure to check it out!