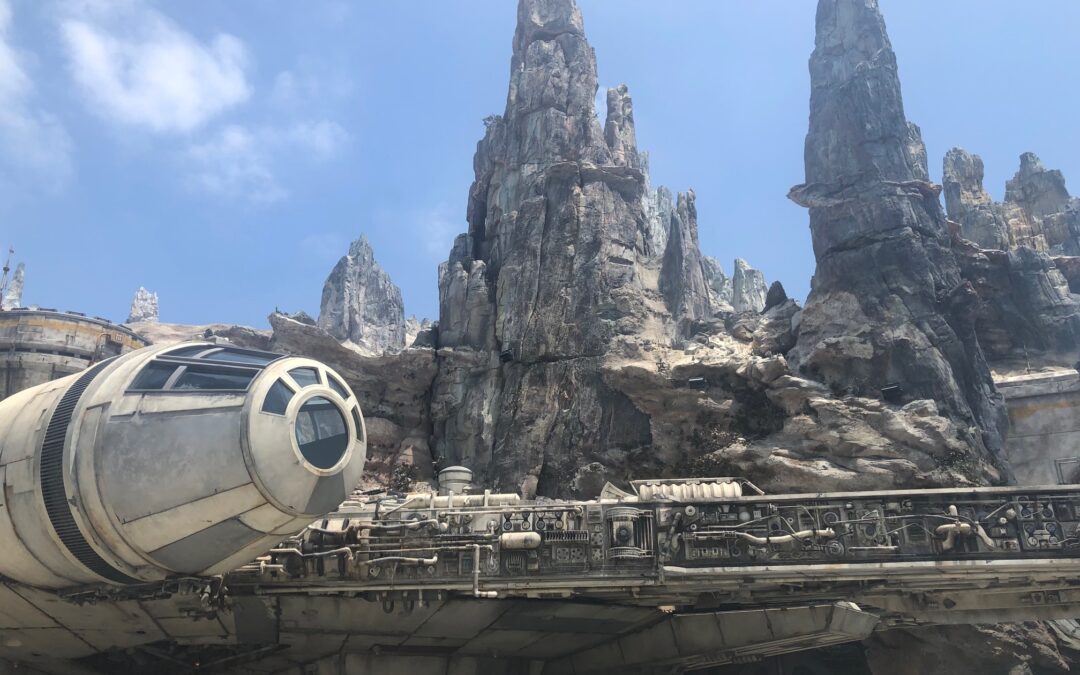 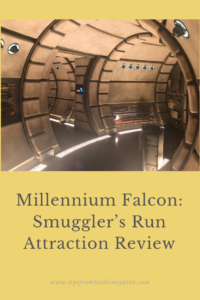 Exterior queuing line and backside of the Falcon

In Disney’s words, you will fly the Millennium Falcon on a thrilling interactive smuggling mission in this attraction. That sums it up well, but I’ll give you a few more details. SPOILER ALERT – I will be giving you details and photos from inside this attraction so only continue reading if you understand that. The height requirement for children riding this attraction is 38-inches or taller and child swap is available. 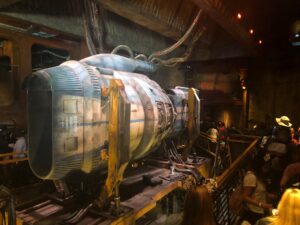 As I had two reservations to visit Star Wars: Galaxy’s Edge, I was able to ride this attraction twice. Our wristbands were marked by Cast Members when we rode so that kept us from riding more than once during our reservation period, but you can go back and ride single rider more than once. The first time we rode, the stand-by line length was listed as 45 minutes and the second time was 25 minutes, and this was pretty accurate. The line begins outside under shelter where you can see the backside of the Falcon and winds up into the attraction building. Once inside, the line loops around and ramps up towards what we guessed was a ship’s engine that looks like it is in some state of repair. The line isn’t interactive, but there are games for this line available on the Disney Play app, which we started to use, but the line was moving quickly for us and we missed some of the items we needed to scan and stopped playing. This line can be boring for children as there isn’t much to see or do, so parents be prepared. Also, it smelled like rubber. 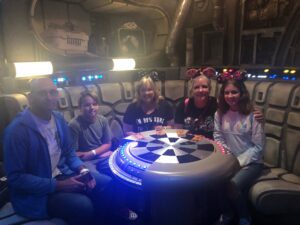 After leaving the room with the engine, we went through another queing area with windows to the outside to see the top of the Falcon and finally entered the preshow room. Here, Hondo Ohnaka the smuggler explained our mission to fly the Millennium Falcon for him to collect cargo. My initial reaction seeing Hondo was that he was a Cast Member in costume. This Audio Animatronic is AMAZING! I was distracted by how lifelike he was and missed a bit of what he was telling us (I listened better the 2nd time we rode). He gets permission from Chewbacca, who shows up on a screen, to let us fly the Falcon for him. 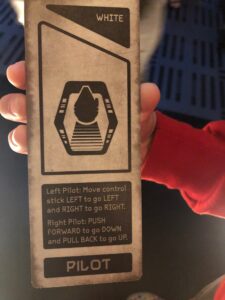 After the preshow, the line splits in two and each group headed down another hallway to get into flight groups of up to six guests. Each guest was given a colored card with a job – left pilot, right pilot, gunner (two) or engineer (two). The card is handed to you, but you can switch jobs with anyone else in your group. Our group was 5 so a single rider joined our us as one of the engineers. Then we moved into the Millennium Falcon lounge – yes, THE LOUNGE where they play Dejark (the holographic chess game) and there is the table where you can sit, but sorry, no pieces show up. We spent a few minutes here before our group was called to make our smuggling run. We then proceeded down THE Millennium Falcon hallway, which made me want to run like Han Solo to the cockpit, but I controlled myself and walked. We then stopped in front of the cockpit door and lined up according to our jobs. We were given another briefing by Hondo and then the doors opened. I was Right Pilot on my first run and Engineer on my second. 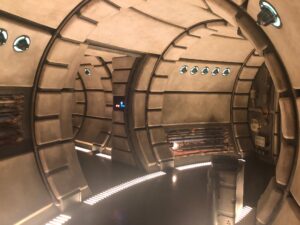 The hallway to the cockpit

There are two pilot chairs in front, the gunners behind them, and the engineers in the back. I will leave the details of where we fly and what happens as a mystery for you to find out for yourself, but I will explain what we learned about each job. The left pilot has a joystick that directs the Falcon left or right and a few other buttons to hit during flight. The right pilot has one that steers up or down, and also a lever to jump into lightspeed (that was the BEST part of being the right pilot). The pilots steer the Falcon away from obstacles and other fighters. The gunners have buttons on the wall to punch to hit targets and try to keep us safe from Tie Fighters and such. The Engineers have multiple buttons and switches that they are to hit when they light up, which fixes damaged parts of the ship. 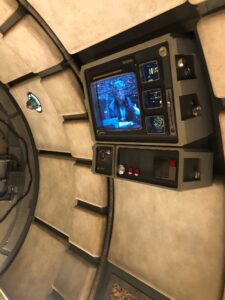 Last words of encouragement from Hondo

Credits are taken off what you earn from Hondo from your run based on how much damage you do to the Falcon. All of this is summed up at the end of the flight, and both times we ended up in the 3,000+ range, which I hear is pretty bad. We crashed into a lot of stuff.

Our thoughts about each job – being a Pilot is uber-cool. It was by far the most fun anyone of us had on this ride, especially the Right Pilot and jumping us into hyperspace. It allows you to follow the action outside the cockpit windows and really feel like you are interacting with the ride. I am not sure how much I was controlling the ride though. Sometimes I felt like the joystick was super sensitive and other times it didn’t seem like it was reacting at all to what I was doing. The gunners had fun too, since they also were looking out for targets to hit. But being as the button was on the wall next to you, it did mean you had to twist your body to both hit the button and see out the windows or keep your arm a bit awkward along the wall. Everyone agreed the Engineer was the least favorite job. There is no reason to look out the cockpit windows since you have to watch the wall to wait for buttons and switches to light up and hit them, which means you miss a lot of the action. I ended up delaying a lot of my button pushing so that I could enjoy what was happening out the cockpit windows. I think this job could be eliminated and I would have been happier as just a passenger, as say Princess Leia was. 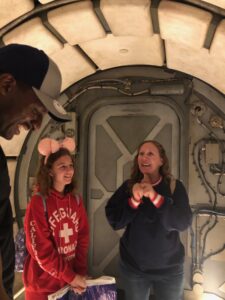 My son gets motions sickness from most motion simulators. He cannot ride Star Tours without getting a queasy stomach and a lingering headache. But he wanted to try this, so we let him be the left pilot. Having some control over what the ride was doing did seem to help. He said that his stomach didn’t get queasy, and while it did give him a small headache, it wasn’t as bad as when he rides regular motion simulators.

Even with some of the shortcomings for the Engineer job, we all still loved the ride and yelled and hollered at each other in joy and surprise throughout, including the others guests not from our party in the cockpit with us. I can CERTAINLY recommend that you give this attraction a try. I am not sure what my wait tolerance will be for this one, as I know the line will be long once they open fully to the public. I would certainly wait 60 minutes, and maybe up to 90 for this ride. I would probably skip it if it was longer, but if it was my one and only chance to ride this ride at a wait longer, go for it at any wait length!

When you are ready to make your Smuggler’s Run, contact Patricia at All For Dreams Travel for a free vacation quote.

Hello! I'm Tinker Belle Diva. Just like you, I love all things Disney and have since my first trip to the Walt Disney World in 1980, followed quickly by my first trip to Disneyland. The love of Disney runs strong in my family and has been passed along to my daughter and son, who have been to Disneyland more times than I can count!