The Music of Pixar Live! at Hollywood Studios 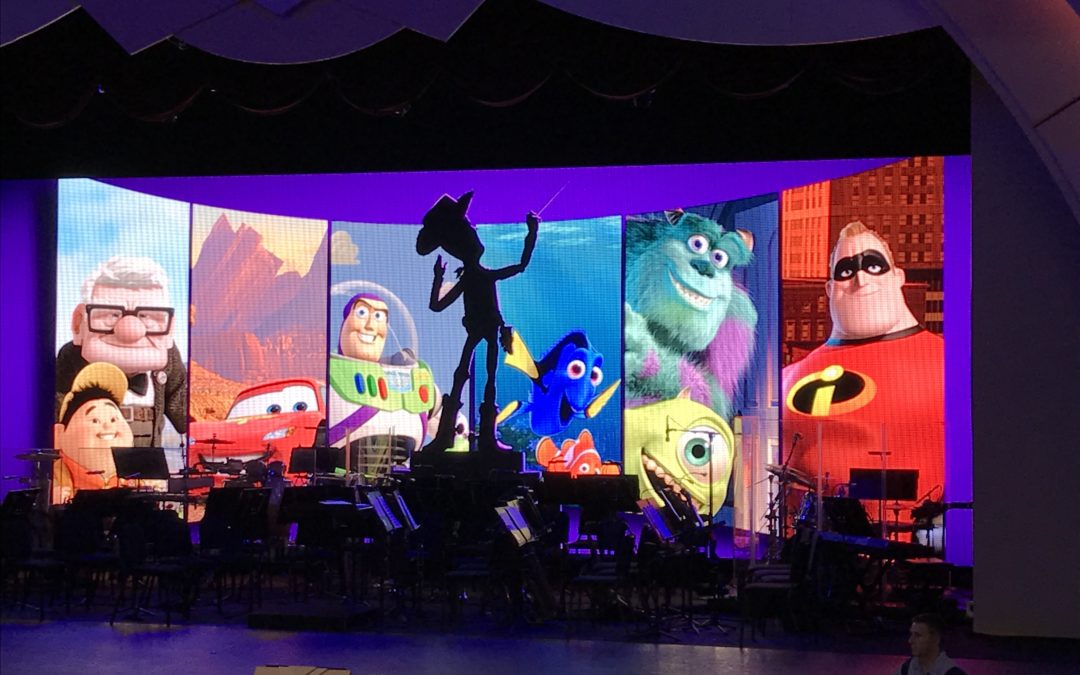 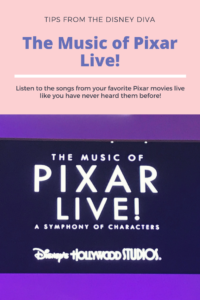 The Music of Pixar Live!

Music plays a special part in movies.  It sets the scene.  It lets you in on what a character is feeling.  You may not even notice it in a particular scene, but it is there doing it’s magic.

Currently at Hollywood Studios they are showing The Music of Pixar Live! for a limited time.   This nightly show is in the Theater of the Stars (where the Beauty and the Beast show resides).  The show is around 40 minutes.  They have added cushions to the seats and it’s covered, so it’s a nice place to relax or get out of the rain.

The music selection is not always the most known selection from the movies.  It may not be the most popular song from the movie.  Or even have any lyrics that accompany it. Along with the orchestra there are video clips from the composers letting you in on some background information on each selection.

Many Pixar movies really hit an emotional nerve.  This concert is no different.  It starts out with UP.  It starts with the opening montage with Ellie and Carl.   I have yet to watch the beginning of the movie and not cry.  This was no different.  Between the live music and the movie clips you are transformed into the world of UP. 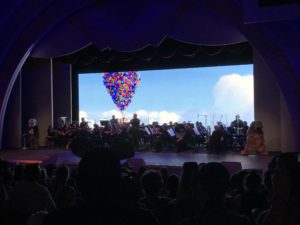 After UP, in no particular order, the orchestra plays music from Cars, Finding Nemo, Finding Dory, Monster’s Inc, The Incredibles, and I believe ends with Toy Story.  Once again, the emotion attached to the end of Toy Story 3 comes rushing back.  The story itself is bittersweet, but being enveloped in the music takes it to a new level.  I saw a few others wiping away tears as well, so I know it is not just me.

Before each new movie a few of the characters from the movie come out.  If they are unable to come out (Cars or Finding Nemo characters) they have a pre-recorded message from them. They stay for a few minutes before the music starts and they leave the stage.  Most of the characters come out again as the orchestra plays “Friend like me.”

We enjoyed the concert.  The kids did a good job of paying attention (they are 6 and almost 4) for the full 40 minutes.  It helped that the characters broke up the music.  There are also large screens that show clips from each movie.  My kids have not seen every Pixar movie yet, but they still enjoyed the show.

While the Theater of the Stars is large, you may want to get there early to get a seat.  There really is no bad seat.  While you are waiting there are polls posted on the big screens.  They relate to the Pixar movies and are fun to play while waiting.  Questions were like: where would you like to vacation?  And it gave four choices from spots from the new Cars 3 movie. 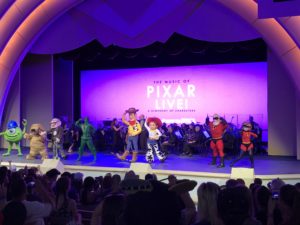 A few of the characters during the finale.

My almost 4 year old’s favorite part was waiting for the show because the Green Army Guys are there.  They walk around and mess with audience members.  He thought they were hilarious and it made the wait go by much faster.

If you have the chance to see The Music of Pixar Live! you should go.  The musicians were talented, the selection emotional and the seats pretty comfy! Consult with our FREE Disney Diva Travel Agent Patricia from All for Dreams Travel to plan your vacation now!