A Journey through runDisney’s Star Wars – Dark Side Challenge 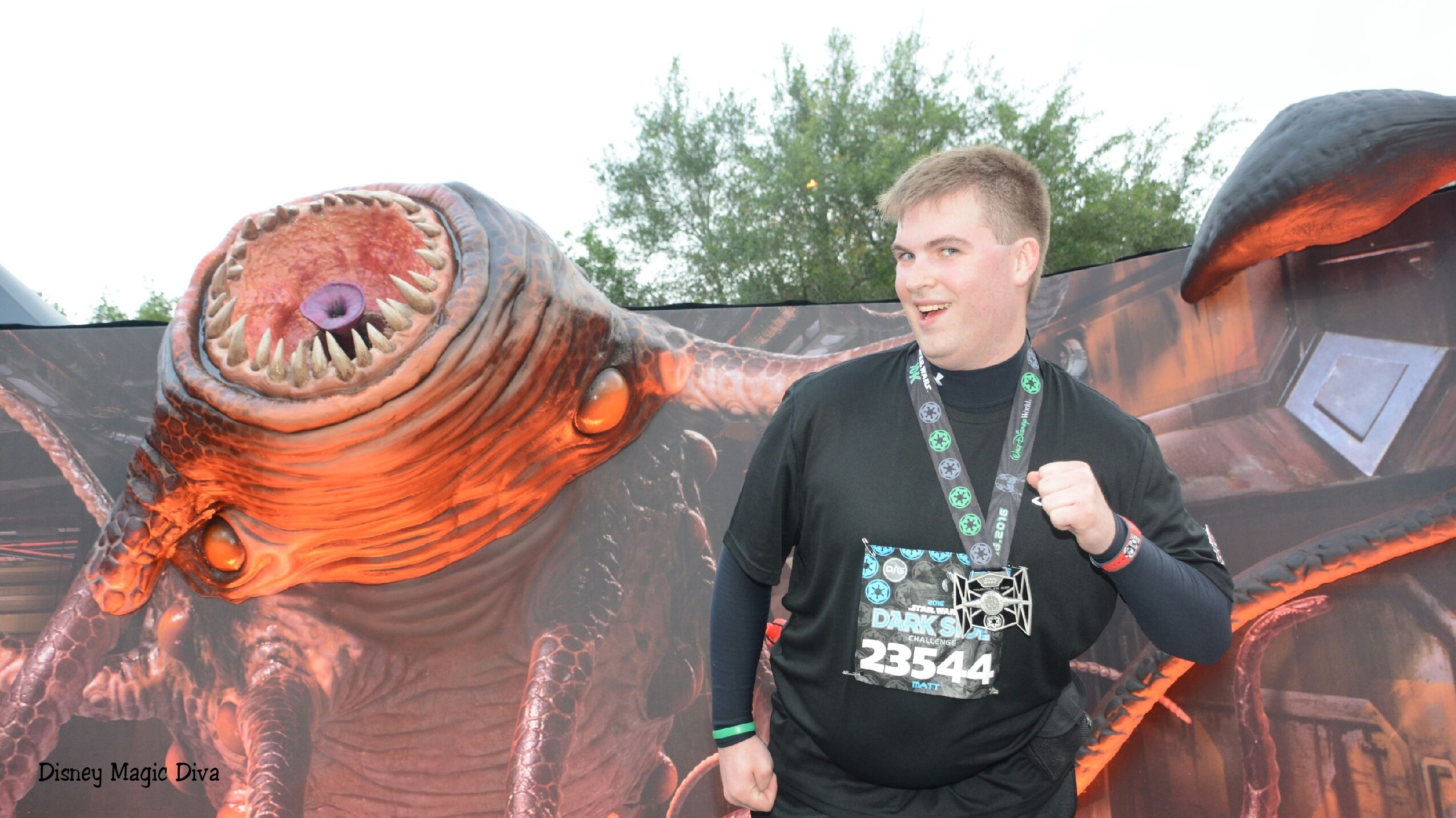 When runDisney announced it would hold the Inaugural Star Wars Half Marathon – The Dark Side at Walt Disney World Resort, there was little doubt my family would be attending. Disney Magic Son and I had participated in the Rebel Challenge at the Inaugural Star Wars Half Marathon at Disneyland in 2015, so of course we would be taking on the Dark Side Challenge. Well, he would anyway. I’ve since hung up (make that burned!) my running shoes, but The Force is strong with him, so he was up for the challenge. Here is his review:

Peace is a lie, there is only Passion.

Through Passion, I gain Strength.

Through Strength, I gain Power.

Through Power, I gain Victory.

Through Victory, my chains are broken.

The Force shall free me.

While normally an adherent of the Jedi Code, the Sith Code certainly does have its place for running. Especially if you are half-crazy and running the Dark Side Challenge.

For those who aren’t familiar, runDisney’s Star Wars Half Marathon – The Dark Side, consisted of a series of races run in Walt Disney World Resort. Runners could choose to participate in a 5k, 10k, and/or a half-marathon. If you were lucky enough to have registered for it, there was a special Dark Side Challenge for doing both the 10k and half marathon. That’s where I come in.

I’ve never been a Dark Side fan, but I have been an Imperial apologist. The Empire is the rightful galactic government by law after all. Signing up to join the Imperial Navy would be vowing to protect and defend the law. Not everyone in the Empire is a bad guy. They just happened to be ruled by awful people. So when the chance came to join ranks with the Imperials, I signed up in a heartbeat.

runDisney events are different than local races. I’m not bashing on local races, I love them! But runDisney races have a special atmosphere of crazy and kind people that share a passion for running, Disney, or the theme of the particular event. It makes it for a more communal feeling. When the theme is Star Wars, the passion is intensified.

Star Wars boasts one of the greatest fan bases in the known galaxy. They crash ticket websites after 88-second trailers. They raise millions for charity because there is a one-shot-in-a-million they’ll go to a movie premiere. They spend thousands on costumes to be movie accurate and join the Imperial 501st Legion, the Rebel Legion, or Mandalorian Mercs. Everyone has a Star Wars story; these are just the self-proclaimed diehards.

When runDisney puts together a Star Wars race you expect out-of-this-world costumes, kind people, and lots of amazing music. The Star Wars Half Marathon – The Dark Side didn’t let me down. Given all the wonderful articles available about how to prep for a runDisney race, I’m going to focus on what made the Dark Side Challenge special. (Click here for Run Diva’s answers to the Top 5 Questions people have about a runDisney event,  here for Darlin’Diva’s Tips for runDisney over 50, here for Character Diva’s tips on Kids’ races, and here for Disney Magic Diva’s experience earning the Coast to Coast medal.) 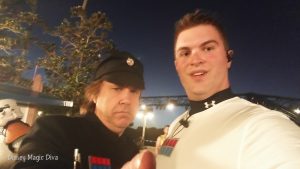 Perhaps the most special aspect of the race is the people. While waiting in the corral for the 10k I talked with some ladies who had run the Star Wars Half in Disneyland and were here to earn the Kessel Run medal (for completing both Star Wars Half Marathons in the same calendar year). We spoke of the new movies, speculated about who Rey’s parents are, and debated the differences between Disneyland and Walt Disney World races. We had differing opinions (I prefer Walt Disney World courses, they were Disneyland fans) but it was fun and really helped pass the time. On the course, true runners passed me and yelled out encouragement throughout the entire race to keep going. Fans gathered in groups based on costumes for selfies (Imperial Officer Corps represent!). Truly, you will never find a hive of wonderful superfans like those who love Star Wars. 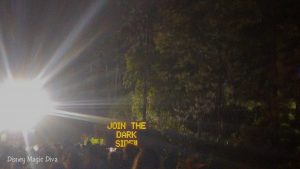 Next up is the course. I’ve done the Princess half marathon where we started and ended at Epcot with a down-and-back trip to Magic Kingdom, but this course took us through three parks: Epcot, Hollywood Studios, and Animal Kingdom. From Epcot to Hollywood we took the sidewalk that runs along the river ferry-boats use to go between the two parks. If you are curious, running seems faster than boats, but with several thousand people around you it’s also very crowded! From Hollywood to Animal Kingdom was a lot of highway, but we got great sunrise photos of Mt. Everest and the Tree of Life. 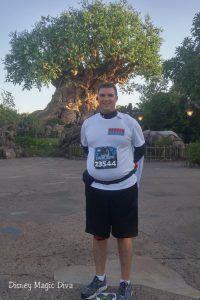 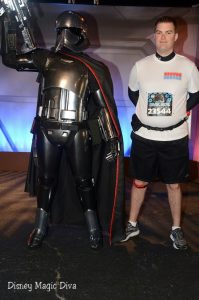 The characters on the course also make this a special event. Disney PhotoPass photographers were available throughout the course to take pictures with great icons in the background, or with the special Star Wars characters (BB-8, Chewbacca, and Darth Vader were the most popular).  Want a picture with Captain Phasma? Better stay late or arrive early to the races. She wasn’t out on the course but in the staging areas for the start and finish lines, and you could wait for your photo with her.

Running is a great time for thinking, but I also love these courses for the music they play. Star Wars has one of the most instantly recognizable sound tracks ever, from the Imperial March to Cantina Band to the Yavin and Endor celebrations. Throughout the course runDisney had set up sound systems with multiple speakers to blast the music for us, often with fan-made mashups from pop songs or DJ’s to cheer us along. If you want the ultimate Star Wars music experience though, you need to go to Symphony in the Stars at Hollywood Studios. Best Disney fireworks.

Finally, the spectators make Star Wars great. The support from groups like the Imperial 501st, Rebel Legion, and Manadalorian Mercs made for great pit stops for a selfie with your favorite trooper, hero, or bounty hunter. 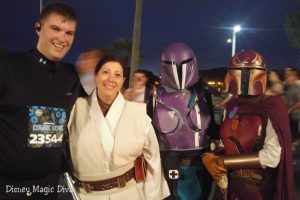 And as is traditional at runDisney races, spectators had wonderful with motivational signs. While the Princess half marathon had one sign I’ll always remember (“Run like Gaston just proposed!”), the Star Wars universe opens itself to some great running signs. One simple one was “My best friend died on Death Star 1. RIP TK 421”. Another I loved was a fan in Chewbacca pajamas with a sign, “ARRRGGHHHA”. “You still smell better than a Tauntaun” was teamed up with, “Do. There is no try.” 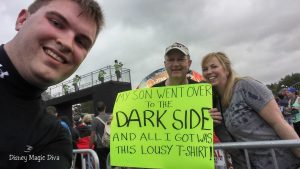 Of course my favorite sign came from my personal ChEAR Squad, “My son went over to the Dark Side and all I got was this lousy t-shirt.” The Force Awakens spoiler: Had I known this sign was being made I would’ve gotten my dad a great Han Solo outfit to wear, just for the extra laugh value. 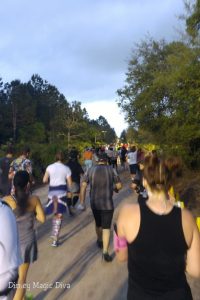 The narrow dirt path that led us into ESPN Wide World of Sports. Thankfully it wasn’t raining, or this would’ve been a mud pit!

The course had some downsides. First is with all the runners the pathways narrow and fill. Between Boardwalk and Hollywood Studios became a mash of people and often resulted in walking when jogging would be preferred. The same is true of the dirt path into ESPN Wide World of Sports, which we could all be grateful wasn’t wet and muddy. But even that had its own charm of being like the forest moon of Endor. The weather stayed great for the runs until my final hour of the half marathon. But if the heat turns up, just turn down the pace and know allowances will be made.

The character lines at the end of courses require patience (not a Dark Side value). Same deal with the bus lines after the course. But I took the opportunity to drink three PowerAdes and eat two bananas.

I love Star Wars races. I love the fans, the music, the race. I love the feeling of finishing just under my goal (2 hours, 58 minutes when I was aiming for 3 hours) despite being sick, hurt, tired, and hot. But even with all the passion for this, there is no way the runDisney Star Wars Half Marathon – The Dark Side goes on without thousands of volunteers and cast members setting up, staying on the course the entire time, and taking it all down. To all of you, thank you. You are part of an extremely memorable weekend for me. 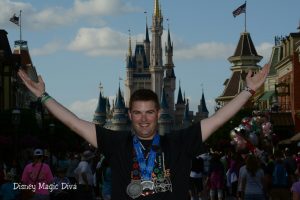 On our last day in the parks, a cast member helped me find my conclusion to this story. I was wearing my ‘I Did It’ Dark Side Challenge t-shirt with pride when he pointed to me and said, “You know that shirt is wrong. It needs to say, ‘We Did It’ because without everyone else you are just a guy going for a morning walk.”

The Sith Code is about selfishness. I guess that’s why the bad guys don’t win: Star Wars is about alliances, sacrifice, and family. If you are looking to experience Star Wars in a completely unique way, come join me in Disneyland this January for Star Wars Half Marathon weekend. Together we’ll rule the galaxy (or at least the course). After all, I still want that Kessel Run Challenge medal!