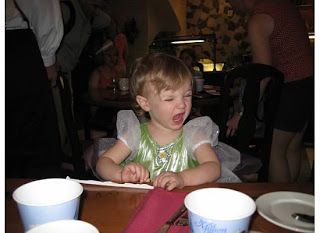 When most of us dream of taking our little darlings to Walt Disney World, we envision them laughing gleefully and running up to Mickey for a big hug – just like in the ads. My oldest has always adored characters. So we decided that no trip to Disney World would be complete without breakfast with the Princesses in Norway and a side trip to see the Mouse himself.

Littlest, however, has an almost primal terror of all characters. Her first Princess breakfast was a disaster! We repeated to our teary 18-month old that they were “just nice ladies in pretty dresses”, over and over. So much for magical. However, after that experience she happily posed with every Princess we encountered.

The costumed Characters, sometimes called “rubberheads”, are another story entirely. On our daughter’s first trip she took a standoff approach. They were okay – as long as they didn’t touch her. 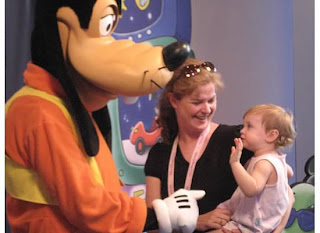 Tragically, instead of getting over it by our next trip, she got much, much worse.

I naively scheduled a Character breakfast at Cape May Cafe early on in our trip. It was, in fact, one of my favorite breakfasts. The food at the buffet was marvelous – and there was lots of it (unlike Norway where you get a tiny plated portion to serve four people.) My oldest reveled in the attentions of Minnie, Goofy & Donald Duck in their cool surfer clothes. Littlest, however, dove under the table any time one came near. Needless to say, there are exactly ZERO pictures of her with Characters on that visit. 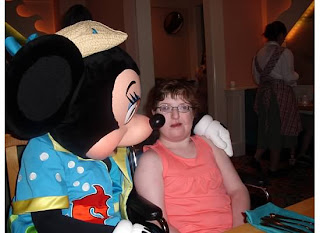 We’re heading back in a few weeks. I didn’t schedule any meals with the fully costumed Characters. However, I couldn’t resist reserving our traditional Princess breakfast in Norway toward the end of the trip.

It’s not uncommon for 3 & 4 year olds to be afraid of costumed characters, but Littlest is now 5-1/2. Just to see what we might be in for, we went to Chuck E Cheese last weekend. Predictably, my oldest loved every minute. Littlest was happy – until Chuck E Cheese made the rounds. As soon as she saw him, she began to shake with terror and begged to be taken home.

So, since going home won’t be an option when home is 1,000 miles away, how do we handle the larger than life Characters at Disney World?

1. Well, first we’ve told her that they are just people in costumes – like on Halloween. I know, I know! It destroys the magic. But if it also dissipates the terror, am I really wrong?

2. Today I asked her to play “real or not real” with me. The final tally – Real: Santa, Easter Bunny, Tooth Fairy, and leprechauns; Not Real: Tinkerbell, Mickey Mouse, Chuck E Cheese…I find it sort of sad, but I hope knowing that they aren’t real will help her handle the Characters in the parks. After all, I still love them all even though I know they aren’t real.

(side note: Disney Diva did this with her daughter also and now, at 6, she is completely ok with each and every character. She was terrified when she was 4, but at 6, its a whole new party).

3, Most psychologists suggest that you deal with fears by “desensitizing” the person, for example, gradually having a person who is afraid of heights go up a ladder. However, its nearly impossible to find a 5 foot tall mouse most places (except Chuck E Cheese – and look how well that worked for us!) The best we can do for now is spend time watching Disney Jr. and lots of Disney movies so she gets comfortable with the Characters. However, doing something like having them imagine the character coming up and asking them how they feel over and over again will help. Even if they just imagine it, if they can begin to learn to calm themselves down it will help.

4. My plan is to make sure that she sees the Characters from a distance. Most of the Cast Members understand that some children are frightened and approach them carefully, waiting to sense their reaction.

5. You can ALWAYS tell your waiter ahead of time to tell the Character Handlers to stay further away and wave from a distance. They’re great about keeping them from coming close if you request it. If she is frightened of them at a distance, I plan to redirect her attention away from the Character and toward something positive – like checking the map for our next ride or looking for the nearest snack cart.

We’ll have to split up so my oldest can visit with the Characters and get autographs, but that’s ok because each child gets some one-on-one time with mom and dad. Maybe after a few days, Littlest will start waving at them from a distance.

I suppose it’s too much to hope a hug this time around, but a girl can dream, right? After all Disney is where dreams come true!